'Who will guard the guards?' is a rhetorical question manifested in the plight of the fallen icon

• He died after being shot nine times by wildlife rangers on March 30, 2016 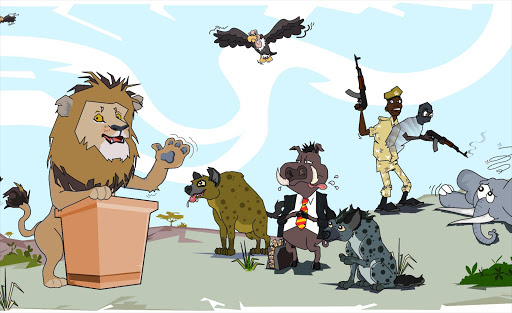 Until his execution on March 30 last year, Mohawk was truly a Lion King at the Nairobi National Park / BWANA MDOGO

THEY SAY democracy is power to the people,

But how can Wanjiku the Commoner have power,

When the law of the land is not in her hands?

Power is to the officials they delegate,

Who abuse it, and when it’s time to investigate,

The hammer of justice hits the nail on the foot,

Slamming the petty offenders, not those who loot.

Now Nairobi Park is crying this madness has reached them, too!

THEY SAY heavy is the head that wears the crown,

My mane is ringed with a mohawk of stress,

From outsiders breaking the law to get ivory in their hands.

Some animals offered to help me rule, and I asked: “How?”

So I gave them the power to keep the park safe,

But they took for themselves all the milk and honey,

Leaving Tumbosi the Vultures the only ones eating.

Now my kingdom is dying and I’m wondering what to do.

THEY SAY your name is Esijar and you’re a ranger,

I heard that from an elephant you’d sworn to protect,

The law of the jungle could not keep him from poachers’ hands.

I’d greet you with “Jambo”, but that reminds me of my fallen friend,

He fell to a rifle that looked ... just like yours!

But yours shoots darts to sedate, right?

Wait, why are you pointing the gun at me?

I’ve strayed? My ancestors used to roam this land!

Until you fenced us in and charged tourists to see us;

Now a railway is trespassing and the boundary is broken.

THEY SAY a flea can trouble a lion more than the lion can harm a flea,

So why are you just watching as people throw stones at me?

Roar! They are taking the law into their hands!

Bang! They sear into my torso,

Bang! A king’s worst slayers are the guards,

Bang! Who’d sworn to protect him!

-‘Wanjiku’ is a generic term for the ordinary citizen in Kenya.

-Mangiri is derived from ngiri, which in Kiswahili means warthog or wild pig and in Sheng (Kenyan slang) means a thousand shillings, with “ma-” denoting plural.

-Fisadi is from the Kiswahili words fisi (hyena) and ufisadi (corruption).

-Tumbosi is from the Kiswahili words tumbusi (vultures) and tumbo (stomach). “Eat” in Kenya informally refers to elected officials enriching themselves illegally.

-‘Esijar’ is a loose pronunciation of the SGR (standard gauge railway) project running through the Nairobi Park, whose construction broke the current on the park’s electric fence

last year and led to at least three lions 'straying'.

-Jambo is Kiswahili for hello. It rhymes with jumbo, a synonym for elephant.

Tom Jalio is a writer-journalist whose works include the Babishai Award-winning ‘There was once something special here’ (http://bit.ly/SthSpcl), ‘No rest for the wicked’ (http://bit.ly/NbiGrit), ‘Mama Africa gives birth to poetry’ (http://bit.ly/8thBabishai) and ‘Anatomy of a serial plagiarist’ (http://bit.ly/RdscrPlgrsm). He was a judge at the 2016 Kampala Toastmasters Challenge.

Rest in peace, Mohawk the Magnificent

• Mohawk reigned successfully not only because of his power but also coalitions
Sasa
6 years ago
by Tom Jalio @tjalio
Sasa
25 March 2017 - 00:00