Those not tech-savvy lose clients, while home visits come with risk of rape

• Police demand bribes to let them work, and the hard times are making some suicidal 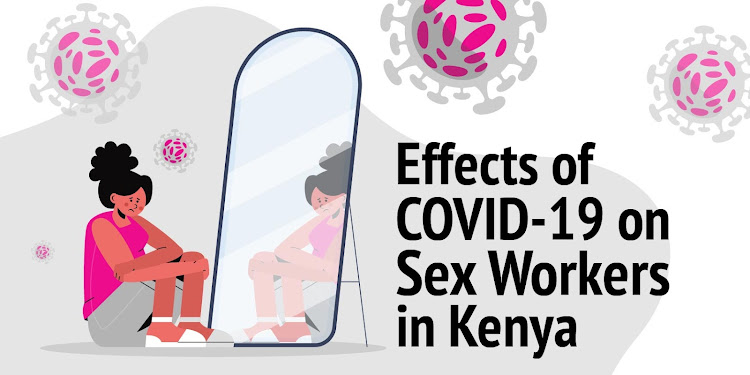 Wanjiru M, 26, has been working as an escort since she left high school. On an average day, Wanjiru would make Sh5,000 to Sh10,000 per day. With that, she was able to pay rent for her house in one of the middle-class suburbs in the city, pay fees for her daughter in a private school, and regularly send some little money to her mother upcountry.

Four years ago, she started saving for a downpayment for a mortgage she was planning to take in 2020. Then the pandemic happened. The government took broad measures to prevent the spread of Covid-19. It limited travel and imposed curfews and early closure of clubs, bars and other public venues.

The measures curtailed Wanjiru’s ability and that of other female workers to engage in street-based sex work. The ever-present danger of being arrested for sex work was worsened by the fear of being detained for violating the curfew.

Wanjiru is quickly running out of her savings as she struggles to continue working as an escort. On a good day, she counts herself lucky if she makes Sh2,500, which is a fraction of what she used to make pre-corona. She has also had to downsize and cut back on her expenses as she tries to cope with the situation. She withdrew her daughter from a private school and registered her in a public school. She has also had to move to a cheaper house to save on rent.

The curfews, which have been in place since March last year, have meant she has not been able to access her customers, many of whom she would meet in hotels, bars and nightclubs for sex work. The partial easing of the lockdown measures and the reduction of curfew hours from 8-10pm has not made her work any easier.

“There are fewer clients. Those who l get prefer to pay me less for my services because they no longer have as much money as before,” Wanjiru says.

“Those who still have jobs complain they have had their salaries reduced and expect me to give them a ‘discount’.”

LEFT TO OWN DEVICES

Wanjiru is better off than many of her colleagues engaged in sex work. They are marginalised, stigmatised and criminalised for their work.

Many of them have been pushed further into poverty, which is the reason cited for engaging in sex work in the first place, while others have been forced to take unnecessary risks to provide for themselves and their families.

“The choices are stark. You are faced with the option of not using protection or using a condom. You also risk catching the virus. It is not as if you can wear a mask throughout,” Achieng O says.

There has been no evidence of sexual transmission of Covid-19. However, sex work involves close contact between sex workers and clients that creates an opportunity for respiratory droplet transmission.

The emergency responses implemented to cushion vulnerable communities from Covid largely ignored commercial sex workers. This group was left to devise its own means to survive the impacts of the pandemic.

Amnesty International appealed for their inclusion in July last year. It says they have largely been excluded globally from social and economic support schemes. They have also faced increased criminalisation, diminished access to health services and lack of protection from violence. This has pushed them further into poverty as many of them have become victims of emergency responses that have been punitive and discriminatory.

Many of the CSWs have fallen victim to police abuses, where they are indiscriminately arrested and threatened with arrest unless they pay bribes to the policemen to be able to work.

The social support and food care packages offered to those in the low-income bracket have had little impact on the commercial sex workers, many of whom were not included or even considered for the support, which was short-lived. They did not receive any form of relief from the government.

These girls are having a hard time. They are not able to go to the brothels where they were working from. The closing down of hotels, the curfews and the social distancing measures have really affected them

WORK DAYTIME OR AT HOME

There are an estimated 20,000 commercial sex workers in Nairobi, most of them women. Even though Kenya does not criminalise sex work, laws such as those forbidding “living on the earnings of sex work” and “soliciting or importuning for immoral purposes” are used to oppress sex workers.

The Covid-19 regulations have made the workers more vulnerable as they are either forced to seek clients during the day and, therefore, be very visible to the authorities, or to break the curfew at night. Social distancing and mandatory mask-wearing are not possible due to the nature of their work.

Peninah Mwangi is the executive director of Bar Hostesses’ Empowerment and Support Programme, which works with commercial sex workers. The programme teaches female sex workers how to negotiate with clients, keep safe when out with clients or when a client becomes unruly, as well how to properly wear condoms, and how to negotiate for the use of a condom without losing the client. Peninah says they also provide free condoms and lubricants to members.

“These girls are having a hard time. They are not able to go to the brothels where they were working from. The closing down of hotels, the curfews and the social distancing measures have really affected them,” she says.

Tabitha Chege, a field officer with the Kenya Sex Workers Alliance (Keswa), says the closure of hotels, restaurants and other entertainment venues has been a big blow to them.

“Many of our hotspots are closed. Our working hours are also limited due to the curfew. We are now having to offer home-based services. But this comes with many challenges as it is very risky for us,” she says.

Arranging assignations with clients to meet at a client’s home exposes the women to attacks or even rape. For those women who are mothers, it has become increasingly difficult for them to bring clients home because their children have been home from school. Travel restrictions also meant many of them cannot send their children to relatives upcountry.

As sex work is still considered ‘immoral’ by many, sex workers also face challenges bringing their clients home because of the stigma associated with their trade. Chege says neighbours frown upon such behaviour and sometimes call the police on them.

To deal with these challenges, a few of the women who are tech-savvy have started using one of the dating apps available to offer their services. However, most CSWs cannot use the apps as they are tech-illiterate and not many of their clients are aware of such apps.

Wanda Njoki* (not her real name) is one of the few CSWs who have been using the dating app to get clients. “We went online. There is an app we use to get clients. We shared the app with our colleagues and our regular clients who are now able to contact us,” she says.

“For virtual sex, we charge between Sh1,000 and Sh2,000 an hour. The client has to make a 50 per cent deposit in advance and the balance after the session.

“But we still face problems as some of the clients refuse to pay. We also use the app to link up with our clients. The app allows our clients to choose which services they want.”

Through the app, clients can decide whether they want to have face-to-face sessions, engage virtually and even where to meet. For Njoki, clients who want to have in-person sessions have to come to her house as she is wary of going to a client’s house, which makes her vulnerable to attack or worse. She charges premium fees for those clients who visit her at home.

Those not using the app have found ways of getting clients through social media and arranging to meet.

“Most of our members were really depressed. Some of them even committed suicide,” Njoki says. 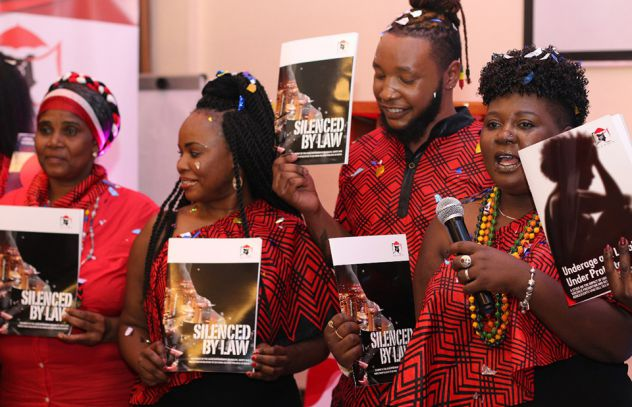 Kenya Sex Workers Alliance members during the launch of two community-led research reports pre-Covid-19: ‘Silenced by the law’ and the ‘Legal Literacy for Sex Workers in Kenya’
Image: UNAids

In June 2020, Chege says, two of their members reported feeling suicidal due to the difficult times they’d fallen into. The organisation noticed a worrying trend.

During their weekly meetings, most of the women started showing up drunker than usual, visibly high on drugs or stimulants. She says this was a clear indicator to Keswa that all was not well with the girls. Like everyone else, their mental health was at risk and they had to do something fast.

“We set up a toll-free number for counselling when they felt overwhelmed. The government did not help us but we received help from Red Cross, who donated foodstuffs and other basic necessities.”

She says the toll number has been receiving 10 calls a week on average, of which two or three were serious and necessitated in-person counselling. Those in need of help can call the hotline via +254 707 225 813 and get psychosocial help at any time of day or night. These necessities include access to family planning products, access to ARVs for those who are HIV+ and other services.

Helgar Musyoki is the head of the HIV Prevention Unit at the National Aids and STI Control Programme (Nascop). He says Nascop worked with other stakeholders to ensure the interest of key populations, among them sex workers, were taken care of.

“Sex workers were able to access food baskets, disinfectants and sanitisers in the drop-in centres donated by various agencies, including UNAids, Global Fund and US Agencies (Pepfar),” he says.

Musyoki says more than 4,500 sex workers received the food baskets, which contained maize flour, cooking oil, ndengu, rice, sugar, bread, tea leaves and salt. The cost for one basket is around Sh2,500, and it was distributed weekly. It was an emergency intervention that ran for three months between September and December last year and was only available in Nairobi.

Some customers working from home, others broke.

Vihiga sex workers shift to daytime due to curfew