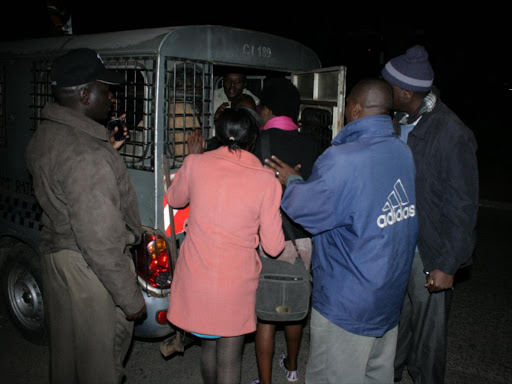 Exploiting loopholes left by delays in repealing some sections of the Penal Code to remove outdated and unconstitutional laws, they carry out mass arrests and extortion, mainly targeting the poor.

For easier preying, police have profiled residents, mainly youths in low-income areas, as criminals, subjecting them to unjustified arrests and intimidations to obtain bribes.

The officers carry out massive swoops, mainly on Friday evenings, and demand bribes to free the "suspects", forcing the victims to part with between Sh500 and Sh3,000 to buy their freedom or spend the entire weekend in police cells.

touts, especially after terror attacks, during curfews or before high-profile public events and trade conferences.

Other regular victims of surveillance, arbitrary arrests and detention include sex workers and human rights defenders.

The officers round them up without explanation.

"Suspects" of the petty offences and innocent poor arrested in the swoops are taken to court, and mostly charged en masse with crimes determined by the police, if their families and friends are unable to raise the bribes over the weekend.

The "suspects" are charged with varied "offences", including idling, begging, loitering, drunkenness, disorderliness, prostitution, indecent exposure and nuisance, among other misdemeanours.

And in most cases, due to ignorance of their human rights and fear of further harassment, they plead guilty to the charges to avoid lengthy and costly trials.

The constitution says a suspect should be told reasons for their arrest before the arrest but police have refused to observe this requirement with impunity.

Police officers have continuously disregarded the laws that require them to identify themselves as officers of the National Police Service before arresting suspects.

The victims are subjected to physical and sexual assault, harassment and degrading treatment during arrest and detention, unfair bail terms, irregular fines and sentencing practices, profiling and stigma, as well as threats and intimidation, even while in custody, charged with the petty offences.

Some of these arrests are carried out as part of a strategy to clear streets of “unsightly” people.

This leaves police cells and correctional centres overcrowded, with most of those arrested and remanded or convicted for petty offences they never committed.

Neither Charles Owino, the Kenya Police spokesman, nor George Kinoti, the National Police Service spokesman, answered calls to give insights and reasons for the arbitrary

Njonjo Mue, the chairman of the

International Commission of Jurists Kenyan chapter, blamed the rights abuses on the continued application of laws and policies that indiscriminately target the most vulnerable groups in society.

Mue said most of the

to facilitate colonisation and suppress resistance to colonialism.

Mue said the continued implementation of these laws that attract criminal sanctions for petty offences subject individuals to unparalleled human rights abuses by law enforcement officers both at county and national levels.

"Consequently, and as documented by numerous reports and research findings, these laws and policies and practices around their enforcement often result in systemic human rights violations," Mue said.

The Bill of Rights in chapter four of the constitution made some of the legislations unconstitutional, but the laws have not been amended as required. Police and county enforcement officers still use them to humiliate the poor, as gross violence goes hand in hand with their enforcement.

During the national conference on decriminalisation and re-classification of petty offenses on March 30, Chief Justice David Maraga recalled his predicament in the hands of police who had arrested him for loitering in Nakuru town, while he was a university student.

"I had to point at the house I lived with a relative before police released me, after doing rounds in their car for hours. You can imagine how many poor Kenyans still suffer the same today if they are not as lucky as I was to be released," Maraga said.

"Laws designed to impose criminal sanctions to punish idleness, begging, loitering, drunkenness, disorderliness, prostitution, indecent exposure and nuisances, among other misdemeanours, should not have a place in this progressive legal climate."

Maraga said the misdemeanours should be made “fine-only offences”.

Stakeholders in the conference were deliberating on legal, policy and institutional reforms regarding the handling of petty offenders that must take into account the constitutional provisions and standards on the enjoyment of human rights by all without discrimination.

They are campaigning for change of the structural, policy and legal basis that have led to criminalisation of poverty and vulnerability by the government and authorities.

They are working to identify gaps in legislative, policy and administrative frameworks, whose implementation and enforcement results in human rights abuses against the poor.

For example, the recent National Council on the Administrative Justice (NCAJ) Report on the Audit of the Criminal Justice Systems in Kenya revealed that more than 75 per cent of prisoners are aged between 18 and 35, with most of them being petty offenders.

The audit said justice is swift in the management of petty offences and sluggish on serious offences.

The report further said the pre-trial detention periods remain excessive, a state worsened by lack of access to legal aid and intrinsically linked to poverty due to unreasonable or excessive bail conditions for the petty offences.

The limited treatment facilities for persons with mental disorders when

in conflict with the law,

and bureaucracy required for their release, predisposes

them to potential abuse while in detention, the survey revealed.

Maraga said the constitution details protection of the right to dignity; freedom from cruel, inhuman, or degrading treatment or punishment; right to equality and freedom from discrimination.

The CJ said the constitution also outlines the rights to freedom of movement; fair trial and administrative action; rights of accused persons; right to health; and access to justice — which are guarantees for all individuals, poor or rich.

"These guarantees notwithstanding, the current legal framework for petty offences provides for outdated, obsolete, vague, unrealistic and unnecessary offences that must be struck out from our statutes," Maraga said.

He said this necessitates an audit of all petty offences to establish the efficacy of retaining them in the law, and their cost of implementation, human rights abuses resulting from their enforcement and their contribution to the good and well-being of the society.

"There is indeed need for a paradigm shift in handling issues of petty offences through strengthening accountability and transparency mechanisms within the criminal justice sector," the CJ said.

"As such, law enforcement officers should be held to account and where found culpable, be disciplined, arrested and prosecuted for corruption, human rights violations or abuse of office."

Maraga said the County Government Act in 2013 repealed the Local Government Act, but the by-laws passed prior have remained in force, pending amendments by county governments.

He said the government has enacted the national policy and action plan for human rights, sentencing policy, active case management guidelines, and the bail and bond policy guidelines and the Legal Aid Act, 2016.

Jedidah Waruhiu, a commissioner with the Kenya National Commission on Human Rights, said the custodial sentences for petty offenders have caused congestion and poor conditions in penal institutions.

it is expensive and wasteful

to remand and imprison petty offenders.

"Any economist will tell you for free that it is expensive and not economically prudent to remand and imprison petty offenders. Do you know how much it costs to maintain a remandee or prisoner in the police stations or remand homes or prisons?”

Post a comment
WATCH: The latest videos from the Star
by JOSEPH NDUNDA @Joseph_Ndunda
Big Read
12 May 2017 - 01:00
Read The E-Paper