Rituals in some cultures scar widows while they are still mourning

• Rituals aimed at ‘chasing away the demons’ ensue, their right to property disregarded 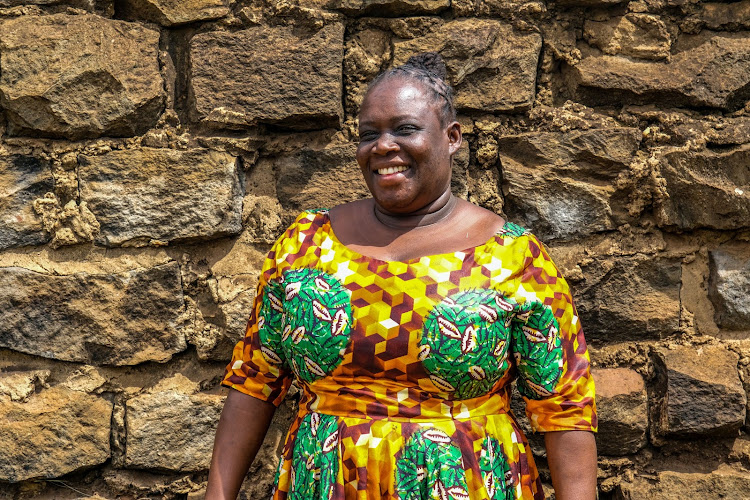 A jovial Janeiscah Oyora. She lost her husband in 2007.
Image: MAGDALINE SAYA

When you lose your spouse, your world changes. You are gripped by grief and sorrow over the loss of a loved one, a friend and sometimes a breadwinner.

Despite being the time when widows need emotional support, this day, however, marks the beginning of their nightmares.

Janeiscah Oyora lost her husband in 2007. Born in a family of 16 siblings, she ran away from her home while she was 16 to stay with her aunt.

Her dream was to be a dressmaker.

At 21 years, she met and got married to her now late husband, who was 40 years then. But her marriage was not rosy.

Within the first year, her husband became bedridden.

In the first three years, she had three miscarriages, something that made her have bad blood with her in-laws.

When he died in 2007, she was two months pregnant. Has was from Rongo while she hails from Nyakach.

“By the time I was getting to this marriage, already the guy was taking ARVs but he didn’t share with me. He would bring everything as I was a housewife but I was not happy. I used to be sickly.”

However, before returning to the city, there was something she was supposed to do.

In some cultures, widows are considered impure, and tradition dictates that they must be “cleansed” of their partner’s death.

The aim is to chase away the demons. The ritual requires women to have sex either with a relative or stranger.

She had to be cleansed or risk being shunned by the society. The cleansing ritual is followed by traditional inheritance, in most cases getting married to a brother-in-law.

“My mother-in-law called me after the burial. She wanted that I be given someone to sleep with; Luos do that but I was not ready, being a Christian,” she said.

“So when I denied, I just disappeared after three days and returned to Nairobi. I was having other stress, remembering that whoever was providing for me had died, so where could I get the interest to start sleeping with someone else?”

Shunned and abandoned by her in-laws, she had to face life on her own, a life she says was not easy. At some point, she had to move from a house she was paying Sh1,000 rent for to a cheaper alternative that cost Sh300 per month. All she wanted was a place to call home.

Her friends supported her, while World Vision at times provided her with food. She now has two children, a girl aged 13 and a boy aged five. But she has no plans of remarrying.

The only fulfilment is having achieved her dream: the dream of being a fashion designer of African print in Soweto slums, Kibera, where she stays.

“I faced stigma, very bad that it gets to a point you feel like you are a lesser person. People don’t want to interact with you; they would think you are dying the next day. But all in all, I keep sharing, I take my drugs,” she said.

She wishes that the government would empower women to be stable financially to be able to stand on their own. 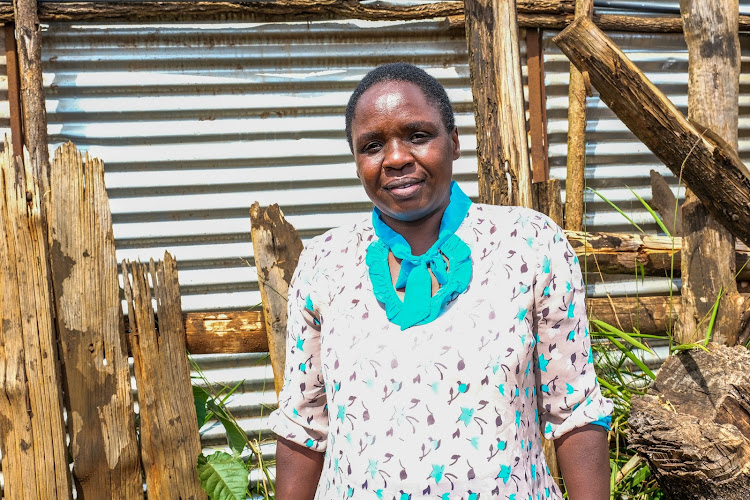 Ebby Igobwa was widowed in 2016. She had to take a cold shower at 3am as part of the burial rites
Image: MAGDALINE SAYA

Ebby Igobwa resides in Kibera’s Makina area. She became widowed in 2016. She lost her husband to HIV, too.

He had been sickly since 2012, but being a person whose job required a lot of movement, he would sometimes go without taking his drugs, something that made his health deteriorate fast.

Their daughter, who was a KCPE candidate by then, would leave her bedridden father in the house to go sit her exams. The second child was just three years.

The husband eventually died. When Igobwa went for the burial in Western Kenya, she had to be part of some rituals that were to be performed ahead of her husband’s burial.

“They tell you the dress you were wearing when he died, you are supposed to give out, however smart it was,” Igobwa said.

“Before the burial, you are woken up at 3am and you have to bathe cold water at that time, then you finish with the burial. After that, you have to stay alone. There is a notion that those who mingle with you will be infected by your bad blood,” she said.

Having been left alone with no one to support her, she had to come back to Nairobi to find a school for her daughter, who had passed her KCPE despite the circumstances.

But even her neighbours in the estate did not want to get closer to her. She was supposed to observe a 40-day mourning period.

“My neighbours were afraid of me. I could not borrow anything from them. Most transported their kids to stay with relatives until I could finish the 40-day mourning,” she said.

“After 40 days, there is a celebration I had to hold but I have never done it because of lack of unity in the family. I had to stay one year without a neighbour entering my house, until the stigma affected my youngest kid.”

She applied for the Wings to Fly scholarship for her daughter without success, but her pastor managed to conduct a fundraising that saw Sh80,000 raised to cater for her shopping and school fees.

The in-laws, however, took offence. They wanted a share of the contribution, too, but since it was inaccessible, they abandoned her to fend for herself and her four kids.

“From then I have nobody to hold my hand. Even the phone call, they only ask what a kid got in an exam and when they hear the score, they go silent,” she said.

She was all alone, with nobody to talk to or confide in. It took her time to adjust and take up her new role. The role as the head of the family; to pay rent, school fees and buy food.

“My advice to fellow women is, live knowing that any time life can change because you can’t tell what will happen next. Get ready, get a hustle even if it is doing laundry.” 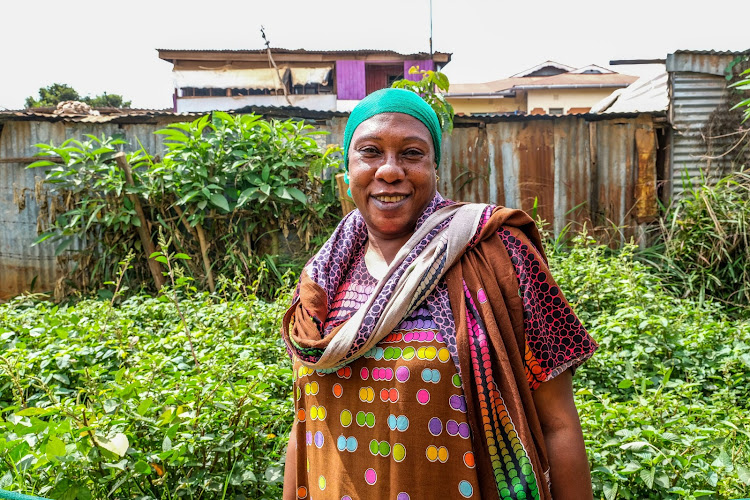 Widowed in 2001, Zuhura Suleiman has had court disputes over her late husband's property
Image: MAGDALINE SAYA

Zuhura Suleiman stays at the Makina magistrate's law court in Kibera. She lost her husband to arthritis in 2001.

That was the beginning of what she described as hell for her and her five children.

Immediately her husband breathed his last, her in-laws walked into her house, took over everything and left her with nothing.

She would drive her kids to school and drive herself to the market, but that was no more. Her car was taken away. The two other matatus they owned to help generate income were taken away. Documents were confiscated.

She was accused of killing her husband, with some saying she had poisoned him.

“They took everything. In our rites as Muslims, you are supposed to stay four months and 10 days in the house, but I never got that chance. I had to beg for food,” Suleiman said.

Friends abandoned her, they would change their routes on seeing her.

“In 2005, they brought thugs to cut me so that I leave the place, that is why I stay at the magistrate's law court. I left Mashimoni squatters because they had threatened to kill me should I fail to leave,” she said.

Suleiman, though aggrieved, did not give up easily. She began a legal process to see if she could get her family possessions back.

She won the case and the in-laws ordered by the court to return the documents and the vehicles they had taken.

“They returned but the car was spoiled; they poured salt in the engine so I had to sell the engine at just Sh40,000, and the vehicle was just two weeks since getting it from Mombasa port,” she said.

“Being widowed is not a joke. The moment you lose your husband, be ready to face all the challenges. It is like you are in another world, you will face things you have never done. I am still suffering to date. Things I passed through, I will only forget when I am lowered into my grave.”

She said the elders and Nyumba Kumi officials are not helping matters, mostly due to their demotivation as a result of poor and inconsistent pay. They only come in to address issues related to gender-based violence.

Suleiman called on all women to ensure there is a will that will help solve any differences in case of the demise of a spouse, adding that copies of the same should be served to various entities in case of any eventuality.

“If you are in a house with your husband writing a will, it is something very important because there is no way you will be victimised.”

She hopes one day the government will have a fund to help women who get widowed in an effort to help them get a bearing when they are left alone.

Clamour for property, kids as relatives take 'till death do us part' literally.
News
3 years ago
Robbed of estate by ‘co-relas’, widows unite to rebuild lives
Post a comment
WATCH: The latest videos from the Star
by MAGDALINE SAYA REPORTER
Big Read
23 June 2021 - 05:00
Read The E-Paper