Charity is helping families with basic needs and vocational training 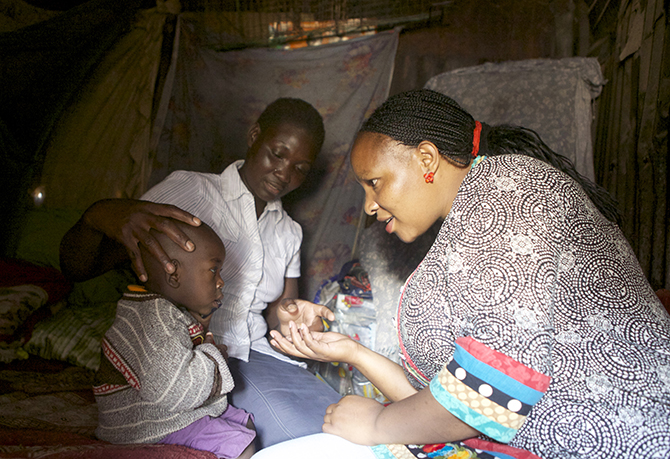 A large pig carcass floats down Nairobi River towards a ramshackle metal pedestrian bridge that leads to Mathare, one of East Africa’s largest slums.

Elizabeth Auma jokes the pig must have been overpowered by the toxic nature of her urine as it sought to quench its thirst.

The carcass floated for three days before a wave of effluent washed it downstream.

My only prior experience with this kind of toxic waste had been at Ngara, near the Central Business District, where bus and lorry drivers have set up temporary garages that empty oil, grease and other highly virulent garage waste into Nairobi River.

In Mathare, a sprawling slum in Nairobi, children in tattered clothes play with raw waste flowing from a burst sewage pipe. It includes black, grey, inky and oily liquids. Some of the children tell us they have been away from school for years for lack of uniform or fees.

In a nearby alley, crowded with tin-and-wood shanties, a food kiosk filled with people feasting on smoked fish stands on a burst pipe.

Metres away, a woman fries chopped potatoes on an open fire.

Before we venture into the slum near the former Drive Inn Cinema, guide Elizabeth Muuna of Tushinde Children’s Trust cautions that I summon enough guts to power me through alleys teeming with filth and humanity.

She warns against any form of photography that is likely to signal we are out to trade their plight with external donors. Such attempts will trigger instant attacks from gangs of preying youth, who take anything worth a pint of local brew.

Any form of photography means the camera or mobile phone is instantly donated to the kamjesh or local militia.

They are hawk-eyed, oversensitive and will prey on anyone who appears to interfere with or destablise the status quo.

Inside juvenile gangs idle students have flocked to

We are visiting as a follow-up to another tour in 2018 to see how the Trust is helping slum dwellers cope with high levels of poverty. It helps to pay for the education of slum children and also helps teens cope with menstrual circles by supplying sanitary pads.

Once a visitor walks into the neighbourhood carrying or wearing anything that can be cashed for as low as Sh100, marauding youth break into wolf whistles to signal a sporadic frisk and ‘disarm’ operation.

That normally leaves victims half or stark naked, depending on how expensively dressed they are. Or just how hungry the ‘hawks’ have been.

In my tattered jeans, sneakers and second-hand T-shirt, I still have a gut fear they may sense I don’t belong. My saving grace is that Muuna deals with them on a daily basis and, therefore, offers adequate protection.

In one of the shacks, uninsulated electricity cables hang precariously. Residents know it's dangerous but they claim they have little choice. A water-vending kiosk stands besides two dirty, poorly constructed pit latrines.

"Here we share everything because nobody can afford anything on his own. We share latrines… People selling food near latrines have no space to put kiosks. It must be near there because that is where you can find space," Paul Odero, 27, says.

"We have no place to dispose of our garbage, so we just throw it anywhere. At times, you find children playing with used sanitary pads because women and girls who use them have nowhere to take them. The children get diarrhoea and many die," he says.

At least three children died of electrocution in three months in 2012 as they played with illegally connected power lines. In the same year, an illegal electricity connection caused a fire that destroyed some 300 houses, leaving thousands without shelter.

Community health worker Janet Kairu says open dumpsites and fumes from the sites have triggered respiratory infections for many residents.

Many women in slums are unable to work because they are constantly looking after sick children. “Such mothers are permanently trapped in poverty because of lack of income. Unhygienic conditions make them very sick."

In 2010, the global health charity, Medicines Sans Frontiers, reported that pneumonia and respiratory tract infections accounted for 40 per cent of all consultations in its health facilities in Kibera slum.

An estimated 53 per cent of scavengers at a dumpsite in Dandora, another slum, have respiratory tract infections, coughs and asthma, reports Concern Worldwide.

The few toilets available in Mathare are privatised, and residents pay a user fee of Sh5. Many cannot afford the daily charge.

This means she and other extremely poor people living in urban slums, such as Mathare, are forced to significantly compromise long-term well-being to meet short-term survival needs.

This forces them to pull children from school and engage in transactional sex, says Mary Maiko of Unicef.

About a billion residents of the world's cities are surviving in deprived areas, such as Mathare, with no basic amenities.

The World Health Organisation says children in Nairobi slums are two and half times more likely to die before their fifth birthday than in other areas of the city.

Many young mothers can hardly afford food, meaning malnutrition for children under five years is high. Owino’s health centre can hardly cope with the high demand for basic health services.

The skyrocketing costs of food have pushed needy slum dwellers into extreme poverty. Unable to feed families or pay for basic services such as healthcare, rent or school fees, many often turn to crime to make ends meet.

As we walk through the second-largest slum in Kenya after Kibera, I note that the more than 600,000 residents are crammed in a 0.3 by 1.9 kilometres square area.

The sprawling area overflows with humanity, poverty and a desperate need for essential services. Electrical wires light up tin shanties made of rusty roofs.

A resident, Peter Ochieng, 25, says he last saw clean water supply more than 20 years ago, during the days of Nairobi City Council.

Muuna says because of Tushinde’s programmes, Mathare is becoming a better neighbourhood. Tushinde is also uplifting children whose future had drowned in poverty and hopelessness.

Children living here are voiceless and rarely get any education unless they are supported by charitable institutions and well-wishers, says Muuna.

Laurie Bidwell and Andrew Wright and a host of volunteers in the UK have constantly funded Tushinde’s programmes, which have rekindled hopes for thousands of vulnerable children directly or indirectly supported through community-based projects.

The group has set up schools, clinics and community groups that support children and families who would otherwise be tossed out of the safety net of available care.

More than 1,200 children are receiving education and a meal daily, while parents have been enrolled into micro-savings groups.

The membership allows them to pay for daily needs and build more durable houses.

Tushinde’s scholarships means children can enjoy a healthy lunch meal each day. This lowers the burden on parents and allows them to venture into a life of vision and promise.

The group is currently caring for more than 70 family members in Mathare slum, 269 of whom are below 18 years.

For Pamela Munguti, 13, Tushinde’s scholarship has allowed her to dream again.

Her mother died while she was still an infant. She and four siblings were raised by an aunt. Pamela struggles with chronic illnesses but still performs much of the cooking for the family.

Tushinde’s scholarship means she can walk from home to school daily and enjoy learning just like other children of affluent backgrounds.

Pamela’s mother died while she was a baby, and she and four siblings have been raised by their aunt.

She struggles with a chronic illness but still does cooking for the family.

Tushinde’s scholarship has allowed her to learn to play basketball in their overcrowded Mathare Primary School.

Slum upgrading becomes a reality with Mukuru in for drastic change

Tushinde Children’s Trust was set up in March 2010 after British philanthropist Megan Wright visited a project working in the Mathare slum.

Megan was moved by the deplorable conditions at the slum after discovering up to 10 people were living in a single hut made of wood, mud and roofed with corrugated iron.

There was no sanitation, legal electrical services or access to running water. She witnessed babies and children playing in dirt-filled alleys and open sewers. The toddlers were often abandoned by mothers at home as they ventured out to hunt for money or food.

One of Megan’s beneficiaries at the Mathare slum, Tito Kilemi, 18, can finally dream of becoming a civil engineer when he grows up.

In their small, dark home in the slum with no running water or plumbing, he fetches water for his single mother immediately he leaves school.

Another beneficiary, Juliet Akinyi, once dreamed of becoming a nurse but was married at age 16 before dropping out of school.

Life became even harder after her second daughter became malnourished. Tushinde’s life-saving assistance of rent, food and medical services has injected a new lease of life.

Tushinde’s social workers ensure a modest allowance for families surviving in abject poverty to cover the most basic needs, including food, rent and clothing. During times of crisis, such as the Covid-19 pandemic, Tushinde supplies food parcels, settles rent and other basic needs.

In recent times, Tushinde has ventured into a programme whereby they work with families by teaching them how to become financially independent through vocational training or offering modest grants that allow them to venture into income-generating activities.

With its limited resources and scope, Tushinde is striving to transform the lives of these children by offering them hope through education and giving them a regular feeding programme while they are in school.

Tushinde provides tailored family care and education to children from the poorest families in Nairobi slums.