Some 100,000 residents who relied on exploitative water vendors now get clean and affordable water ‘from the air’

• Aerial piping has so far covered 3.4km within the slum, with 25 water kiosks 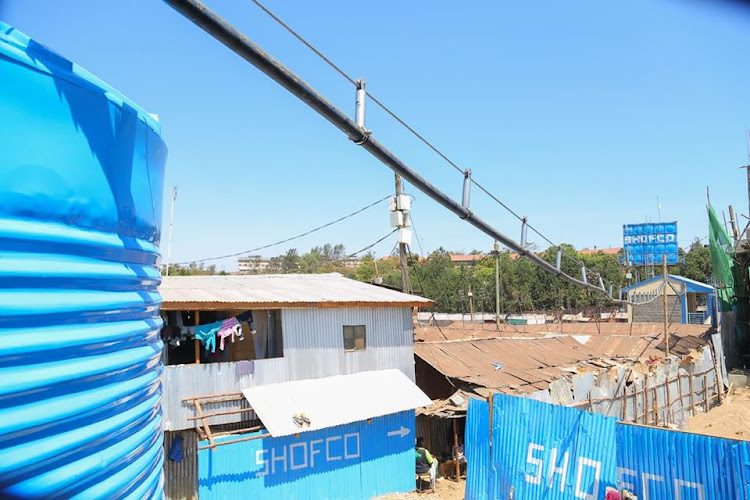 Glancing at the skyline of Kibera slums in Nairobi, one will certainly notice a complex network of power lines and blue overhead water piping system.

Huge, blue water tanks that supply the precious commodity to the residents are also visible, even from kilometres away.

Some four years ago, the skyline of the country’s biggest slum was quite different. It was only jam-packed with power lines and television aerials.

The overhead water piping system was not erected for aesthetic purposes. It was an innovative system designed by a Kenyan NGO, Shining Hope for Communities (Shofco), to supply water to kiosks using a network of elevated pipes.

Suspended pipes sought to crack down on vandalism and theft of pipes and end contamination of water while it was being supplied to up to 100,000 slum dwellers.

For decades, water cartels in the slum had made it almost impossible to supply affordable water via underground pipes.

The cartels uprooted pipes laid by suppliers, who would sell water to residents at cheaper rates.

Shofco was also a victim but after giving it careful thought, the organisation designed a system does not involve the digging of trenches and laying underground pipes.

The organisation adopted a system using overhead pipes supported by poles. The pipes terminate at water kiosks located in strategic parts of Kibera.

Johnstone Mutua, a programme officer at Shofco, said cartels would not allow outsiders to supply clean water to residents at lower prices.

“We would lay pipes and then the next morning find them uprooted. It then became a very expensive affair since vandals would go away with the pipes after uprooting them. Every week, we had tampered pipes and contamination cases,” he said. 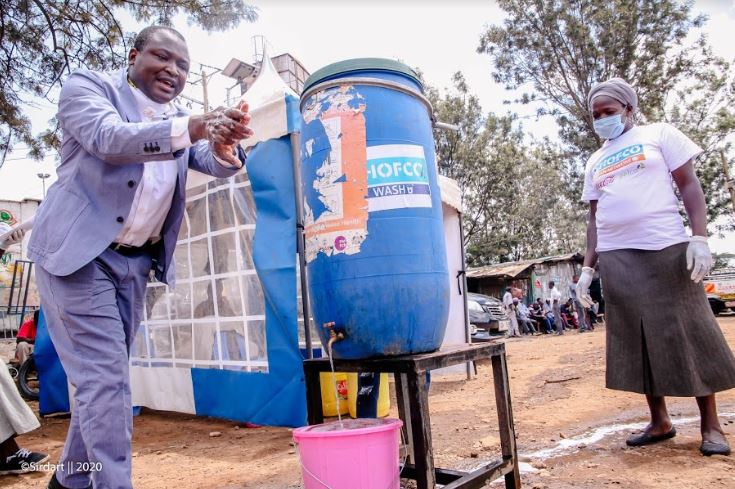 A 20 litre-jerrican at a Shofco kiosk goes for Sh2, while with other water vendors, particularly those controlled by cartels, the same amount goes for between Sh5 and Sh10.

Mutua said the aerial piping has covered 3.4km in the slum, with 25 water kiosks. One water kiosk serves about 60 household a day.

“The piping is cheap to maintain because leakages can be spotted very easily. The problem of contamination also ended ever since we adopted the new system,” Mutua said.

The pipes are made from High Density Polythene (HDPE). HDPE pipe is a type of flexible plastic pipe used for fluid and gas transfer and is often used to replace ageing concrete or steel mains pipelines.

Made from the thermoplastic HDPE, its high level of impermeability and strong molecular bond make it suitable for high-pressure pipelines.

Mutua noted that they only have interruptions of water supply when there is a fire outbreak.

The organisation has directly connected supply to three learning institutions in the area and a community-based organisation.

“We are hoping to supply water to all schools and public facilities like dispensaries in the near future,” he said.

Four kiosks give water some 500,000 litres of water per week free of charge to the residents. This water is worth some Sh200,000.

“This is done where there is a lot of traffic. Residents really appreciate this gesture because cartels never give back anything,” he said.

No water! No fear! Leaders step up to coronavirus challenge 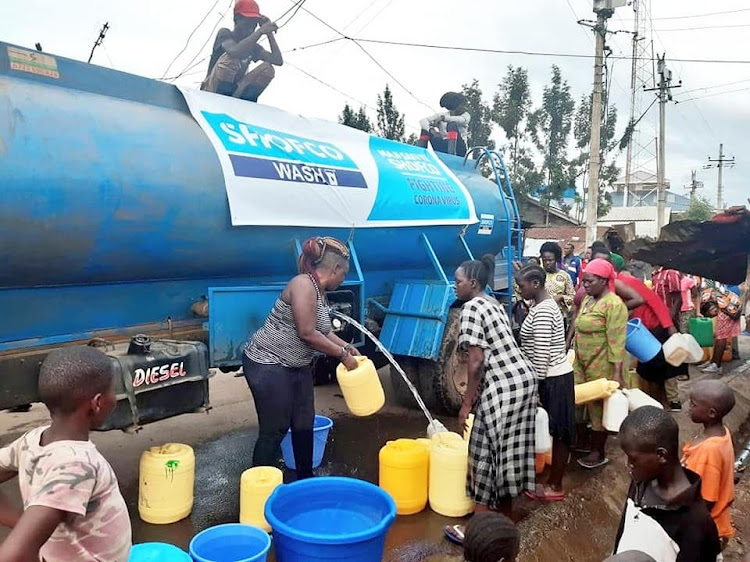 Partners in the project include Safaricom Foundation, the Heineken Foundation and The United States African Development Foundation.

Putting up one kiosk costs about Sh500,000, while a pillar for suspending the pipe will require Sh50,000 to erect.

Solar panels with floodlights have been mounted on the pillars, and they provide lighting from 6pm-6am.

“Water supply is constant because there are no leakages or cases of vandalism. The cost of water also went down drastically. We are no longer at the mercy of cartels,” she said.

Awino said she used to pay Sh5 for a 20-litre jerrican, but she now pays Sh2 for the same. “We also get free water on some days. Because of this, we guard the pipes and kiosks as if they are our properties,” she added.

“We nowadays don’t have those dark alleys where muggers would lie in wait for their victims. Everywhere is properly lit all night until early in the morning,” added the mother of four.

Nanashon Muguna, the managing director of Nairobi Water and Sewerage Company,  said with proper infrastructure, a 20-litre jerrican could even cost Sh1.

“One reasons why water is too expensive is because of illegal water vendors who want to make quick money,” he said.

He said most water pipes in the slums are laid above ground and are made of highly fragile plastic, which can easily be tampered with.

He added that cracks in pipes compromise water quality and expose residents to a wide range of diseases. 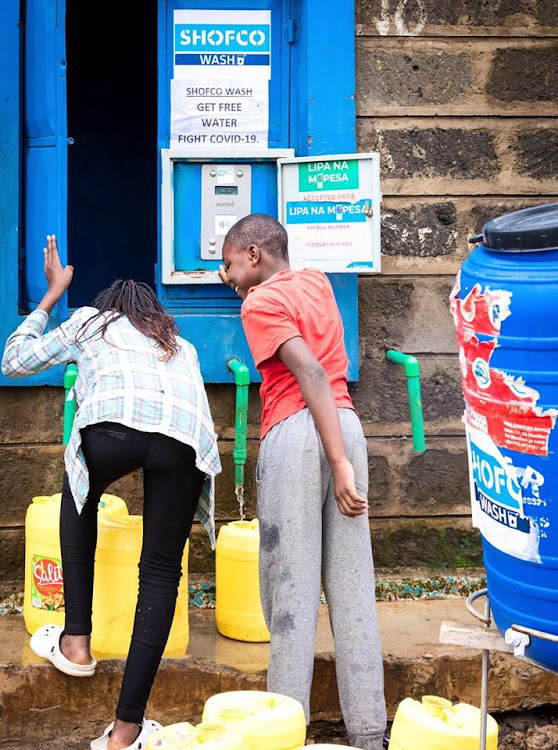 Residents at one of the Shofco water kiosks in Kibera
Image: COURTESY

In 2019, the Centre for Disease Control and the Kenyan Medical Research Institute, commissioned a project to evaluate the use, acceptability and quality of water provided by the Shofco system.

The project includes among other things water testing at Shofco and non-Shofco kiosks.

These interviews revealed qualities that influence people to select one kiosk over another, including regular cleaning, longer operating hours, and areas to wash clothes on-site.

Researchers asked residents about their experience with Shofco and non-Shofco water and how they decide what water sources to use.

Findings from the evaluation have been used to improve the quality and acceptability of water.

Kepha Obacho, the director of Public Health and Sanitation at the Ministry of Health, said waterborne diseases in the slums are usually caused by drinking contaminated water.

He named cholera, guinea worm disease, typhoid and dysentery as being the most common.

Obacho cautioned that water sources that look generally clean can easily become contaminated when there are leakages.

“Waterborne diseases can be stopped by ensuring we have correct sanitary sewage disposal, safe water piping materials and storage, and civic education on hygiene,” he said.

At the onset of the project in 2016, Safaricom Foundation funded the aerial piping to the tune of Sh12 million.

The system was designed by Kennedy Odede, who was raised in Kibera and founded Shofco in 2004.

Odede said the idea was conceptualised to beat the complicated and costly logistical hurdle of distributing water across an informal settlement.

This partnership will give a total of 100,000 residents of Kibera, most of whom have been forced to rely on exploitative water vendors for their daily water needs, access to clean and affordable water.

When commissioning the project, the then Safaricom CEO, the late Bob Collymore, said they had to step in and provide some homegrown support. “We urge other local organisations to join Shofco and us in this initiative,” he said.