Not yet uhuru for stateless Pemba

The Makonde, Shona and even Hindus have been recognised but not Pembas

• Oftentimes they live in fear of eviction as people take advantage of their vulnerability to deprive them of their rights. 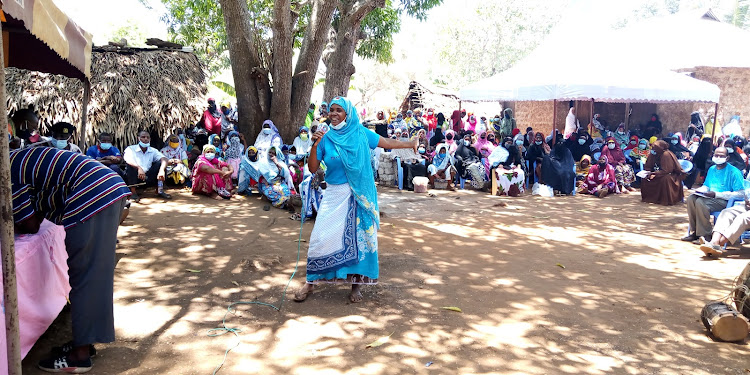 Sada Makame, a member of the Pemba community in Kwale county, has spent her whole life feeling devastated and uncomfortable on the only land she calls home.

Her voice breaks as she recounts her story, while tears cloud her eyes, turning them red.

“I was some months pregnant when police arrested and deported us to Horohoro in Tanzania, a land we know not,” she says.

The 52-year-old is one of the many stateless people who have suffered as they clamour for citizenship.

The Kenya Human Rights Commission estimates there could be more than 18,000 stateless community members in Kenya.

Some are the Makonde from Mozambique, Rundis from Rwanda and Shona from South Africa.

The Makonde are known as skilful woodcarvers and palm winemakers.

It is believed that the Makonde in Kwale came in the 1930s mainly to provide cheap labour for the Ramisi Sugar Company plantations, currently the Kwale International Sugar Company (Kiscol).

The groups claim to have suffered most during the old regime before the formation of the multiparty system.

The Pemba community, who are formerly from Zanzibar, are believed to have set foot in Kenya before World War II.

There are about 7,800 Pemba community members, at least those who have revealed themselves, but their chairman Shaame Hamisi says the number could be more.

They live along the coastal strip of Kilifi, Mombasa and mostly Kwale, in the small villages of Shimoni, Gazi, Mangwei and Kichakamkwaju.

They are known for their best techniques in fishing, sea diving and seafaring. 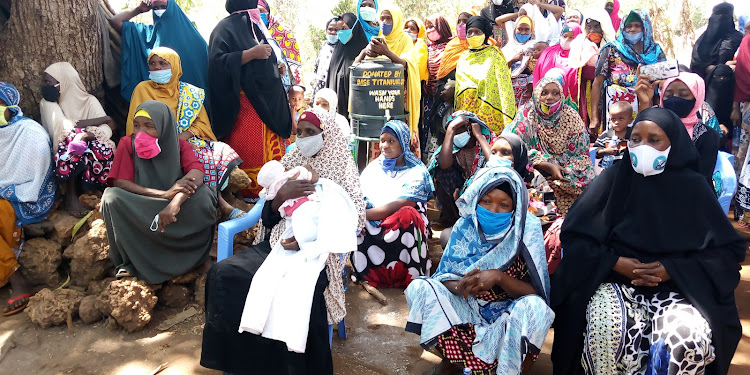 Makame claims to have been born in Kenya but is still waiting for recognition.

She said non-citizens have lived a hostile life with a lot of intimidation and harassment. Many have died while some got crippled for life, she added.

“I buried my father with some body parts missing,” she said bitterly, gazing in the direction of her ancestors’ tombs.

Makame said her father lost a foot while seeking refuge when police went to fetch them as they were considered aliens.

She said they had lived a life of pain, poverty, neglect and contempt.

“It was very hard to cross the ferry because once police recognised you, severe punishment would be unleashed on you just for being a Pemba, the one born within,” she said.

Kombo Haji, 58, recalls a day he came home from school only to find his parents had been arrested for lack of documents.

Haji said they had to survive on fruits and leftovers as parents were detained for almost a week.

He said in his early 20s, one of his brothers lost a child due to harsh weather as they went hiding in the forest.

“It was a chilly night during the long rains when police launched a major crackdown on the stateless people, forcing us to flee. Unfortunately, my brother lost his few-months-old baby due to pneumonia," he said.

Haji said the arrests were made frequently. A month could hardly pass without police raids.

Dila Hamisi still has a fresh memory of the beatings he received from police officers back in 1996.

He was below 18 years but his age could not save him from the corporal punishment.

Hamisi said they were picked from home and taken to court, sentenced to four months’ imprisonment before being deported to Tanzania, where they were also rejected.

NO EDUCATION, NO JOBS

Haji is a class three dropout just like many of his colleagues, whose dreams were shattered for lack of citizenship.

Life on the run could not allow them to proceed further in terms of education as most times they would relocate to safety.

Many job opportunities have slipped through Haji’s hands because of illiteracy and lack of documentation.

“I was to be employed as a senior sea harvest supervisor but it required that I present a national identity card and some academic papers, which I don’t have,” he said.

Their long sea expertise is almost going extinct. They are unable to freely practise fishing in the open seas.

Hamisi said the Coast Guards and Kenya Defence Forces patrolling the Kenyan oceans are always on their case.

They are kicked out of the water or sometimes arrested for having no fishing licences and permits.

The Kenya Coast Guard Service was established by the government under Guard Service Act, 2018 to beef up security in Kenya’s territorial waters.

Hamisi said it has been hard to process the required certificates because they don’t have any documents to present for registration.

Before, they used to seek temporary permits through the local administration from either chief or county commissioner’s office, but the government banned it.

The notifications could allow them to sail from Kwale, Mombasa, Kilifi and Lamu to fish.

They don’t have legal protection, the right to own property or access loans and proper healthcare services.

Oftentimes they live in fear of eviction as people take advantage of their vulnerability to deprive them of their rights.

Makame has thrice been conned out of her money in village merry-go-round women's groups after she used her colleague’s ID card to open bank and Mpesa accounts.

In a previous interview, the Kenya Makonde chairperson Thomas Nguli said land grabbers have been targeting the stateless communities.

The situation has left most to live like squatters in dilapidated makuti-thatched homes.

When the Covid-19 pandemic broke out in March 2020, some rights organisations raised an alarm that the non-citizens were hardest hit.

Only those with national identities were eligible for the food programme.

Their children can also not easily access bursaries and government sponsorships. 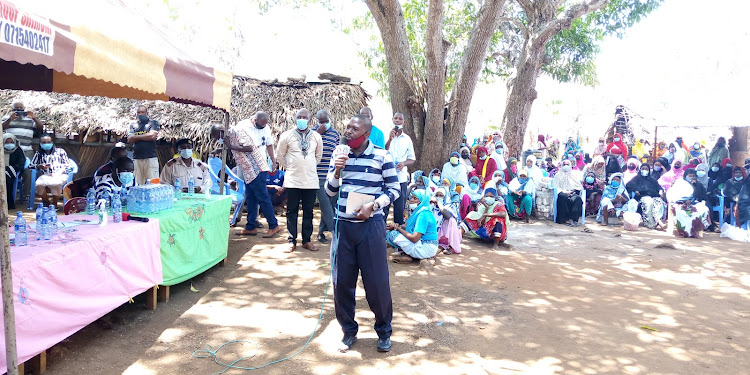 HISTORY: Pemba committee board member Bakari Mguta explains how Pembas came to be in Kenya at Kichakamkwaju in Kwale in March 2021.
Image: SHABAN OMAR

Initially, both Makonde and Pemba communities trekked together in search of citizenship, but in 2017 the government only recognised the Makonde as the 43rd tribe.

This is after the group marched from Kwale to State House, Nairobi, in 2016, seeking to be recognised as Kenyan citizens.

During that period about 1,176 Makonde people received national identity cards.

Later on, Hindus became the 44th tribe and Shonas followed as the 45th, although some are still sweating for citizenship because not all were registered.

Pemba committee board member Bakari Mguta said the Pembas could not be given citizenship because they were not prepared.

“Makonde had the required data about themselves compared to Pembas, who didn’t know their population,” he said.

The Pongwe-Kikoneni MCA said the Pembas were later advised to re-organise themselves and provide comprehensive information when needed.

Mguta believes Pembas originated from Kenya and should be relieved from the statelessness.

He said during the colonial period, some left the country to Zanzibar for farming and the Pemba island was named after they discovered it.

The lawmaker said political influence before independence made Pembas to be despised by the colonialists.

He said the Pemba community is the one that brought Arabs as reinforcement in defending the coastal strip, and the colonialists felt threatened to register them as Kenyans.

“The pre-colonial government feared the Pemba after seeing how aggressive they were in combat. That’s why they denied them citizenship,” Mguta said.