FOREIGNER HOME AND AWAY

Despite 90% of them being born in Kenya, the Shona from Zimbabwe are still waiting to be given IDs recognising them as Kenyans

• Shunned in Kenya and Zimbabwe, the Shona are unable to do business legally or own property.

• They were allowed to register with Huduma Namba as stateless people, but are yet to be given IDs. 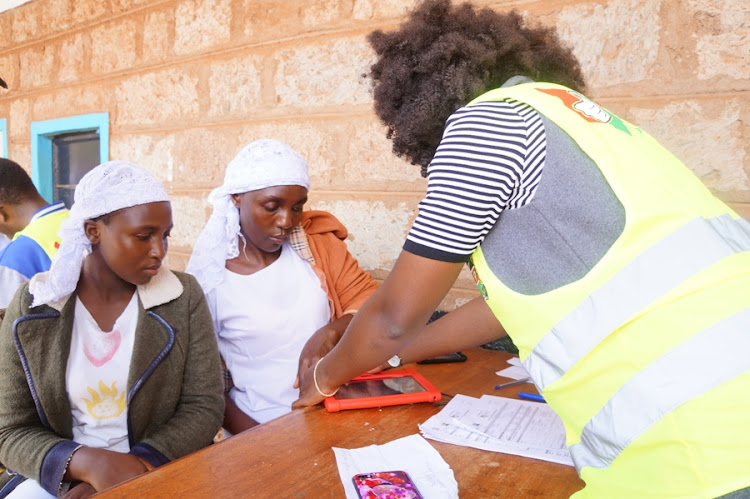 Members of the Shona community get registered with Huduma Namba at Kinoo chief's offices in Kikuyu constituency on April 22
Image: GEORGE MUGO

Over 60 years ago, a community arrived in Nairobi from Zimbabwe and started preaching the gospel of God. Little did they know their mission would leave them stuck in the country and stateless.

Life changed all of a sudden for the less than 100 missionaries from the Shona community, who had arrived in the country two years before Kenya gained Independence (1961).

Things came to a head when Kenya's British colonialists left. The Great Britain passports the Shona had used to come to the country could not be used again after Independence.

The Kenyan government could not clear the Shona to go back since it could not recognise how they entered. This left them trying to seeking citizenship instead.

Since Zimbabwe and Kenya were colonised by Britain, the Shona had accessed the country easily. No one was questioned much if they had the United Kingdom of Great Britain and Northern Ireland passport.

They arrived and started Gospel of God Church in Nairobi before spreading other branches to Kinoo in Kiambu county.

“We travelled to different countries under the British colony with ease since we would be given passports once we applied for them,” Peter Maholone said.

Another worshipper, Maria Budi, says what has troubled them since 1963 is that the Kenyan government has declined to issue them with identity cards.

Virginia Moyo, a Shona member living in Kinoo trading centre in Kikuyu constituency,  says these days, things are even more difficult since their children are not going to school compared to some years ago.

She says when the government started demanding birth certificates for children who are joining nursery schools, they stopped taking them since no one has such documents.

In the past, she says, even without a birth certificate, children would learn nursery school education, primary and secondary school with ease.

Moyo, who was born in the country by her Shona parents, says her daughter sat the KCSE exam at Kanjeru Secondary School, but the school declined to issue her with the results.

“We have suffered a lot due to lack of IDs. We are worried since issues are getting tighter since we are resorting to educating our children at home just to know how to read, write and do calculations so they can be informed,” she said.

The Shona community from Zimbabwe migrated to the country in the 1960s.
News
2 years ago

The Shona community is spread across Kinoo, Muguga, Gitaru and Githurai wards in Kiambu county, as well as scattered in parts of Nairobi. Their population has grown to approximately 4,500 stateless people.

They end up doing businesses that do not require an ID to start. However, they say registering some businesses is a problem since they do not have Kenya Revenue Authority PIN numbers.

They also suffer when one of them dies. They struggle to get space at public cemeteries to lay them to rest since IDs are asked for to enable a chief or an assistant chief to issue a burial permit.

Community member James Koba summed up their limited options. “We do businesses such as knitting clothes, pullovers, mats, kiondos (shopping bags), carpentry and mechanics,” he said.

“Some of these do not require an ID to start. When we see the government or county government wants to question how we pay rates, we close them and remain idlers.”

NO PLACE TO CALL HOME

4,500: Current level of their population

90%: Were born in the country but have no IDs

1932: Year their Gospel of God Church was founded by Baba Johane

“We have schooled together, they have learnt our language, we have intermarried and they are our neighbours. We do not see why the government should continue hosting them without identity cards.”

Due to interaction with the Kikuyu community, some Shonas have intermarried, and they use their spouses' IDs and PIN numbers to start and register businesses.

“Those of us who schooled in the 1980s and 90s, we interacted with locals and even learnt Kikuyu dialect in lower primary. We know Kikuyu just like we speak English, Kiswahili and we never dropped Shona. We are also fluent in it,” Koba said.

“There are some of us who are married to Kikuyus. Their wives have helped them start businesses, register them, pay for licences and much more, and they have excelled.”

On the flip side, some local women have exploited their vulnerability, Koba said. They waited for them to excel then divorced them, ending up with plots, cars and businesses since they are all registered under their names.

“It is very tricky to marry locals at times. There are Shona men who have been divorced by their wives and you know very well you do not have an ID, you cannot lodge a complaint to the police or even at the court of law. You are just left like that,” he said.

"But there are those who are strong. No matter how rich they become, their relationships are strong."

'Mugabe and I': A personal history of growing up in Zimbabwe

As Zimbabweans usher in a new era, author Petina Gappah considers the long shadow ex-president Robert Mugabe has cast over her life.Through the ...
News
3 years ago

A footballer, James Kiziwacho, says he used to play at Kinoo United FC, and he used to be the best midfielder.

He said Kenyan Premier League teams poach players from local teams, and he used to be invited due to his prowess, but he could not be enrolled due to lack of an ID.

Kiziwacho resorted to cycling races, where he practised for a race in Ngong and emerged number one in a 50km race, but the organisers of the competition failed to award him Sh100,000 when they asked for an ID.

“I have been frustrated. I was born by my parents who I live with in Kinoo. I'm confused since I cannot start a business, and from the analysis of issues, I find myself being confined to being a cobbler. I repair shoes and I can see myself with all the talents I have remaining a cobbler,” he said.

Area MCA Samuel Kimani said many are the times when he has pleaded with police to release the Shona, whenever they are arrested.

He said whenever police are looking for suspects, at times they harass people. The Shona find themselves victimised when they are asked to produce IDs, as when they fail to, they are arrested.

The MCA said he will speak with the assistant county commissioner, whose office instructed the Kinoo chief to issue the Shona with letters that identify them as stateless people.

“We appreciate that these people live with us. They do not have IDs but we know them. We agreed that it is our duty to protect them at all costs so that they enjoy their lives just like any other person,” the MCA said.

"For those reasons, we do not see why the government should continue hosting them without identity cards. They need to be given."

On behalf of the Shona community, Budi said since more than 90 per cent of them have never gone to Zimbabwe, the government should register them as citizens.

She said their origin country cannot register them since immigration laws have changed, and they cannot also be allowed back. Some do not even know where they could go to start making a living.

“Failure to register us, the country will keep dragging us into poverty. Being unrecognised, most of us will lose opportunities, and we know this country is where we belong,” Budi said.

“If the government registers us, we can expand our businesses, bring them to the light to participate in issues affecting it, pay taxes and support the country where we can economically.”