FROM GRACE TO GRASS

Kenya's Mike Sonko: The rise and fall of Nairobi's ex-governor

The former governor is known for his flamboyant dressing style.

• Known for his glitzy lifestyle, flashy clothes and expensive jewellery, Gidion Mbuvi Kioko earned the nickname Sonko - Swahili slang for a rich person - after publicly distributing cash to his supporters in Nairobi's slums.

• At the age of 35 he became an MP in 2010, rising to senator three years later before Mr Sonko was finally voted in as Nairobi's governor in 2017. 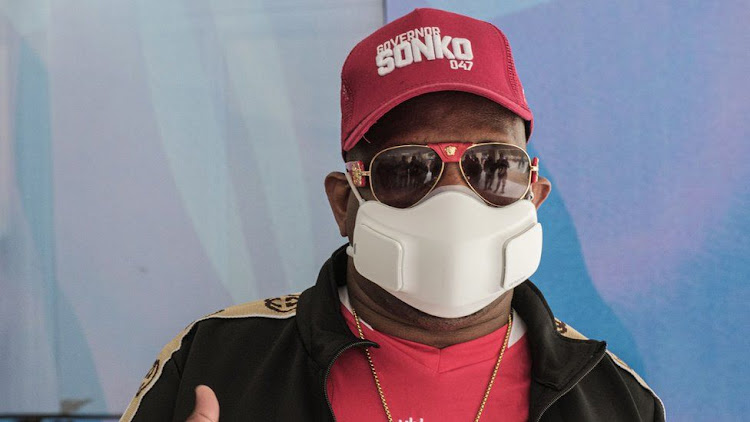 In a dramatic fall from grace, the colourful former governor of Kenya's capital, Nairobi, is now facing numerous criminal charges including money-laundering and terrorism. So who is Mike Sonko and how did he rise to become one of Kenya's most high-profile politicians?

Known for his glitzy lifestyle, flashy clothes and expensive jewellery, Gidion Mbuvi Kioko earned the nickname Sonko - Swahili slang for a rich person - after publicly distributing cash to his supporters in Nairobi's slums.

Long before he entered politics and earned his nickname, he was imprisoned in the 1990s over a land fraud case. He managed to escape from jail by bribing his guards, before he was caught and sent back to prison.

After being freed, he set up successful businesses including a vibrant matatu (minibus taxi) firm, a real estate company and a night club in Nairobi, and he now had the money and guts to enter politics.

At the age of 35 he became an MP in 2010, rising to senator three years later before Mr Sonko was finally voted in as Nairobi's governor in 2017.

It was a spectacular rise and there were high hopes that he would lead a transformation of the capital as he had promised, despite a modest educational background, having only studied up to secondary level.

He was a maverick who seemed to have defied the odds, and to understand the city's many problems.

And for those who doubted his abilities, he had a former oil company chief executive as deputy governor to help him implement his big plans for the city.

But just as his rise was epic, his downfall was equally remarkable. He was impeached in December for gross misconduct and abuse of office.

Mr Sonko also faces numerous charges in the courts, including several corruption cases, assault and terrorism-linked offences. He denies them all.

He is alleged to have embezzled more than 300 million shillings ($2.7m; £1.9m) partly through the irregular awarding of contracts to friends' companies that are said to have wired money to his personal accounts after receiving their payments from Nairobi county.

He was also recently accused of recruiting and arming a militia, procuring military clothing associated with terrorist groups and financing terrorism activities.

An image of him and his private security in full military uniform at a public forum, which he is said to have posted on his social media pages, is part of the case against him. 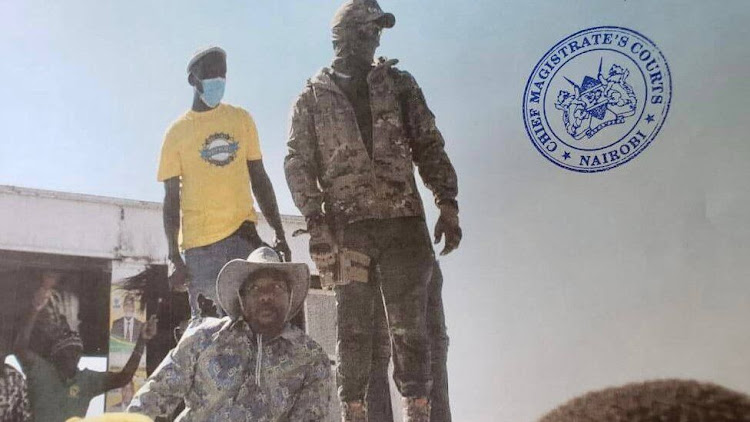 This photo (with Mr Sonko in the foreground) was filed in court by the security authorities
Image: DCI/COURT DOCUMENTS

There is no indication when Mr Sonko will actually go on trial - he faces numerous charges, some of which date back to 2019.

He and his supporters say the charges are politically driven and meant to intimidate him.

His relationship with the ruling administration is a far cry from the person who had successfully asked President Uhuru Kenyatta to do his bidding, a few years earlier.

'The president's on loudspeaker'

In 2014, as national authorities sent bulldozers to demolish residential houses allegedly built on public land in Nairobi, Mr Sonko, then the senator for the city, rushed to the scene. 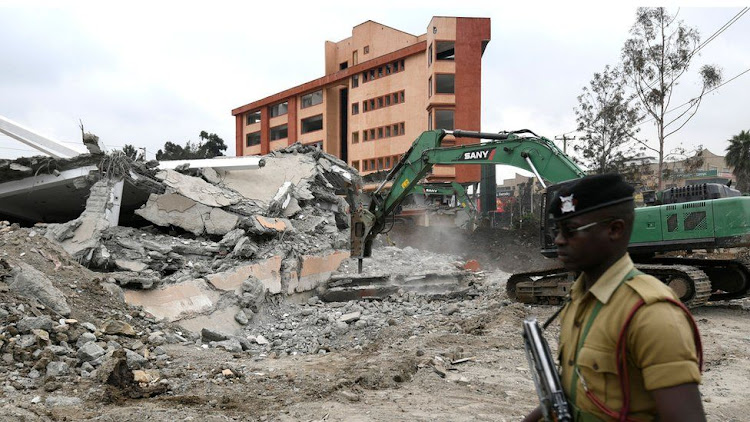 Structures illegally built on public or riverside land, such as this one, have been demolished in the past
Image: BBC

Part of the crowd was watching in desperation, seeing their investments razed to the ground.

The senator made a call to President Uhuru Kenyatta, and put him on loudspeaker: "Your Excellency, sir," the senator said, "here in Balozi [an estate in Nairobi], houses worth billions of shillings are being destroyed."

"Who is demolishing them?" the president asked.

"It's the minister for agriculture... I had written a letter to his office and he assured me that he would not do it. He's here and now the houses are being pulled down," Mr Sonko replied.

The president said he would stop the demolitions. The crowd shouted in excitement.

Moments later the minister confirmed that he had been directed to stop the demolitions, until the dispute over the land had been resolved.

"The president is my friend. I put him on speaker call because I have confidence in him - he is the most accessible president in the world," Mr Sonko said at the time.

For all his influence and access to power, Mr Sonko had by then been in politics for less than five years.

'I was a criminal and former prisoner'

Mr Sonko started his political journey in 2010, when he contested a parliamentary by-election.

He was a virtually unknown entity in politics, but he was rich and flamboyant - he splurged his money and endeared himself to the masses. He won easily. 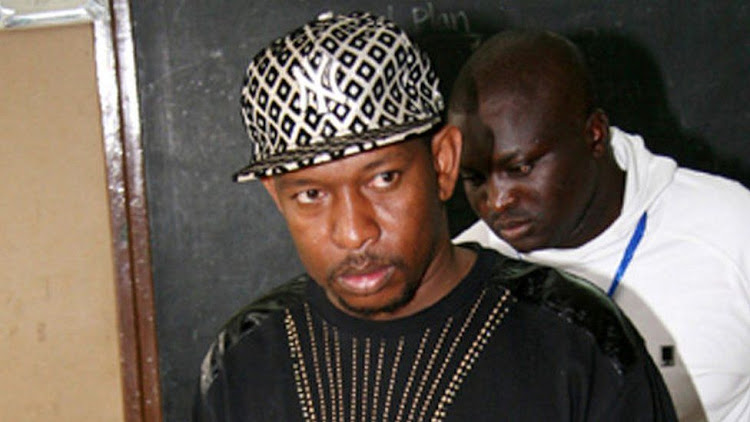 Mr Sonko became an MP when he was just 35
Image: BBC

Mr Sonko's unconventional behaviour has often been criticised, including his brash and casual style, and love for bling.

In 2011, as a new MP, he was thrown out of parliament for wearing ear studs and sunglasses. "I represent the youths who elected me to parliament," he told the BBC. He said he would fight to change the dress regulations, although he never succeeded.

As a legislator, he took part in various demonstrations, which saw him roll on the road and punch a wall. He used his privately funded NGO to provide free services while he was senator, facing criticism for seeking to undermine the then governor.

He at times recorded private conversations and posted them on social media, earning himself the epithet "recording artiste".

Even as governor, his antics carried on. As the coronavirus pandemic arrived in Kenya, he was criticised for including small bottles of Hennessy cognac in food parcels handed out to vulnerable Nairobi residents.

"It has been believed that alcohol plays a major role in killing the coronavirus," he said. The World Health Organization cautions that drinking alcohol can weaken the immune system.

Note: WHO warns that drinking alcohol does not protect you against COVID-19 and can be dangerous pic.twitter.com/vuSuVAb8dy

As well as his idiosyncrasies, Mr Sonko's past criminal record has also often surfaced in public discussions about his integrity, especially in light of his popularity and remarkable rise in politics.

In 2012, Kenya's Committee on Administrative Justice - an office which investigates complaints against public entities and officials - listed Mr Sonko among politicians determined to be "unfit to be cleared for elections for factual integrity issues".

"My critics refer to me as a criminal… yes I'm a former prisoner, I was a former criminal, but today I'm the governor of this great city," he said in 2019.

'He failed to run a city'

When Mr Sonko was sworn in on 21 August 2017, he promised that the city would never be the same again.

"I shall work around the clock to guarantee efficient and timely services for all our residents," he said. 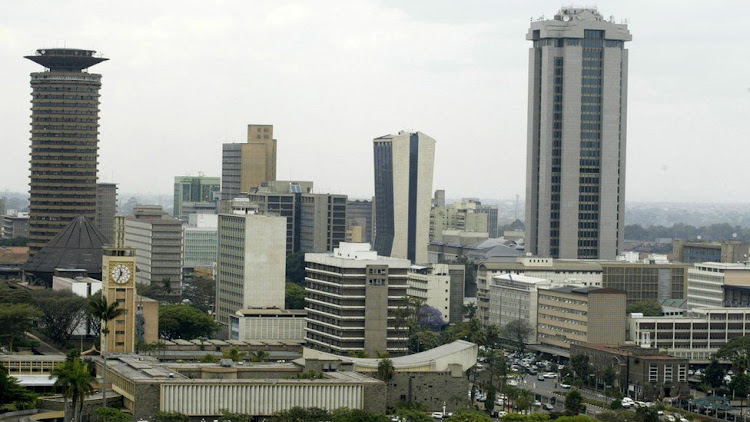 The governor promised to clean up Nairobi
Image: BBC

Yet his brusque manner and unorthodox managerial approach led to a string of resignations, sackings and constant fallouts with city officials.

The promise that the governor would transform the county was not to be.

"Sonko didn't know how to manage the formal structures of government, and he is leaving the scene in the same manner and drama that he came in with," senator Isaac Mwaura later said.

Eventually, the governor signed away some of the county's functions to the national government under the Nairobi Metropolitan Services (NMS) headed by a general.

At the time of signing the deal, a court order barred him from accessing the office. He also faced a threat of impeachment.

'It was all hype'

Although Mr Sonko initially declared he had voluntarily handed over some of his powers, he regularly fought to reclaim them, at one point alleging that he had been duped. 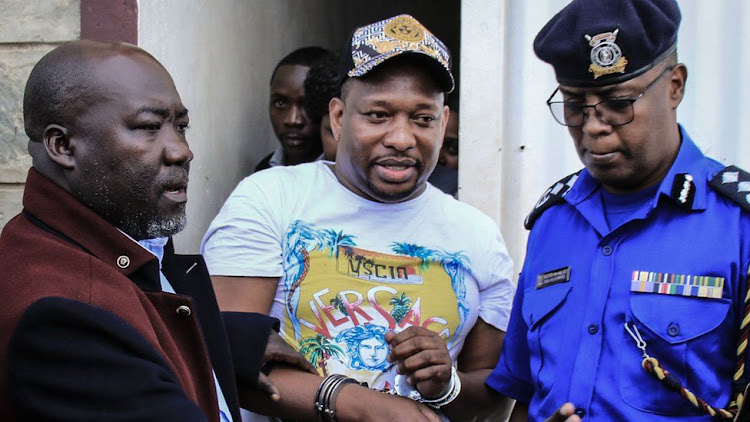 In the end, Mr Sonko said he regretted having joined politics
Image: BBC

President Kenyatta said the governor had failed to govern the city, and had offered the NMS to help him.

"I told my friend Sonko, if you need help I will try to get someone in, but he concentrated on putting on goggles and bragging about the work he said he was doing," the president said recently.

The president says he initiated Mr Sonko's removal over his non-performance and acrimonious leadership style.

It was a disappointing end for those who desired real change and believed that Mr Sonko's administration would deliver it.

He had promised better services - and while he cited some accomplishments, including reclaiming grabbed public land and rebuilding roads, to many it seemed ultimately to have been all hype.

His quick-fix nature and handouts that initially endeared him to some meant little accountability for the promises that he had made to the public who had elected him.

Now freed from the responsibility of public office, he has lots of time to prepare for the many legal challenges that lie ahead.