PRISONER IN OWN HOME

How smoking cost a man both his legs

As a teenager, Ndamberi would watch people inhale and exhale smoke and think it looked cool. But now he curses the day he started smoking tobacco

• Tobacco use kills 30,000 Kenyans annually, while thousands more are sickened by it 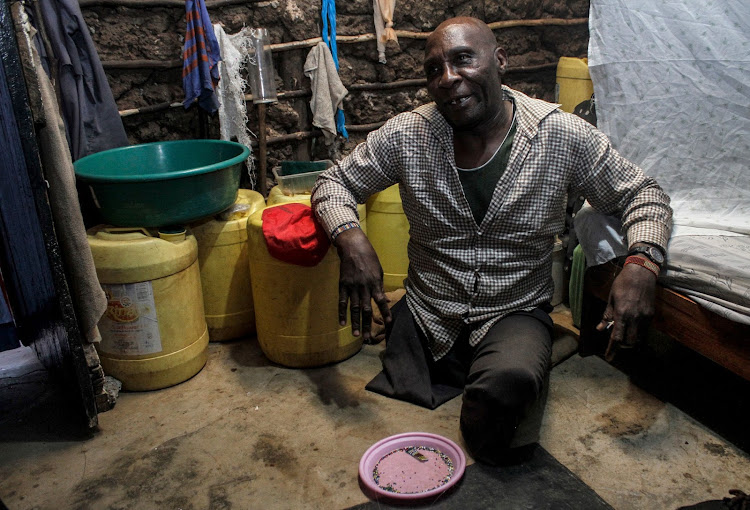 Silas Ndamberi, 62, does beadwork in his rented house in Kibra on June 4. Decades of smoking led to him developing Buerger's disease in his lower limbs
Image: ENOS TECHE

A foul smell assaults your senses as you enter Silanga slum in Kibra, Nairobi. Raw, smelly sewer runs freely along the narrow terraces. It’s also noisy. The hundreds of tiny mabati houses that make up the neighbourhood are linked by narrow, twisting alleys.

We take 30 minutes through twists and turns, hops and jumps to reach Silas Ndamberi, 62, a resident confined to a mud shack since 2016. The single room is his kitchen, bedroom and sometimes toilet.

We find him busy crafting some beadwork. He will then drag himself to his doorstep to sell them to earn a living. This has been his life since his two legs were amputated four years ago.

Navigating the back alleys of the slum on a wheelchair is impossible, forcing Ndamberi and other disabled people of Kibra to become lifetime prisoners in their own shanties.

He used to wake up with a cigarette on the left corner of his mouth every morning for 20 years.

“One morning in 2015, I lit up a cigarette as I headed towards the carpentry shop where I was employed, but suddenly I felt a sharp, excruciating pain on the big and small toes of my left leg,” he says.

“I passed by a health centre that was along the way. I was examined and given painkillers but the pain kept tormenting me. I had to terminate my journey to work and retire home for a bed rest.”

Three days later, Ndamberi could barely move his leg, which was now numb, forcing him to seek help at Kenyatta National Hospital.

“After numerous tests, the medics confirmed to me my worst fear: I was going to lose one of my limbs. This, they said, was a result of a blocked blood vessel and damaged tissues brought about by smoking tobacco,” he says. 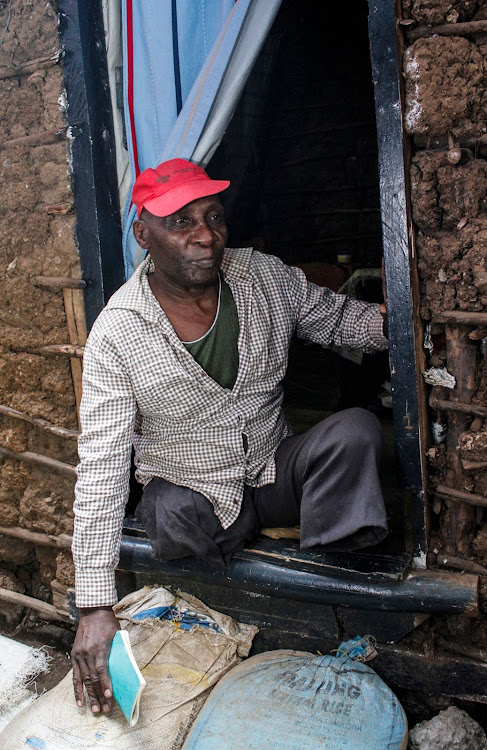 Ndamberi at his doorstep in Kibra
Image: ENOS TECHE

His medical records showed he was diagonised with Buerger's disease, which the World Health Organisation says is almost exclusively linked to tobacco use.

Researchers believe chemicals in tobacco may inflame the lining of the blood vessels and cause narrowing, blood clots and blockage.

The disease has no cure. The US Centre for Disease Control says the only way to keep Buerger’s disease from getting worse is to stop using all tobacco products.

“Surgery may help restore blood flow to some areas. It may be necessary to amputate the hand or foot if infection or widespread tissue death occurs,” the CDC says.

Doctors at KNH said urgent surgery was to be done to amputate one of Ndamberi’s lower limbs.

“I felt hopeless and impotent as I cursed the day I started smoking tobacco,” Ndamberi says.

He spent four months bedridden at the KNH in 2015.

“Leaving the hospital, I couldn’t imagine my life without a leg. Here I am, unemployed with a young family depending on me. I felt darkness in my life,” he says, fighting back tears.

After numerous tests, the medics confirmed to me my worst fear: I was going to lose one of my limbs. This, they said, was a result of a blocked blood vessel and damaged tissues brought about by smoking tobacco

His condition worsened towards the end of the year 2015, when a pain similar to the one that cost him his left leg occurred in his right.

“The more pain I felt, the more worried and panicked I became at the thought of losing my right leg.”

He spent another four months in hospital and lost his right leg also.

After spending eight months in and out of hospital, he followed the advice of doctors and decided to quit smoking in March 2016 upon his discharge from the facility.

“It was not an easy decision to make, but the thought of my hands being amputated, too, sent shockwaves through my nerves.”

STARTED AS A TEENAGER

The father of two started smoking in 1966 as teenager.

“I would observe people light cigarettes, inhale and exhale the smoke that would later disappear in the air. It felt cool and so I thought it made them look complete and more human,” he says.

This triggered his appetite for tobacco. “I started rolling tobacco leaves to smoke with my friends. At first we could hide, but then we grew confidence as time passed by.”

Soon, he was hooked. “I would wake up with a cigarette every morning. It became an hourly habit taken at intervals, and before I knew it, I was smoking about a pack a day.”

He was dumped by his wife of 10 years upon his readmission at KNH in 2015.

“My wife left with our two children and up to now, I have no information on her whereabouts. I am left to fend for myself and I had to adapt to the new normal of living life as a disabled man.”

Ndamberi is calling upon the government to inflict tougher regulations on tobacco and nicotine products.

CS says licencing of the pouches done contrary to the provisions of the law.
News
2 years ago

Leaving the hospital, I couldn’t imagine my life without a leg. Here I am, unemployed with a young family depending on me. I felt darkness in my life

The East African Medical Journal published an article in April 2007 about the leading cause of amputation at referral hospitals. The article found smoking to be the main indication for lower limb amputations at the Kenyatta National Hospital.

It looked at 77 lower limb amputation (LLA) cases performed on 74 patients with age range from seven months to 96 years old. Peripheral vascular diseases, as far as smoking tobacco is concerned, contributed to a high number of LLAs.

According to the Ministry of Health, eight per cent of Kenyans are still abusing tobacco products. Experts warn this is not good because tobacco use leads to most non-communicable diseases, including cardiovascular complications, cancer and death. 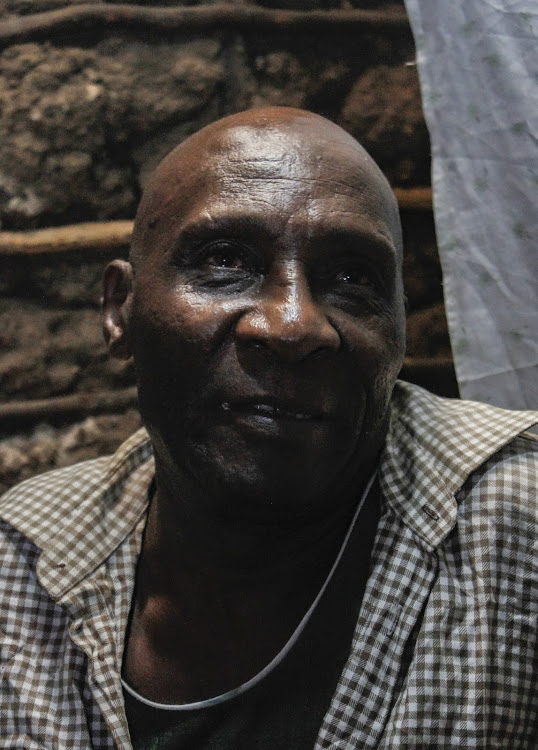 Ndamberi depends on well-wishers to pay his monthly Sh2,000 rent as well as provide him with food.

A wheelchair that was donated to him by the hospital remains crumpled at the corner of the room, as it is practically impossible to use it in the slums.

“I feel isolated here as their is no proper facility for persons with disability to use. When I feel the need to use the toilet I crawl myself to the tenant facility on the far end of the plot,” he says.

He is clear on the dangers of smoking and wish to become an anti-smoking ambassador.

“When I see someone smoking around me, I always ask them to look at me as a reminder of what might befall them. I once was able to walk but now I cannot.”

He dismisses ‘harm reduction’ alternatives, saying this is what cost him the second leg.

Tobacco harm reduction: Why not eliminate?

Products are sold under the guise of being less harmful, but that's misleading
News
2 years ago

When I see someone smoking around me, I always ask them to look at me as a reminder of what might befall them. I once was able to walk but now I cannot

“Just like other drugs being abused, tobacco also contain nicotine that is addictive,” he told the Star.

“Specific homes need to be built to help in the smoking cessation. Currently, Kenya has no proper procedure to accommodate a population that wants to quit smoking.”

Lesan says an independent board should be formed to work towards implementing tobacco control policies.

Tobacco use kills at least 30,000 people in Kenya annually, while thousands more are sickened by it, according to the Tobacco Atlas.

“Such numbers are still high and can be compressed further. We need an autonomous board that will have regulation to reinforce and implement policies that are already available,” he said.

Many affected families are poor, so a Sh90,000 bill is out of reach
News
3 years ago

“I feel like the government has neglected its key mandate of protecting its citizens by declaring tobacco an essential product during this time of coronavirus pandemic,” he says.

“This is against our goal of ensuring a decline in demand and supply from the use of tobacco in the country.”

Ketca is the umbrella group of all civil societies in Kenya fighting against tobacco use.

Gitali calls upon the government to increase taxation to ensure cigarettes are not sold in single sticks but rather in packs.

He says this will discourage the younger population, who will not be able to afford the luxury of purchasing a cigarette.

“Our interest as an alliance is focused on reduced consumption and reduced supply. We want measures that will make tobacco to be less available in the market, thus making few people to become attracted to it.”

Legislation compelling cigarette manufactures to use large warnings and gory images in cigarette packets have played a role in the reduced use of tobacco in the country.

But Ndamberi says this is not enough because there are still about two million smokers, and new, dangerous nicotine products are flooding the market.

He wants the government to impose even together measures to protect people’s lives.

“I want Kenyans to remember I began with a single cigarette stick, and this is where it got me,” the amputee says.