Helping humans live in harmony with habitat and wildlife

• His efforts have made them renowned centres of economic value, won him awards 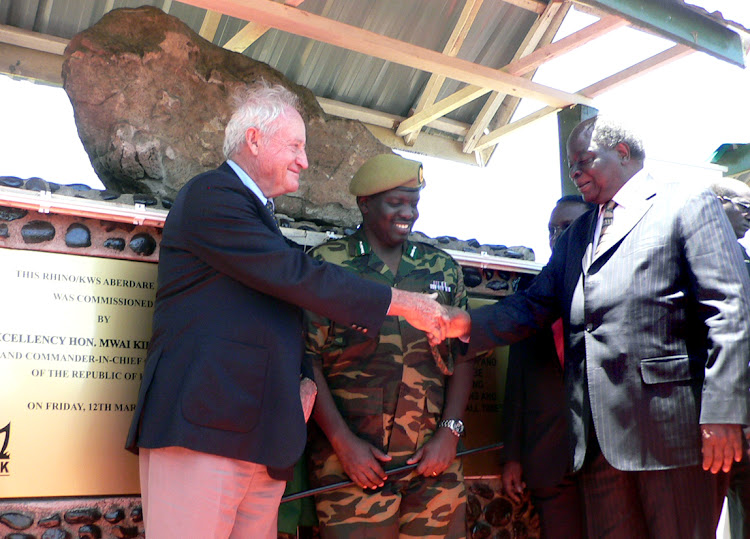 He has championed the conservation message at all levels of society in Kenya and internationally. His most important contribution has been the about-turn in thinking that is making Kenya’s mountain forests renowned centres of economic value, and where humans can live in harmony with habitat and wildlife.

One of Kenya’s pioneering conservationists, Church was awarded an OBE (Officer of the Order of the British Empire) in the Queen's birthday honours, 2017, for "Services to conservation, the environment and the community in Kenya."

The award ceremony was presided over by the then British High Commissioner to Kenya, Nic Hailey.

The Star spoke to him about his achievements, his book 'Mel-el-Lek’s Mountain' and his take on the challenges the country is facing in its goals for conservation.

THE STAR: You are best known for your tenure at the helm of the Rhino Ark and the Rhino Charge fundraising challenge, which raises funds for Rhino Ark. Tell us about the origins of both these.

COLIN CHURCH: Rhino Ark was formed out of a moment of crisis, when one of Kenya’s most precious assets, the Aberdare Mountain range, was facing an onslaught of avaricious encroachment and destruction.

Ideas are for everyone, but to make something like Rhino Ark happen always takes flair, buckets of hard work, determination, enthusiasm, lots of luck and something that sparks the imagination of many, who then take up the challenge in whatever way.

Rhino Ark’s determination to respond to the crisis gave ordinary folk the chance to roll up their sleeves.

You have now written a book which includes your experiences at the helm of Rhino Ark. Its title  ‘Mel-el-Lek’s Mountain’ uses the name of a Ndorobo hunter-gatherer, to a large extent the narrator. Why this unusual approach??

Aberdares is a mountain range treasure trove of supreme environmental and commercial value to Kenya. It is a primary water catchment upon which at least one in three Kenyans depend. Equally, it is a biodiversity hotspot with a global outreach.

My book is about a selection of compelling true events and the people behind them in which the Aberdares has been at the heart, historically and currently. Mel-el-Lek is the observer of the events. In ancient Maa language, Mel-el-lek means “it is not easy”. 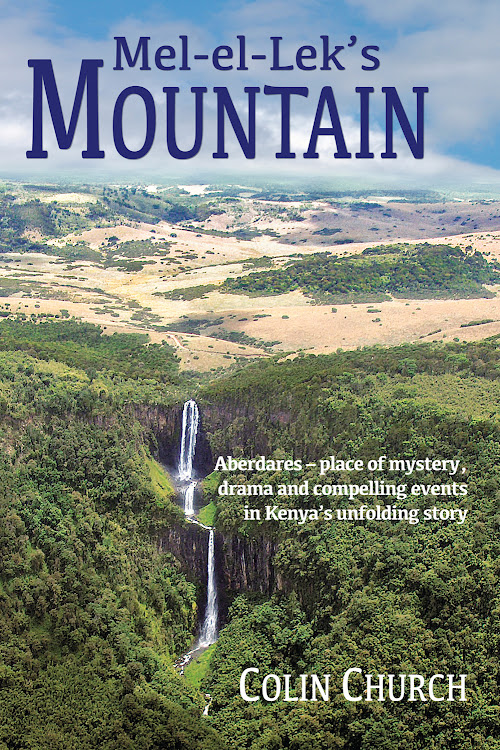 Your efforts over three decades to see the Aberdares Fence built suggest you consider the Aberdares forest ecosystem to be of great importance to Kenya. Why?

Not only the Aberdares; indeed, all the nation’s indigenous high altitude forests that create the convection to bring rain and form the source of hundreds of rivers and streams must be protected. There seems to be a political blind spot, or perhaps a wish to remain in denial, that these state-protected areas are thought easy pickings for exploitation by some at the expense of all Kenyans.

It is astonishing that Kenya’s indigenous forest zones are still considered for commercial tree extraction to keep the Kenya Forest Service, the body charged with their very protection, in revenue — even within the latest amendment to the Forest Conservation and Management Act 2016.

As prime water catchment for 47 million Kenyans, a supreme effort is needed to replant with indigenous trees, those areas wrongly planted with exotic softwoods inside indigenous zones. Monoculture exotic plantations accelerate rather than conserve water catchments.

There remain some areas inside the Rhino Ark fence — one of over 3,000 hectares from Kieni to near Njabini (and there are others) — in which the ‘shamba system’, where farmers grow crops between exotic trees, is continuing, despite government announcements that such practices would be phased out.

This system was given a cosmetically confusing name (Pelis: Plant Establishment and Livelihood Improvement Schemes) in the Kenya Forest Act of 2005, now 15 years ago. Apart from such being a false statement, the question has to be asked: who is trying to fool who?

If KFS' core revenue came from plantations outside indigenous forest and by funded extension services to farmers in a nationwide woodlots expansion drive, things would look different.

There remain huge areas (some in existence for over 50 years) where no managed exotic harvesting has been done, and which should be urgently cleared of exotics. The Rhino Ark fence should extend from its current line to encompass some significant areas currently outside the fence to become a greater part of the indigenous zones.

Some areas were left out, as political pressure was so great at the time that short-term compromises for certain random sections was thought the only way to urgently complete the 400km around the entire mountain system. But now 11 years after fence completion, such an action is long overdue.

There still remains a tea estate within the indigenous forest boundary. Why should farmers nearby the fence have a privilege to grow crops, run cattle in poor health and indulge in deadwood off-take inside the fence, when the water-catchment forests belong to all Kenyans?

The benefit to forest-edge farmers is that they now secure 100 per cent crop off-take, no more wildlife destruction and are the first benefactors from rainfall and forest stability. Farm values have escalated and their land is safe. Those are their very real benefits.  Some forest communities want their cake and eat it.

Building an electric fence across a distance of 400km is no mean feat. Were you ever tempted to give up?

No, as every kilometre of fence built was so welcomed by the forest-edge farmers that it spurred all on to build faster.

Turning to conservation, it is the rhino which has suffered from the greatest collapse in population in the East African region. Would you say the rhino still has a future in the wild, or will rhinos eventually be found only in zoos?

Kenya has been successful, despite the global illegal cartels, in its protection efforts on state and private lands. Mel-el-Lek’s mountain highlights the massive value of the Aberdares as a natural zone for black rhino within the 2,000 sq km fence environment.

It stresses that the fence-adjacent farmers would be part of the protection shield if the concept of the Aberdares Trust, placing fence-edge farmer representation on an overall management board, was begun. Rhino Ark was so named to catch public attention and for it to become perhaps Kenya’s greatest Black Rhino stronghold.

What about the Bongo, “the elusive and majestic mountain bongo”, as you call it in your book?

Kenya’s high mountain forests are the only areas in the world where the Eastern mountain bongo (tregalaphus eurycerus isaaci) exist. They remain on the edge of extinction.

Last year, the Minister for Tourism and Wildlife Najib Balala launched the National Recovery and Management Plan for Bongo. The policy is designed to reintroduce bongo from both Kenya and overseas sources in an inspiring ‘back-to-the-forests’ move to where they belong.

'Mel-el-Lek’s Mountain' devotes a whole section on the history of bongo, the causes of its decline and what can be done to bring them back from an abyss.  Strong management of the process is essential.

Leaving aside the wildlife found in the Aberdares and Mt Kenya National Parks and focusing only on the “water tower” function of these mountains, would you say they are secure for now, or are they still under threat?

Electric fences along hard borders (farmland/state forest or national park land) is one solution. But modern technology is constantly breaking new ground. Already, many deterrents are being used: chilli fences, bees, geo-fences, drones and helicopters are all methods that are developing.

The duty of governments and conservation bodies is to improve the living standards and ways to generate income from on-farm improvements. Then entry into forest to steal or poach is reduced. Security management and High Court fines are key elements in the mix.

Again if Kenya’s forest legislation was reviewed by Parliament to change KFS’s core activity to focus on farm forestry and close out indigenous forest as the prime income source, it would lead to lasting change.

There is now talk of a highway being built through the Aberdares National Park. Any comments on this?

There has been supreme pressure for two roads, one of which would have dissected the high moorland inside the National Park up to altitudes of over 3,000 metres — an environmental slap in the face to the conservation of the Aberdares. I believe this has been dropped again as it was in 2009, after it was first touted in 2005.

The Kenya National Highway Authority has announced work has begun on another road that runs outside the Eastern boundary of the forest and the fence from near Nyeri South to the Kamakia river ridge direct to Njabini, slicing through 21km of precious forest and water catchment.

It is a convenience road with no economic justification. There has been no statutory public debate about this route.

There is already a long-existing tarmac road a few kilometres further south at Gakoe to Kieni, which would suit the purpose of linking Kiambu county with Nyandarua for the movement of farm produce.

The existing policy of improving farm roads up to the edge of state protection boundaries so that produce is moved quickly and efficiently, is the way to go.

Produce grown by farmers on the east and west side of the Aberdares is similar, so national forest dissection is not neccessary. The markets are reached from major existing lower altitude roads that can be enlarged over time to dual carriageway.  Roads at vast expense only for convenience of public transport is in stark conflict with maintaining our water catchments and for the biodiversity value of these areas for what they bring to the national economy.

Kenyans tend to think of environmental conservation projects as “donor-driven”. In terms of percentage, how much of the cost of the fence was paid for through local fundraising, and how from abroad?

The Rhino Ark initiative was started by Kenyans for Kenyans.   Only 30 per cent  came from non Kenyans.

There is unfinished work. What remains is to create an Aberdare Trust to give overall joint management to government, the fence-edge farmers and the public who invested in the Rhino Ark fence, to ensure the fence is well funded into the future, protect water catchment and maintain a huge natural sanctuary for bongo, the black rhino and elephant — all deeply threatened wildlife.

She lived in a mud house and nurtured trees for 20 years, much to locals' bemusement
News
3 years ago
Post a comment
WATCH: The latest videos from the Star
by WYCLIFFE MUGA Commentator on Topical Issues
Big Read
06 July 2020 - 05:00
Read The E-Paper