• Even before the coronavirus hit Kenya, unemployment was a widespread problem 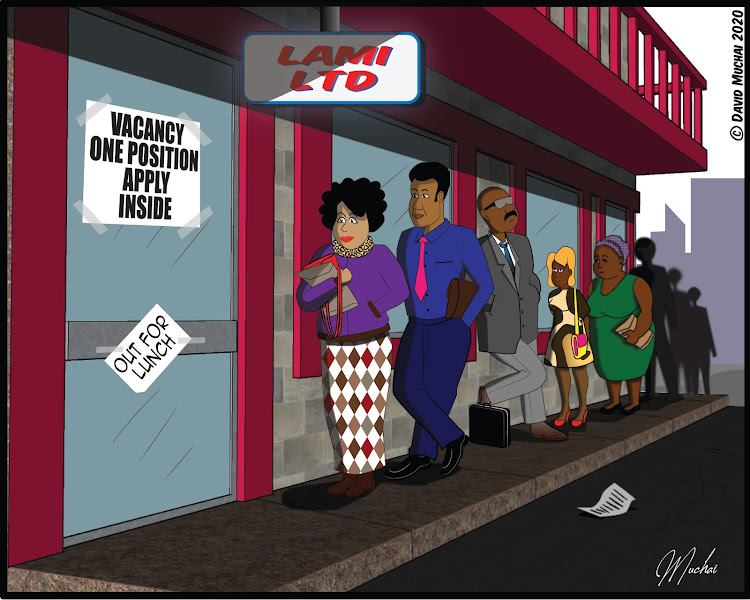 Walking the road in search of work, informally called ‘tarmacking’, is the face of job hunting in Kenya.

Few things capture the hunger for jobs better than the spectacle of 100 youths queuing to apply for one.

A parastatal agency was the scene. January the time. Martha Gesare* (not her real name) the witness.

The former editor, 41, was eyeing a senior communications position. And yet here she was, among recent graduates “looking to get anything”.

Gesare’s career in publications had hit a snag. A stint abroad was cut short for lack of accreditation, work permit and family transfer as promised.

She joined the more than 2.6 million Kenyans job hunting long before the coronavirus hit the country and made life harder for everyone. Gesare and four others recounted their frustrations. Their names have been changed to encourage frankness.

Gesare returned to Kenya in October last year, but she started her search in earnest the following month. Job interviews are like a visit to the dentist.

“Tell me about yourself,” a panellist says.

You have my CV! She wishes they’d ask about the job itself. “What are your salary expectations?”

You have a budget! Asking for too much or too little could hurt her chances.

She is taken through the motions and has twice been highly recommended, only for the job to go to someone who ‘knows people’ or sells himself better than he performs.

But what really annoys her is that she won’t even know she’s missed out.

“You sat me down for two hours to ask me questions. Tell me this thing didn’t go well. Send an email,” she says, urging employers to “style up”.

Social media platforms alert her to opportunities but also to the desperation out there. A WhatsApp group has nearly 300 members and a Telegram group more than 700. Admins offer services like CV writing and coaching for interviews.

Gesare wishes the government would promote innovation to teach people to become self-reliant. Her own lifeline besides her accountant husband is consulting for non-profits.

The assignments are often shared by her ‘real’ friends, some from high school who’ve visited to pray for her. ‘Friends’ who used to call her to push a story went silent.

Though some people may feel “embarrassed for me”, she’s taking it as a breather after two decades working. Her previous job was so stressful she needed therapy, but now she can spend more time with her children, aged five and eight.

She can’t give them as many treats as before, though. She’s also halted her investments and projects. A sacco loan she was servicing is a lingering burden.

“You talk to them, tell them you’re in the deep and need some adjustments,” she says.

Kenyans thought they had seen it all last year. About 30,000 jobs were lost as more than 20 companies across all industries downsized or folded, mostly from July.

And then came Covid-19. Not only a health crisis but fundamentally an economic crisis, to quote President Uhuru Kenyatta.

It has wiped out nearly 350,000 jobs and counting. More than a million are at risk as the formal and informal sectors grapple with little to no returns. 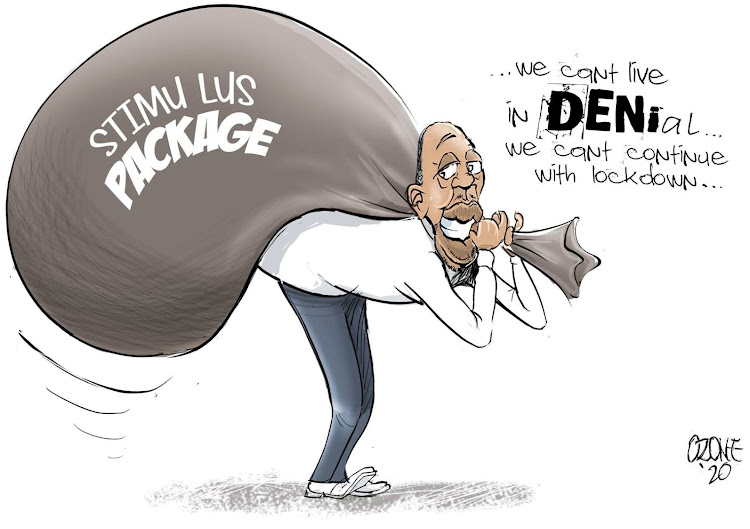 Cost of regaining jobs will be steep

While the government unveiled a Sh53.7 billion economic stimulus plan, it declined employers’ request for a Wage Relief Fund to keep employees. That left untenable Parliament’s belated proposal to bar employers from sacking or slashing their workers’ salaries during the pandemic.

For those who were already tarmacking, the odds just got stacked against them. While Gesare has a husband to lean on, Ekrah Wambui*, 31, is facing a sudden loss of salary as a single mother.

Wambui was in the betting industry until November last year. She worked as a graphic designer at a company that was thriving, only to shut down after a tax dispute with the Kenya Revenue Authority.

Coming to terms with being laid off was her lowest point. “It was stressful at first because I relied on the service pay awarded to us,” says Wambui, who has a three-year-old daughter.

Many applications later, the closest she’s come to a new job is at an advertising agency. The first interview was practical work, and she passed. The second was with the creative director, who barely gave her a chance. “He asked a few questions and then said I wasn’t what they were looking for.”

Wambui lacks a degree but was recognised as the best in her department at her previous work. With “no jobs out there”, she is freelancing to put food on the table.

“I have learnt that nothing is certain,” she says. “You should always be prepared for anything.”

Wafula had taken a three-year loan to purchase a Harrier.
Sasa
2 years ago

BACK TO RURAL HOME

While Wambui was caught off guard, Gibson Kisaga*, 42, quit his job at a regulatory organisation in August 2017. The communications officer had endured mistreatment and overwork, including on weekends, which cost him several relationships.

“You can replace someone within a day but you will not get the same kind of commitment or experience,” he warns employers. 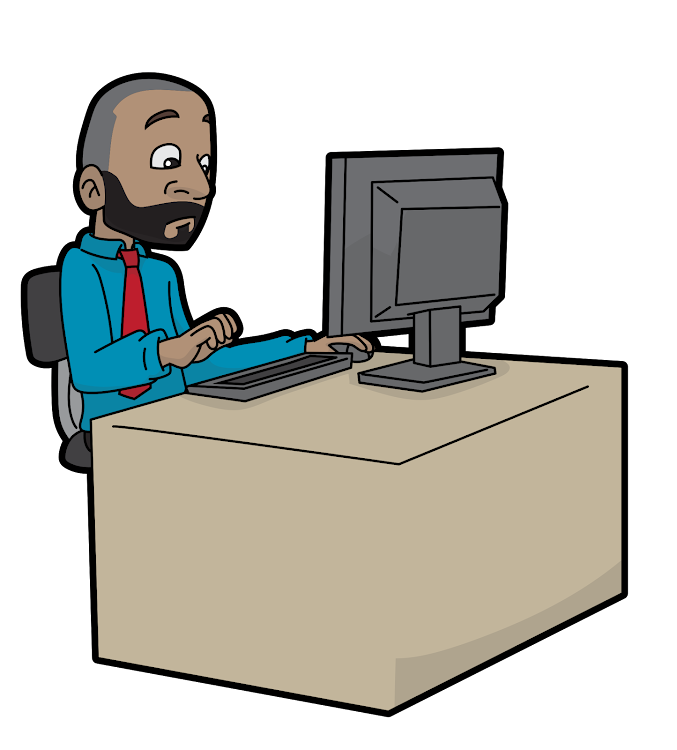 A man works overtime in the office
Image: WIKIMEDIA

Kisaga went into business, buying and selling lessos and kitenge-based dresses and shirts. However, it struggled under his naivety and mistakes, as well as the economy under Uhuru’s government.

“Uhurunomics affected it because customers had lower disposable income,” he says.

“One mistake I made was not separating personal finances from the business. That blinded me to the downturn until too late.”

Thus, by November 2018, he was tarmacking. He has applied for 24 jobs in the past year. Most companies did not respond. He did three interviews but got no feedback.

His worst experience was with a digital loans provider, who seemed out to harvest personal information from job applicants.

Vacancies are few and far between, which makes him caution even those working to start a ‘side hustle’ just in case.

“Also, at my age, I can no longer apply for internships and entry-level positions, such as communications assistant,” he says.

But Kisaga isn’t brooding. He‘s writing socioeconomic articles and supervising construction projects for relatives to make ends meet. And saving slowly from his ‘gigs’, while looking for capital to resume business.

He moved from Nairobi to his rural area at the Coast, where housing and the cost of living are lower. He only spends on basics, such as rent and food.

“It‘s two years since I last bought an item of clothing,” Kisaga says. “I cut spending to the bare minimum and rarely travel.”

Recently married Nadira Habib*, 32, is clocking nearly a decade out of work. “I’ve made more applications than I can count,” she says.

The feature writer, childless, lost her newsroom job in a 2012 retrenchment. She did contractual jobs in 2013, then quit everything in 2014 and went abroad to do a Master’s course in journalism.

She returned to Kenya in June 2018, thinking her added knowledge would be valued by employers. Instead, she was back to “ground zero”, and the widening employment gap became a liability.

Nadira spent a whole year fuming. Then she toughened up. She’s self-confident and won’t cry if an employer rejects her.

At a coastal radio station, for instance, an interviewer looked at her like she was crazy when she told him her past salary. He said they only paid a quarter of it.

“He became very rude. I calmly said, ‘Thank you for your time’ and exited the building,” she says.

Nadira is up against “almost 100 qualified persons for every job opening”. “I keep giving up then I find myself back on LinkedIn, sending my CV en masse.”

She’s freelance writing on social issues to get by. Her husband is employed overseas as a software engineer, but she strives to be independent.

“Not having a full-time job and a dependable monthly income is a heavy cross to bear. It distorts every aspect of your life,” she says.

“I might want to order takeout delivery, for instance. I’d scroll the menu but after counting the cost, I’d close the page and make instant noodles.”

Any social outing is a “luxury”. Taking a loan is an “absolute no!”

She often wonders if she’s destined to live off freelancing. “Maybe not everyone was meant for employment.”

MP blames corruption for no jobs, calls on youth to join fight

Researcher Felista Bosibori*, 39, had worked for a development NGO until March 2015, when the CEO resigned and the new boss went on a firing spree.

“He said, ‘It’s not about incompetence. You are a victim of circumstances,’” she recalls. “And voila, I was jobless.”

Bosibori, single with no children, started applying for jobs daily and even registered with an employment agency.

“There is no vacancy I came across and failed to apply for,” she says. She hoped her ‘papers’ (including a Master’s degree) and experience would open doors but kept hitting a dead end. With finances dwindling, she tried low-cost businesses like making and selling snacks, but they could not sustain her. Then her sister was diagnosed with cancer. Bosibori fasted and prayed, but her sister died.

“Here I was, handling death and joblessness. Most of the time, I was deep in thought or crying,” she says.

The researcher isolated herself. She lost weight, became forgetful and started talking to herself aloud. Headaches hounded her but she could not afford painkillers.

Unable to pay rent, she ended up with three months’ arrears. One morning, she woke up and found four men at the door with paint cans.

“You are not wanted here,” one of them said. She called the landlord but he hung up twice. So there and then, she started to remove her belongings. 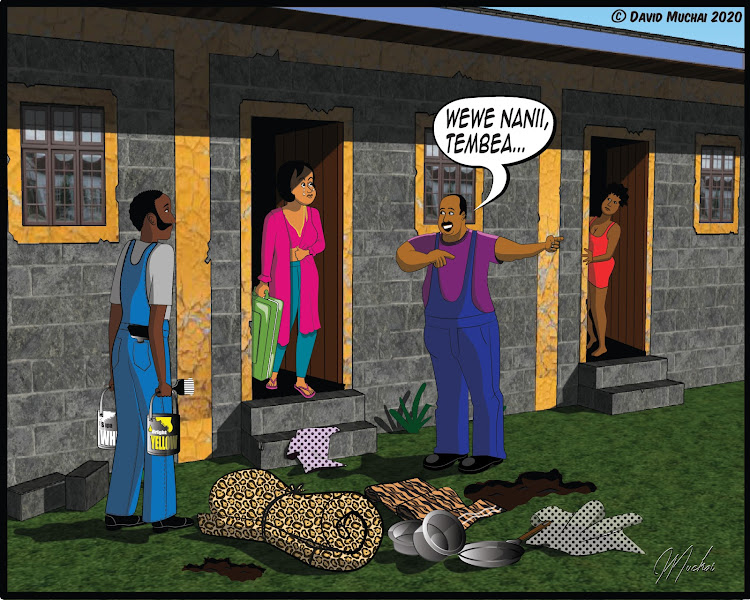 Bosibori went to live with her brother and his family. They understood her plight and treated her well.

While there, she sought medical attention for her headaches. “The doctor told me I was slipping into depression and needed help.”

She had no money for treatment. She texted a former classmate, requesting Sh500 but got Sh5,500 instead. “I thank God for her every day!”

As months turned to years, Bosibori credits such loyal friends and jobless counterparts she befriended in church for keeping her going, when even relatives were snubbing her at family meetings.

A global research organisation headquartered in Columbia expressed the most interest in her. She did written, virtual and face-to-face interviews over three months. But after milking all manner of details from her, they went quiet.

“As in, so promising, only to ghost me without a word!” Bosibori says. “They never even bothered to inform me I hadn’t impressed, after seven good interviews! Mungu awasamehe [God forgive them].”

Despite her hardships, Bosibori urges jobseekers not to despair. “Don’t be too selective,” she says. “That job you despise might be a stepping stone.”

Her own resilience paid off. After four years of tarmacking, eviction, alienation and depression, and that cruel false dawn, she finally had a breakthrough.

She applied for an opportunity with an advocacy group, was interviewed and got the job, all within two weeks. And she went from being broke and cooped up in the house even before the coronavirus pandemic, to flying around the continent on official duty.

That was in February last year. She was entering her brother’s house when her phone connected to the WiFi. She saw an email notification. It was a job offer. She didn’t even read it.

She fell to her knees, praying. She was crying and laughing at the same time. “Thank you, God!” she shouted.