Tourism and hospitality is among the most hit.

•President Uhuru Kenyatta during his Labour Day address warned that over half a million Kenyans could lose their jobs in the next six months. 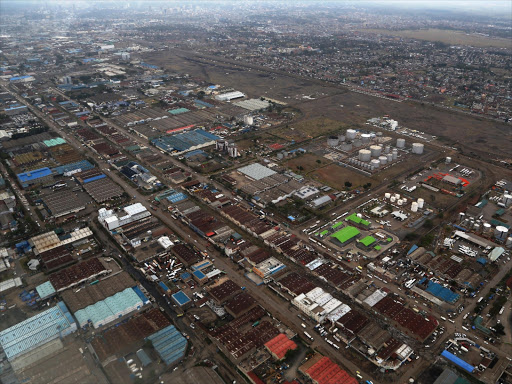 An aerial view of the industrial area in Nairobi.Most industries have scaled down operations with others seeking to lay-off staff over Covid-19 disruption on businesses./FILE

At least 342,300 jobs have been lost in the last two months, preliminary data from different sectors indicate, as Covid-19 continues to ravage the economy.

More than one million other jobs are on the line as players in the formal and informal sector remain in a wait-and-see mode, with companies likely to continue laying off if the coronavirus pushes the economy further South.

According to the Federation of Kenya Employers (FKE) CEO Jacqueline Mugo, companies continue to write to the Labour Ministry indicating their plans to lay-off. These include 20 members of FKE.

“A number have applied for redundancy,” Mugo told the Star in a telephone interview, “A huge number have sent employees on leave as they wait and see. Employers are reviewing all options available.”

Since the first case of Coronavirus was reported in Kenya, on March 12, the economy has taken a beating with most key sectors reporting low or nil business.

President Uhuru Kenyatta during his Labour Day address to the nation from State House , on May 1, warned that over half a million Kenyans could lose their jobs in the next six months due to the Covid-19 pandemic.

Labour Day: Which way for employers and employees in virus times?

What way forward with coronavirus pandemic?
News
2 years ago

133,657 formal jobs had already been lost by April, a report by the Labour Ministry tabled in Parliament last month revealed, majority being from the manufacturing sector. About half a million had been sent on unpaid leave.

The numbers have however increased, an assessment by the Star through interviews with captains of industry and sectoral reports show, with the tourism and hospitality sector being the most hit.

At least 300,000 direct jobs have been lost, sector players say, as hundreds of hotels, eateries, bars and restaurants remain closed across the country.

This is as a result of measures put in place to mitigate the spread of the virus, among them closure of bars and the 7pm–5am daily curfew which commenced on March 27.

According to the Alcohol Beverages Association of Kenya, bars employ over 250,000 people who in most cases earn a daily wage.

These employees, majority who lack permanent contracts, have been rendered jobless.

“Closure of bars disrupts value chains, deepening the negative impact of the pandemic to the economy,”ABAK chairman Gordon Mutugi said.

At least 5,000 bars, entertainment spots, and restaurants have been closed in Nairobi since March with another 4,000 in Mombasa.

Country-wide, more than 20,000 joints were shut, according to the Pubs Entertainment and Restaurant Association of Kenya (Perak).

“We have been very much affected as most of our businesses run at night. Most entities have been forced to send staff home ,” Perak executive officer Eunice Ogea told the Star.

Over 400 high-end facilities in Mombasa, Diani, Kilifi, Malindi, and Lamu were also closed after both domestic and international tourists cancelled their travels over the coronavirus pandemic

“We closed resort from March 31, till tentatively June 15,” Sylvester Mbandi, general manager at The Baobab Diani, told the Star.

Closure of hotels has rendered 12,000 employees jobless across the coast region according to the Kenya Association of Hotel Keepers and Caterers(KAHC).

“ The industry has to be opened,”KAHC executive officer Sam Ikwaye noted.

In manufacturing , approximately 30,000 of the 330,000 formal jobs in the sector have been lost during this Covid-19 period, a recent report by the Kenya Association of Manufacturers(KAM) indicates.

Another 140,000 formal jobs remain vulnerable according to KAM, with about 1.8 million informal jobs dependent on the sector on the line.

At least 10,000 have been lost in the flower industry with about 50,000 employees sent on leave, as the industry struggled to export the perishable commodity.

The security sector had sent home 300 workers as of last month according to data filed by the Labour ministry.

An unknown number of jobs have also been lost in the public transport sector with the Matatu Owners Association (MOA) estimating thousands of both direct, indirect and dependent sub-sectors jobs such as garages, spare part stores among others being affected.

With the government directives on social distancing, workers to operate from home and the recently effected 7 pm to 5 am curfew, the public transport ...
Business
2 years ago

According to chairman Simon Kimutai, the country has over 60,000 matatus and buses operating on a normal day.

The sector is however operating at below 50 per cent capacity, as a result of the social distancing rule , cessation of movement in and out of Nairobi Metropolitan Area and coastal Counties of Kilifi, Kwale and Mombasa and the dusk to dawn curfew.

“Thousands of licensed matatus are out of operation and when a matatu stops moving there are no jobs,” Kimutai said, noting the numbers cannot be quantified as hundreds of thousands , mainly the youth, depend on the industry both directly and indirectly.

Long-distance operators linking major towns of Mombasa, Nairobi, Kisumu to other parts of the country and the region are among the most hit.

“We have suspended all bus operations. Everybody is on leave apart from a few people handling parcels,” said Lennox Shalo, general manager-Mash East Africa.

The aviation industry has also been hit as airlines ceased operations on the ban on international flights.

The nationwide curfew has also affected domestic fights and passenger services on the Standard Gauge Railway.

Most affected sectors according to the CS includes trade, tourism, transport and storage, agriculture, manufacturing and construction.

Financial services have also been hit through reduced remittances from the diaspora.

There is also reduced investment flows in the capital markets and potential flight by investors from the capital market, Yatani said in an interview with Reuters, and elevated non-performing loans in the banking sector.

Taking into account the impact of Covid-19, the projected growth for 2020 has been revised downwards to 2.5 per cent from the baseline of 3.0 per cent and the initial projection of 6.1 per cent in the 2020 Budget Policy Statement, the CS noted.

“Should the pandemic persist, this growth is likely to drop further to below 2.5 per cent,” he said.

Though FKE has asked employers to try and save jobs, the situation will worsen if Covid-19 effects on the economy continue, it has warned.

“Most of our jobs are in the informal sector which is the most hit. We are looking at distressful times,” Mugo said, “Eventually jobs losses will be there,” Mugo said.

The government last month introduced a number of tax measures to try and cushion Kenyans and the economy from the negative impact of the pandemic.

The amended law, which mainly targets low-income earners, includes a 100 per cent Pay As You Earn (PAYE) tax relief for employees earning less than Sh28,000 per month and further lowers turnover tax rate from three per cent to one per cent for businesses.

Those earning above the new threshold will benefit from a PAYE tax reduction of five per cent.

Similarly, the new Act has revised Corporation Tax to 25 per cent while Non-Resident Tax on Dividends has been adjusted from 10 to 15 per cent.

The amended law also lowers the VAT rate from 16 to 14 per cent, a move that is expected to lower the shelf prices of basic commodities.

The massive job losses are a blow to the economy and the country's job market which grew last year, where a total 846,300 new jobs were generates, the Economic Survey 2020 released on April 28 indicates.