Poverty forces Kenyans to rent out spouses, children to tourists

•The Kenyan Coast is sitting on a time bomb, with tourists visiting the destination ostensibly to have sex with children.

•But child prostitution is not only prevalent but also socially accepted in towns and villages along the Coast. Authorities and charities are struggling to  alt the illicit trade. 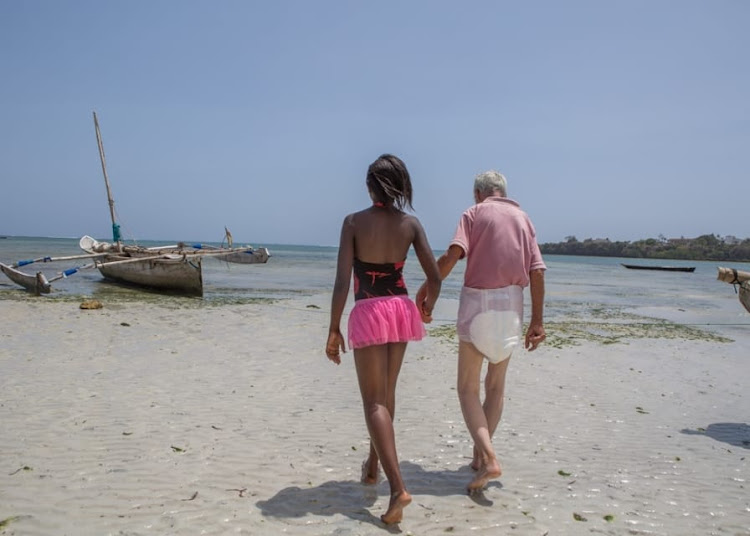 "Why should I make another woman rich yet my wife is jobless?"James Kimani, a tour guide at Kilifi, asked after a tourist asked him to hook him up with a woman for a weekend.

Kimani said the tourist was rich. He had seen him sponsor all his five friends on various excursions.

He wanted a lady to keep him company during his holiday in Kenya.

"After giving it a thought I said, 'Yes I have a nice, bubbly woman. She is dark-skinned, well endowed and naughty. She is my younger sister, very single and well behaved. I can bring her tomorrow," Kamau said.

Kamau was describing his wife. They have been married for 10 years.

On the evening of August 2018, he went home and made the proposal to the wife.

"Honey, the man is German. I will take you tomorrow to him. All I need you to do is act like my sister avoid raising any suspicion and satisfy him fully. Once he pays you, we will need that money to pay school fees for our two children," he said.

The woman accepted and ever since she has been in business. Her husband hooks her up with rich visitors.

She takes home Sh40,000 monthly from the trade.

"We still love each other, we are still married and she supports this family. She is the breadwinner," Kamau said.

Kamau hooked her up recently with an Austrian man and she has been away from home for two weeks.

"All's well. I trust she will come back. The longer she stays the more money she brings home. Meanwhile, am taking care of the children as she hustles," he said.

He receives cases of women with two husbands, a Kenyan and a European. The women travel abroad to see their European husbands who happen to be their sponsors.

When they come back to Kenya they settle with their local husband.

"Recently there was a case of a woman with two husbands, a foreigner and a Kenyan. She shares her house with the foreign husband when he comes to Kenya and when he leaves the country her Kenyan husband comes back home, " Okeri said.

When her father started building a new house in their homestead in Kilifi, Esha* (not her real name) did not know she was the “commodity” to be ...
News
3 years ago

In 2018, tourist arrivals increased by 37.33 per cent from the previous year to cross the two million mark for the first time, posting significant growth in earnings to Sh157 billion.

The latest statistics show there were 2,025,206 tourists arriving compared with 1,474,671 international arrivals in 2017. The gains of the sector were a result of coordinated efforts between various arms of government,Tourism CS Najib Balala said while releasing the data at State House, Mombasa.

Tourism is a vital economic pillar providing millions with employment and accounting for about 10 per cent of the country's gross domestic product.

But in cities and towns such as Mombasa, Watamu, Diani, Kilifi and Malindi dotted along the coastline, foreign visitors have for years stoked the demand for sex with local young women — and minors.

"The lowest age of girls 11 years while for boys it's 13 years. About 60 per cent of the victims are girls."

Adhuoch said prostitution has led to an increase in unwanted pregnancies and sexually transmitted diseases.

The latest records highlighted Kilifi as the county with the second-highest percentage of pregnant minors. Other coastal towns have a high prevalence of HIV.

"This shows the gravity of child sex tourism," Adhouch said.

He said  Ukunda, Malindi,  Watamu,  Mtwapa and Kilifi are hotspots for sex tourism but the trade extends throughout the Coast,  including Diani.

The main causes of sex tourism are the tourist themselves and poverty.

"Tourists are the main drivers — Many of whom are drawn to the Coast by the area's reputation for sex tourism. Poverty is also a major contributor," Adhuoch said.

Mombasa is Kenya’s biggest human trafficking hotspot, a new report says. The report released in Mombasa on Monday said most victims are lured by ...
Counties
4 years ago

"In those apartments owned by Europeans a lot happens that goes unnoticed. This is where children are molested but the government does not make efforts to monitor these homes," Auma said.

Auma said in some cases minors are molested and sold.

"At Mtwapa children are sold off to tourists in the evening. The cases are swept under the carpet for the foreigners are rich and can corrupt the system," Auma said.

He said Auma said the Tourist police have done little to fight the vice. They give tourists a  pass despite having evidence against them.

Mtwapa police boss Joseph Muriuki said though the cases are many, few are reported. He said people, especially victims, fear coming out for fear of being victimised by their families, who sometimes depend on them.

“We cannot tell if someone is undergoing such torturous acts unless they come out and speak, then the security will act on the information,“ he said. 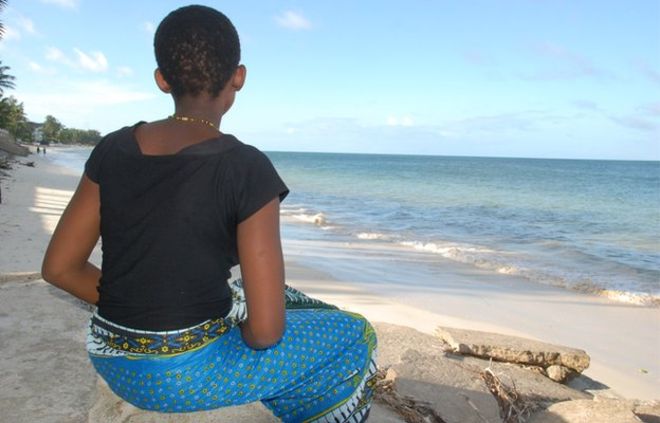 PREY: Children as young as 12 say they are being lured into prostitution and pornography by tourists.
Image: COURTESY

Seventeen-year-old Ann Kanini does not mince words when asked why she tours eaches in Malindi, Watamu, Kilifi and Mtwapa.

"To look for Mzungu's( Europeans) for transactional sex," she replied giggling over a tot of tequila. "It’s very simple to lure a white man, approach them with compliments designed to break the ice."

"The money will begin to flow,” she said, referring to payments once a temporary relationship has begun. “Most village girls do it. I  can get Sh3,000 to Sh5,000 a day. Sometimes a tourist will give Sh10,000. ”

Kanini said it is important to learn foreign languages especially Italian and German to prosper in the lucrative business.

"First, know the language he speaks. Second, tell him he is the most handsome man you have ever seen. For the first time in years, he truly believes he is desirable.”

Kanini was in Form 2 in  2017 when her father asked her to drop out in school and help him hustle.

"My father was struggling with paying my school fees so when he said he will show me ways to hustle for money,.I was overjoyed, I saw it as a shortcut to success," she recounts.

After she quit school, her father (a beach boy) got her a job as a curio seller at Watamu beach.

"I was so happy my job entailed approaching tourists along the beach, convincing them to buy cowrie shells and necklaces. I earned between Sh200 and Sh1,000," she said.

Her father, however, planned to introduce her to the sex trade. On a Sunday afternoon, as Kanini sold her cowrie shells to tourists at the beach, her father walked up to her.

"That Italian man with blue shorts loves you. You have captured his attention," her father said.

"Oh, thank you," she said, not understanding his meaning.

Her father drew her aside and told her he intended to introduce her to a lucrative business that would earn her Sh5,000 a day.

"The business was sex and the deal was I would be assisting in paying water and electricity bills for our house. Then the rest of the money was mine. I trust my father so I gave in to the idea," she said.

My father told me not to tell anyone he hooks me up with that he is my father.

"He said I refer to him as my good friend. I panicked and was very disgusted when I had sex with the Italian at a cottage. He was the age of my grandfather and couldn't stop coughing and sneezing," she said.

The Italian, however, paid her the Sh10,000, more money than she had ever seen.

"I had never touched such an amount before. The business was surely lucrative. I abandoned selling of curios to concentrate on selling sex," she said.

In a good month, she receives a client every day.

Most of the tourists in Malindi , she said, come from Italy and their clients are mostly Italian men between the age of 50 and 80, she said.

"My father taught me Italian so it was easy to communicate with the clients he hooked me up with," she said.

Kanini learnt German as well and two years later she does not need her father to hook her up anymore.

"I can speak foreign languages, I am courageous and approach them for sex," she said.

She said the business has led her to build a home for a family in a very short time.

"I can't stop selling sex to tourists. I am the breadwinner in our family," she said.

Local men and women who are well connected are used to visiting poor villages and recruiting minors.

"They approach parents and promise them money in exchange of their children," a source said.

Most parents readily accept the deal and force their children to have sex with clients in order to earn their school fees.

The cartels take the minors to apartments where they hook them up with the tourists.

The money is sometimes shared among cartels and their parents, the children get nothing.

The 23-year-old man who bragged of sexual encounters with minors on Facebook claiming he could not be arrested was yesterday charged with child sex ...
News
4 years ago

As night falls, Adriana de Morais patrols the clubs and bars of Natal, one of Brazil’s World Cup host cities, looking for underage prostitutes and ...
Sports
8 years ago

A New trend of commercial sex tourism has emerged in Malindi targeting young boys to engage in affairs with tourists for money. It is alleged ...
News
9 years ago

Child sex for a dollar on Kenya's palm-fringed beaches

p { margin-bottom: 0.1in; line-height: 120%; } Sixteen-year-old Fatma doesn't bat an eyelid when asked what she has been doing since dropping out ...
News
4 years ago
Post a comment
WATCH: The latest videos from the Star
by LYNDSAY NYAWIRA News Reporter
Big Read
19 October 2019 - 05:00
Read The E-Paper