NOT ALWAYS A DEATH SENTENCE

Timothy Lokaale survived colon cancer despite late diagnosis after 13 cycles of chemotherapy. He also beat depression after his wife, convinced he would die, took off with funds raised for medical bills 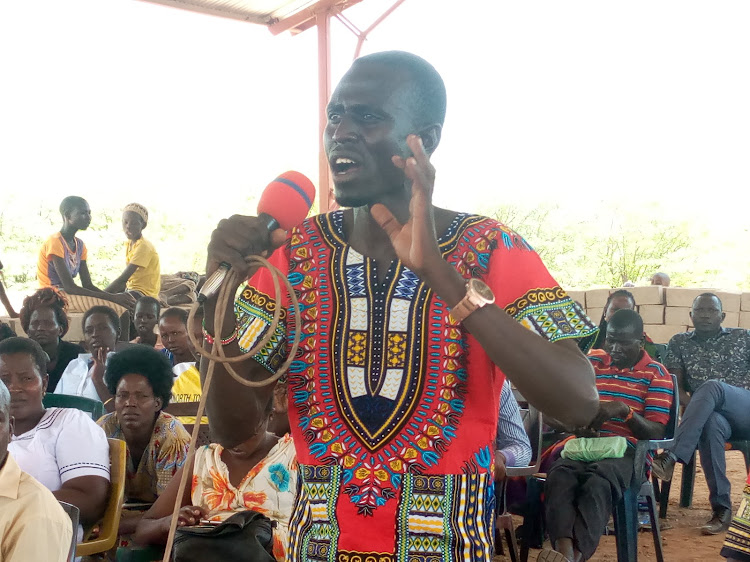 As cancer kills 90 Kenyans a day, including the high and mighty, a rare survivor story despite late diagnosis comes from Turkana county in the form of Timothy Lokaale, 28.

Lokaale, who lives in Katilu, Turkana South, got a medical report in 2017 indicating he had been diagnosed with stage III colon cancer. He thought it was the end of his life.

The father of two and family breadwinner worked at Milima Tatu Dispensary in Turkana North as a counsellor in HIV care and treatment.

Lokaale was admitted to Lodwar County Referral Hospital on May 4, 2017, for a check-up after having unbearable stomach pains for a week, causing distress and loss of appetite.

An X-ray was done and doctors detected a tumour in the colon. It needed an operation to remove it and send it to Lancet in Eldoret for a biopsy by pathologists.

Lokaale hails from a poor family that practices nomadism, pastoralism and moreover depends on relief food from the government and humanitarian agencies for survival. On May 23, 2017, he was dismayed to receive the medical report from the pathologists that diagnosed him with stage III colon cancer at his youthful age.

His wife, relatives and friends, who were supporting him in the hour of need, did not expect such a medical report.

“I knew there was something wrong with my stomach. I had unbearable pain that I could not withstand. I really wanted to know what had been transpiring to my health,” Lokaale said.

"My dear wife, close friends and relatives hesitated to share the medical report until I demanded it for perusal."

10 prominent Kenyan figures who have died of cancer

Cancer has killed Kenyans from all walks of life.
News
3 years ago

“I could not believe what the medical report read. I had to seek interpretation and guidance from my doctor friend working at Lodwar County Referral Hospital,” Lokaale said.

"He confirmed the report and since the hospital has no treatment for cancer, he advised that I approach Chandaria Cancer Centre, Moi Teaching and Referral Hospital, to start treatment."

The news was heartbreaking to those who knew Lokaale. Many people believe cancer attacks rich people and those in old age.

Since Lokaale had worked as a counsellor in HIV care and treatment for a couple of years, he developed confidence that life has to continue and accepted his condition as he sought treatment.

In early June of 2017, Lokaale travelled to Eldoret, where he opted to seek treatment at Mediheal and not Chandaria Cancer Centre, MTRH, as directed earlier.

He said he was then admitted for a month while being treated. He started the first cycle of chemotherapy and was discharged in early July, when his health improved. He was told to come back for check-up and treatment, but due to financial constraints, he missed the appointment.

The doctor said the second surgery is risky and could even lead to health complications and death. But due to the stomach pains that I could not withstand, I consented

For many years, Turkana has been plagued by insecurity, poverty, illiteracy, underdevelopment and devastating drought, resulting in hunger and starvation.

Lokaale, raised in poverty with his five brothers and three sisters, showed interest in joining school, where he could get a meal a day. Humanitarian agencies donate food in schools as a way of attracting pupils to join school for learning.

Lokaale did well in school and managed to complete his studies in counselling. He secured a job in the county government's Health department, where he works as a counsellor.

“My salary, however, could not help to clear the bill for treatment at Mediheal, which cost Sh280, 000, because all of our family members depend on what I earn for survival," Lokaale said.

"Through the help of friends and local leaders by creating WhatsApp groups and sharing on social media for my aid, we raised Sh80,000 and the Health department cleared the remaining balance of Sh200,000.”

In November 2017, Lokaale noted some changes in his health condition, which had improved after the chemotherapy. He lost his appetite, developed unbearable stomach pain, became weak and rapidly lost weight.

“I realised it’s not well with me, I'm feeling the same symptoms I experienced before being diagnosed with stage III colon cancer,” he said.

"I didn’t imagine I could be well again. All my worries were on my dear wife, two children and people who depend on me, but I knew God had a purpose."

Lokaale's wife advised that they visit Chandaria Cancer Centre, MTRH, for another check-up. Along with close friends, they were forced to look for ways to fundraise again for him to seek treatment in Eldoret. They created WhatsApp groups that campaigned for the fundraiser.

WHAT WIFE WAS TOLD

You are wasting your time and little resources that you have to save life that cannot be cured. Let him die in hospital, you look for another man who will take care of you and your children.

In December 2017, Lokaale went to the cancer centre for a check-up and to start treatment. Scanning was done and the doctor noted that the tumour had developed again.

“The doctor advised that another surgery be done to remove the tumour in the colon. He said the second surgery is risky and could even lead to health complications and death,” Lokaale said.

"But due to the unbearable stomach pains that I could not withstand, I consented for another operation that could give a chance for hope in life."

In January 2018, Lokaale was discharged after having a successful operation and told to prepare for the complete 12-cycle treatment of the disease by use of chemical substances, the process known as chemotherapy.

“The bearer has stage III colon cancer. Surgery has been done. He needs to start chemotherapy urgently every two weeks for 12 cycles,” the medical report from Dr Busa Khamala at MTRH read.

The cost was about Sh40,000 per cycle, inclusive of three days of in-patient care per cycle. Total cost for 12 cycles would thus amount to Sh480,000.

Before Lokaale turned up for chemotherapy in February, he got claims from people that chemotherapy is the worst treatment and that it should be his last option.

"People said it’s so dangerous that it can even change the skin colour of the body and cause loss of hair and nails. My wife was shocked and disappointed when she heard those claims and even thought it could be my end,” he said.

But as he was keen on healing, Lokaale wasn't deterred. He travelled back to Chandaria Cancer Centre, MTRH, to start his first cycle of chemotherapy.

“No one can imagine the pain I felt before I started the second cycle of chemotherapy. While in bed at hospital, I got a text message from my dear wife that scared me. I didn’t believe what I read; I had to reread it several times. I don’t know what really had happened to change her mind to such an extent,” Lokaale said.

He said his wife texted that he would die in hospital, and if it happens that he survives, he should marry another woman. She subsequently left with the kids.

When Lokaale shared with his siblings and close friends, he learnt that people had already misled his wife that “cancer is a death sentence and your husband will not survive, he will die soon”.

“She was told: 'You are wasting your time and little resources that you have to save life that cannot be cured. Let him die in hospital, you look for another man who will take care of you and your children',” Lokaale said.

No one wants to hear their doctor say “you have cancer” at any point in life. But apparently, two in every ten Kenyans will get a cancer diagnosis ...
Sasa
6 years ago

Lokaale says since he has experience in counselling, he didn’t give in to depression. Though it was a heartbreaking moment in his life, he gained strength from his true friend.

He said his focus was to complete the 12 cycles of chemotherapy to be healed.

“When I reached the sixth cycle, I noted some changes in my body. I felt I was healthy enough. I increased from 42-54kg, had a good appetite and the stomach pain reduced drastically. It really boosted my confidence of healing,” he said.

In December last year, he completed the chemotherapy and was supposed to clear the bill that amounted to Sh480,000. He again called friends, relatives and local leaders to his aid because the first funds drive that was done, his wife had the money and she didn’t give it out when they broke up.

He said when he cleared the bill, the doctor advised that he should return for several tests to confirm if he was free from cancer.

In January, he did his first test to determine the state of his cancer, but no masses were detected in the colon. He did it again in March and May, confirming he is free from cancer since there were no masses detected again in the colon.

Lokaale said cancer is curable once the patient has faith in God and follows the doctor's instructions on what to do.

He urged the national government to put cancer screening centres in every county so the disease can be detected in early stages and treated with immediate effect.

Courage of a woman who beat late cancer diagnosis

To simply walk around the house is a strain for Catherine Nyambura, 23, but her struggles to do house chores make her courageous in life. The ...
News
4 years ago
by HESBORN ETYANG Correspondent, Turkana
Big Read
31 July 2019 - 06:00