The quest for affordable housing: How will Nairobi meet demand? 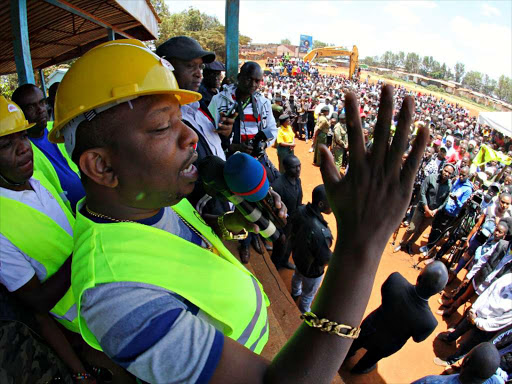 Kenya needs to build two million affordable city homes to meet its housing deficit and stem the growth of sprawling slums, according to the World Bank.

And as the national government grapples with the demand, the Nairobi government is seeking to complement the state’s efforts to help low and middle-income earners own a decent home.

President Uhuru Kenyatta thus chose to include affordable housing as one his Big Four Agenda in his final term. The three other agendas are food security, manufacturing and universal healthcare.

The national government plans to construct about 500,000 affordable houses to bridge the housing gap by 2022. Kenyans will register through an online portal for the housing programme, which will cost Sh1.3 trillion.

Those who want to own houses will pay monthly contributions to support the monumental project. Uhuru will launch the portal tomorrow, on the eve of Jamhuri Day.

Nairobi being the capital city, it is facing the biggest pressure for housing. This is largely driven by unbridled rural-urban migration that has led to sporadic informal settlements among low-income earners.

It is against this backdrop that the Mike Sonko-led county government is working on an ambitious housing programme that will offer cheap yet decent houses to residents. The plan involves building 200,000 affordable housing units in five years that will cost Sh1-3 million each.

Sonko says his administration has already embarked on Phase I of the urban regeneration programme, which targets between 10,000 and 12,000 housing units.

“We have already called for expression of interest for Phase II, and other phases will follow immediately thereafter. In total, we plan to deliver about 200,000 units as Nairobi government,” Sonko told the Star in a wide-ranging interview.

The governor says he has decided to upgrade many of the city’s slums with the aim of uplifting the lives of millions of Kenyans living in informal settlements, which are usually characterised by congestion and poor hygiene.

Nairobi is Kenya’s economic heart, with the city accounting for 45 per cent of Kenya’s GDP, according to UN statistics. However, the city is also home to some of the largest slums and the biggest informal economies on the continent.

Yet the shocking economic division — Nairobi’s inequality levels are among Africa’s highest — still runs roughly along the blurry line that separates the city’s formal and informal worlds.

Nairobi alone accounts for 24 per cent of the country’s informal workers. And the informal sector will grow even faster in the coming years, generating nine out of every 10 new jobs, according to statistics by the Kenya Bureau of Statistics.

But the situation could be reversed, albeit marginally, following the county government’s plan to upgrade several slums in Nairobi. The capital city is surrounded by several large slums, and Kibera is one of the biggest in sub-Saharan Africa.

Sonko says these slums will have to be transformed, upgraded and essential amenities provided under his radical plan, which aims to deliver decent homes for millions of slum inhabitants.

“I promised better living conditions for our people. That is what my administration is focused on delivering, as well as supporting the President’s housing plan under the Big Four agenda,” Sonko said.

The Nairobi governor says they are negotiating a 70:30 ratio with developers, whereby, every project must have at least 70 per cent houses at a cost of less than Sh3 million. The developers can then build more expensive units on 30 per cent of the project.

However, one of the biggest challenges in delivering the 200,000 housing units for the Nairobi residents is land availability.

For instance, Sonko says, a number of parcels of land earmarked for the housing project are on the flight path of the Moi Air Base and Wilson Airport. This has led to some of the housing projects being reduced from 30 to 14-storeys.

“I want to appeal to Kenya Civil Aviation Authority to call for a meeting with the Nairobi city county government, the Department of Defence and Ministry of Transport to clearly map out the flight paths. This will allow us to build taller buildings in areas outside this path,” Sonko says.

The governor explains that they have also earmarked some informal settlement for upgrading. These include the Mukuru kwa Njenga and Mji wa Huruma slums.

At the same time, about 30 county-owned estates will be renovated in a Sh300 billion urban renewal housing project that has already started.

Sonko says some of the estates to be renovated are old and new Ngara, Pangani, Jeevanjee-Bachelors, Ngong Road Inspectorate staff quarters, Uhuru and Suna Road.

He says the first phase of the housing programme is expected to put up 10-12,000 units, which will be among the 200,000 units the Nairobi government wants to construct.

Sonko says the tenants living in the city estates that have been earmarked for renovation will be fully compensated before moving out.

“After completion of the project, those who are currently staying in the estates will be given first priority. The new houses will not attract new charges, that is something that every person should also need to understand,” Sonko says.

According to the national government, the key design principle for the construction of the 500,000 housing units include an open space, smart technology, safety and security.

Therefore, all the new houses that will be done under this project should have these special features.

Sonko says the estates will also have amenities such as schools, community centres, retail centres and clinics.

The national government has now released the project delivery and finance framework overview of the process of conceptualising the housing programme.

To enhance programme segmentation, the housing plan has defined four levels of housing types, with only three being the focus of the programme.

According to the Presidency, the implementation of the project has been divided into four lots in different locations in the country.