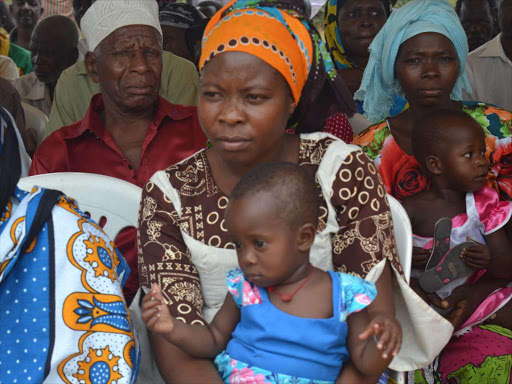 Women with babies attend the official launch of a Sh2 billion fouryear maternal and nutritional programme at the comissioners’ office in Kinango, Kwale, in February 2016 /ALLOYS MUSYOKA

It is 11 o’clock in the morning. Four women are seated under the blazing sun outside a mabati house in a homestead in Nginye, Kajiado county.

One of them is Gladys Saningo, 32, who excuses herself to attend to her month-old baby. We talk as she changes her baby’s nappy before breastfeeding her.

Gladys has four children aged between one month and 10 years. She gave birth to three of them at home. This was due to a number of factors—culture, poor infrastructure and short labour.

“When I gave birth to my first two children, we never went to hospital. Instead, I delivered at home with the help of traditional birth attendants. That was our culture,” she says.

“Additionally, there were no vehicles to take us to hospital. But for my lastborn, the one-month old, I just started feeling pain and before long, the baby was out.”

In 2016, Gladys delivered her thirdborn at Kajiado District Hospital under the free maternity programme rolled out by the government in June 2013.

In October 2016, the government, through the Health ministry, launched the Linda Mama, Boresha Jamii programme under the National Hospital Insurance Fund. The aim was to ensure pregnant women and infants have access to quality and affordable health services.

Gladys has never heard of the programme. And she is not alone.

A few metres from Gladys’s home is Hellen Leparpar’s homestead. Hellen, 40, is a mother of five. She too has never heard of Linda Mama, Boresha Jamii.

She delivered two of her children at home, one in a public hospital and the rest in a private hospital. Her children are between the ages of one and 12 years.

“I have never heard of the programme. All I know is that women can access free maternity in public hospitals, but I really don’t know the process,” Hellen says.

Janet Leyian signed up for the programme in October 2017, when she was six months pregnant. The mother of two lives in Mpiro, Kajiado county.

“I was able to access free maternity services through the programme, and continued to access free services for four months after delivery. I was advised to apply for an NHIF card as part of the requirement to be able to continue accessing the Linda Mama services in future,” Janet says.

Early this year, the NHIF directed pregnant women to register for the programme, warning that those who failed to do wo would be required to pay cash when they went to deliver.

Chief executive Geoffrey Mwangi said it was important for pregnant mothers to register to have an easy time when they seek the services.

In Murang’a county, Lydia Munoku is nursing her week-old baby in Tiiri village, Kandara. Lydia, who gave birth through caesarean Section at Thika Level 5 Hospital, is among the recent beneficiaries of the programme.

By the time she was giving birth, she had not yet enrolled for the programme.

Lydia had gone to Kandara Hospital for a blood pressure check-up, when doctors referred her to Thika Level 5 Hospital. She had high blood pressure and needed immediate attention. At the time, Lydia was 40 weeks and three days pregnant.

“When I arrived at Thika Level 5 Hospital, I was asked if I had enrolled for Linda Mama. Upon realising I had not, the nurses admitted me immediately and promised to take me through the registration after delivering my baby, since mine was an emergency,” Lydia says.

Two days after giving birth, Lydia was taken through the registration process. Thereafter, she was given a receipt for Sh5,000 for services rendered.

“The registration process only required my full names, my baby’s name and my identification card number. I was told I will use the Linda Mama services for free for six months. All my bills were catered for by Linda Mama,” Lydia says with a smile.

Wakesho (not her real name), a first-time mother in Machakos county, delivered her baby at Machakos Level 5 Hospital in June this year. She had not registered for Linda Mama.

“When we arrived at the hospital with my husband, we enquired for the Linda Mama services since I had not registered for it before. But since I am an NHIF member, the nurses advised me that there was no need to register for Linda Mama,” Wakesho says.

But Mwangi says being an NHIF contributor and registering for the free maternity services are two different things.

“When you are a contributor, you stand to benefit from many other packages and that includes the mother’s dependant. But with the Linda Mama programme, it’s only the mother and the child who benefit for six months,” he said in January.

However, this changed in 2016. The national government, through the Health ministry, introduced the Linda Mama programme, whereby funds to cater for free maternity are paid through the NHIF.

“This is not a cancellation of the free maternity deal with counties. Rather, a means of expanding the programme through the insurance scheme for a better package for women,” the then Health CS Cleopa Mailu said.

More than a year since the launch of the Linda Mama programme, many people still don’t have information about it and how to register. This is attributed to lack of awareness creation or information breakdown.

Emily Wangari, a community health volunteer based in Mathare North, says volunteers are equally in the dark, despite dealing with pregnant women often whenever there’s an emergency.

“I only hear about Linda Mama through television adverts. However, there’s a private hospital in Eastleigh whose workers go round in Mathare, asking pregnant women to register for Linda Mama for free,” says Dr Bosire.

“But once a woman goes there to deliver, they usually claim that either the unborn child or the mother has complications.

“Twenty per cent of pregnancies are complicated. So, who’s paying for the dialysis, Intensive Care Unit, newborn care, etc? There are so many other cares that Linda Mama won’t cover, which is really causing the hospitals a lot of distress, and hampering services, particularly the referral hospitals.”

The cost of childbirth in Kenya may vary, depending on whether a mother is having a normal delivery or delivering through C-section.

“The normal delivery cost factors in human resources, drugs, fluids, sanitation, water, sterilisation of delivering equipment, among others. That’s the bare minimum and the cost will vary, depending on where you are,” Bosire says.

“C-section requires more advanced practitioners who can do surgery. Theatre should be factored in, the monitoring process, water, electricity, and the fact that the patient will be in hospital much longer than the one for normal delivery.”

The cost of sanitation in both deliveries depends on the facility where one is acquiring the services.

Bosire says factors such as human resource in government institutions have not been catered for in the Linda Mama programme.

“The healthcare provider is paid a salary, so people forget to bill for that when it comes to other institutions that don’t have the same arrangement,” he says.

To reduce the maternal mortality and morbidity rate, Dr Bosire says the government must be willing to employ, train, retain and continuously empower so they can be able to give the best.

“Access to facilities, infrastructure, availability of commodities like drugs, and equipment must be available. Blood must be available and the national blood transfusion must step up,” he says.

“There’s also need for patient awareness, to help prevent the delay. This is because the delay number one is patients themselves delaying from home, they have a problem and they don’t want or they delay to seek health. People must understand what causes mortality so that they can know what they need to do as an individual.”

Efforts to get comment from NHIF on the information gap and accountability were unsuccessful.

Post a comment
WATCH: The latest videos from the Star
by By Diana Kendi @DianaKendi_M
Big Read
19 November 2018 - 00:15
Read The E-Paper