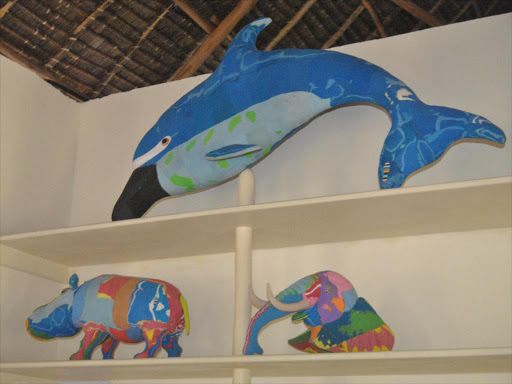 Some of the products on display at The Eco World enteprise centre in Watamu which were made of recycled materials on February 8./ALPHONCE GARI

Environmentalists in Watamu, Kilifi county, have set up an Eco World Enterprise Centre to promote conservation of plastics, glass and solid waste materials that are a major threat to the environment.

The centre, founded by environmental NGO Watamu Marine Association (WMA), is being used as a community enterprise that turns waste into useful products that can be sold around the world.

Eco World was formed in 2009 by likeminded environmentalists and community members fighting the spread of marine debris and plastic waste along the ocean and environs of Watamu, one of Kenya’s renowned tourism destinations.

They formed the ‘Blue Team’, comprising of 25 members of the community employed to collect solid waste from the beach and its environs.

The Blue Team, which has become an icon in Watamu, are able to earn a living from the sales of processed plastics to plastic recycling industries.

With the help of donors and hoteliers supporting the move, WMA bought a plastic crasher machine to crash the recycled plastics, package it and sell it to plastic-generating industries.

Later, the environmentalists bought a two-acre plot in Dabaso near Watamu, where all the recycling is done.

Their idea was to turn trash into cash, engage the community in conservation and generate income from recycling.

Research had proven that rapid urbanisation and increase in population have made it a challenge to manage solid waste in areas like Watamu, a fast-growing resort town.

It was evident that Watamu, like many other coastal towns, had no waste management facilities, which resulted in solid waste pollution of both terrestrial and marine environments.

Watamu Marine Park and Reserve beaches and environs is among the areas highly affected by the solid waste pollution, something which is often strewn by plastics.

In the report published in Swara magazine in October 2015, he says the waste comes from several sources, and some is not locally generated.

“Due to the nature of ocean currents in the region, much of the waste is washed ashore from other countries in the south western Indian Ocean area,’’ he says in the report.

Moreover, a lot of waste is dumped at roadsides and open land by people due to lack of waste collection sites and disposal facilities.

“There is little in the way of public education and awareness to lead local people away from this bad practice, and there is now an urgent need to educate communities to the problem and to create community-based solutions,” says the report.

Trot, who is also the WMA project manager, adds that the Watamu Park and Reserve marine ecosystems are rich in marine life, including: coral reefs, sea grass meadows, mangrove forest and more than 300 species of reef fish.

“Plastics are ingested by dolphins, whales, whale sharks and sea turtles, which are all found in Watamu waters,” the expert says.

He says plastics can smother corals and other marine creatures living on the seabed, inhibiting them from breathing and feeding and resulting in loss of health or death.

“Plastic washed up on the tides impacts beach ecology, polluting the sand, which is home to a myriad of micro fauna that help maintain the beach health and function,” Trot says.

The zoologist says the impact of solid waste is degrading the local environment and threatens human health and welfare and potentially discourages tourists from visiting the area.

Many Coastal people depend on tourism as the primary source of income.

To help tackle the solid waste management, the WMA first built the recycling centre, where all materials are sorted out, ranging from plastics, wine bottles, rubber and other waste materials.

Once sorted, the plastics are crushed into small chips and sold to the plastic recycling industry, while the wine bottles are used to construct perimeter walls, buildings and have proven to be good at the Eco World centre.

The recycling centre, built through donations from friends from Ireland, was opened in 2015 and has been in operation to date.

Beach clean-ups have also helped a lot in recycling of plastics and other solid wastes from the beaches.

Construction of the Eco World centre was completed last year, and products made from rubber and flip flop waste materials are put on display for sale to potential clients in the curio shop.

Mostly, the rubber materials are used to make curtains, toys, decorating handbags, key holders, among many other things that have value in the market both locally and internationally.

In early February, journalists toured the area and witnessed the creative approach used to turn trash into cash, which in a big way helps in environmental conservation.

First, the Eco World centre is a showroom consisting of products made of plastic wastes, which was itself built partly using the waste materials.

The conservationists used wine bottles to build the wall and is very attractive.

Inside the house are hundreds of products made from waste materials, some of which are sold in hotels and abroad at more than Sh10,000.

Wine bottles were used to set up a section of the walls, and instead of using tiles for the floor, they made it using bottom part of the wine bottles with different colours.

WMA chairman Justin Kitsao said the centre is first of its kind in Africa and shall act as a centre of excellence for learning and research.

Kitsao said they used 6,000 wine and plastic water bottles to build the house.

At first, he took journalists to the collection room, where all plastic materials natural products are stored for sorting purposes.

After sorting the plastics, old toothbrushes and polythene, they use the plastic crasher machine to reduce them into small chips.

“We usually sell them to Malindi or Mombasa companies,” he said.

Artists, who are local volunteers from the community around, usually take the flip flops to make different products.

Nothing is thrown away. All the waste has a big potential to produce something useful.

The experts used technology to make a bio digester, which produces methane gas for cooking and lighting.

They take organic waste and mix it with cow dung, which turns into energy that can be used at home.

Apart from gas, the conservationists use the recycled wastes to get liquid fertiliser for crop production.

Their environmental activities come a time when marine debris and plastic waste are endangering the lives of sea mammals in the Indian Ocean.

In January, a dolphin nearly suffocated after it was entangled by a polythene paper. It was saved by the WMA and Kenya Wildlife Service researchers, who removed it and ensured the dolphin was safe.

Apart from saving the ocean, the conservationists have also devised a way of reducing the threat of forest destruction through production of bio charcoal using coconut raw materials.

To them, the Eco World centre acts as a centre for learning institutions, public schools and general public.

“Information is given out to the world. We also bring experts to help in recycling to reduce the threat on marine debris pollution,” he said.

Kitsao says they are able to create employment, keep the beach clean, save lives of sea mammals and turtles and improve tourism.

Moreover, he says, they have created awareness and made health products that are not harmful to the environment.

The long-term plan for the centre is to build more rooms for community groups.

In the remaining part of the land they bought, the conservationists shall build an eco-accommodation made from all plastic wastes.

“This will be a research centre for international and local institutions, expert researchers from all over the world,” he adds.

Their driving force is the fact that the community has accepted that there is a problem and are willing to be part of the solution.

To them, they have proven that every waste has value to the community and can be turned into a useful product for sale at the enterprise.

Each year, the KWS and WMA organise beach cleanups in all the coastal beaches.

The International Coastal Beach Cleanup directs plastic waste collected from other beaches in the county to the Watamu Recycling Centre.

Locally, the initiative is making a significant impact by recycling or reusing glass or plastic waste.

Currently, WMA is partnering with hotels to collect all their glass and plastic waste.

Last year, the environmentalists had projected to utilise more than 50,000kg of plastic and glass wastes.

The success is meant to reduce the waste stream flowing to landfill sites.

According to the experts, glass recycling potential is still in the early development stages in Kenya.

They say innovative solutions for recycling glass waste should be explored.

“Glass bottles, especially wine bottles from local hotels, are being used at the Recycling Centre ,to construct walls. Plastic water bottles, which have a low recyclable value, are also used in construction,” Trot says.

Their other strategy is to recycle waste paper in bulk and to compost organic waste so as to reduce methane (greenhouse gas) emissions at the local landfill site.

Those sponsoring the enterprise include the Watamu community, tourism and private business sectors.

It was approved by the National Environment Management Agency (Nema), KWS and the Kilifi government.

Currently, the enterprise has significantly reduced the pollution threats to beaches, the environment and the general community.

In addition to the clear environmental benefits, the enterprise raises community education and awareness levels on the problems associated with solid waste, resulting in a cleaner and healthier village.

The experts say good waste management reduces the threat of disease and sickness to humans and domestic animals, which ingest plastics and other harmful waste.