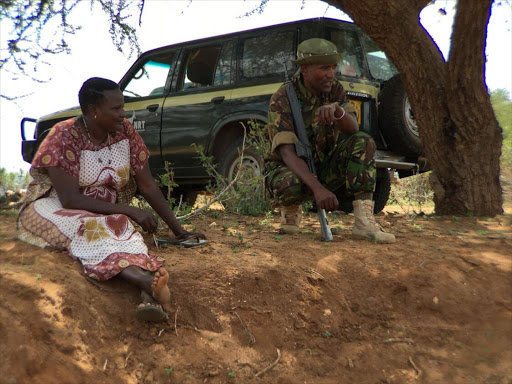 When Lipan Kitonga saw 35 of his 121 goats and sheep that had been stolen after a raid by the Samburu community being returned, he could not believe his eyes. In fact, he had to gaze at them for a moment, lost in thought.

Kitonga, a Kenya Police Reservist, retreated into a nearby shade, perhaps to consult his inner feelings, one of his fingers firmly clutching to the trigger of his AK47 rifle.

He sat under the shade of the tree with his eyes and cheeks wet with emotions for a few seconds before standing again to confirm whether the livestock were really his.

“They are mine. I can tell as I have raised them since they were young. However, I will have to use a lot of resources since they have become very thin and weak,” he said.

Lost in deep thoughts, he moves closer to his livelihood without uttering a word.

“The last thing I would have wanted to do in my life is to hold a gun. In the last few days, I have been running around trying to find my sheep and goats. This has really stressed me,” he said.

At the dead of the night on April 10, eight heavily armed cattle rustlers sneaked into his compound in Leparua, Isiolo county, and made away with 121 goats and sheep.

Before forcing their way into the compound, the rustlers shot endlessly and aimlessly, invoking fear and anxiety in Kitonga’s wife and children, who were then held up in the house. Kitonga was not home at the time.

They then stole 63 sheep and 58 goats, leaving the family with no other means of livelihood.

“When I arrived home, I quickly armed myself before following the footprints of my livestock with my friends. The footprints went towards Samburu,” he said.

Kitonga said the raid was the sixth one in a month, a move that has left many families devastated.

“I was very bitter, having lost my livelihood in seconds. I’m still very sad,” he said.

Kitonga accused the police of inaction.

“My goats and sheep did not just vanish. They were forcibly taken away by people who are known, yet no action has been taken,” he said.

Kitonga said even though part of what was taken away by the rustlers has been returned to him, he is still not satisfied.

Conflicts over cattle rustling in the Isiolo region are not a new phenomenon.

The major causes include proliferation of deadly weapons, climate change, competition over shrinking grazing lands and water resources and politicisation of communal relations.

Elders are also thought to have lost control over morans, who are in most cases thought to take an active role in conflict.

This has forced stakeholders to forge new approaches to cattle rustling.

On April 20, part of Kitonga’s livestock were returned by raiders, courtesy of a peace caravan spearheaded by the Northern Rangelands Trust (NRT).

Returning stolen livestock is complex, dangerous and unpredictable, as the owner might turn violent.

During the return of Kitonga’s sheep and goats, the designated site had to be changed almost three times.

Armed with double-edged, leaf-shaped spatulate blades and clad in their traditional shukas, the Maasai elders sat pensively under the tree from 10am, busying themselves with tobacco.

“They have said that they are coming but we are now impatient, as they have taken a lot of time. They said they have a few sheep and goats but we do not see them,” peace initiative chairman Lela Kinyaga said.

Heavily armed, the Maasai morans sat in a nearby shade, discussing in low tones.

Kinyaga said negotiations at times take very long and could even run up to the dead of the night.

At around 3pm, the Samburu morans, accompanied by elders, trekked to the agreed location with Kitonga’s sheep and goats.

It turned out that the Samburu community had not returned all the 121 goats and sheep that they had taken.

The maasai on the other hand had also managed to return eight cattle they had stolen from the Samburu community.

However, the Samburu still needs four more cattle from the Maasai.

After elders from each group inspects the health status of the livestock, the gap that existed between them is narrowed.

The two at first sit in two different groups about 30m apart, with bitterness, ill feelings and hatred renting the air.

Historically in northern Kenya, community elders were instrumental in resolving conflicts within communities.

This social structure has been somewhat been lost, due to the influences of modern life and political interference.

NRT peace coordinator Josephine Ekiru said the returning of the 35 sheep and goats followed a marathon dialogue between elders of the affected communities and morans.

“We have a strong network from either side of the community, such that when livestock are stolen, we quickly trace their footprints. When we find them, dialogue begins,” she said.

The main objective of the NRT Peace Ambassadors’ Initiative was to empower and involve young people in the peace process.

The 33 member conservancies work across 44,000 square kilometres of northern and coastal Kenya.

With support from principal donors USAid, The Nature Conservancy, Danida, AFD and many smaller donors, NRT is supporting and empowering communities to develop locally-led governance structures.

It runs peace and security programmes, takes the lead in natural resource management and manages sustainable businesses linked to conservation.

Ekiru says at times they get intelligence way before a raid is carried out, which has helped them foil several raids in the past.

“When there is a raid, police reservists and response teams swiftly intervene,” she said.

Ekiru said when livestock have been stolen, the boma where they have been taken to is identified before negotiations, which involve chiefs and elders from either side and conservancies, begins. The progress of negotiations is often reported for further action to be taken, she says.

Ekiru says Morans are used to negotiating as some of them have taken part in raids before.

“When livestock are stolen, they are taken and hidden in the hills, where they cannot be found,” she said.

Kitonga’s goats and sheep, for instance, had been hidden in the hills for at least 10 days.

Ekiru said raids occur on three occasions: during drought, rainy season as well as when elections are near.

She said the matters are made even worse when the community that has been raided plans to “revenge violently”.

When one community comes with less livestock, long negotiations on how the rest will be secured starts afresh.

Ekiru said the situation could worsen as elections, which are normally tribal in nature, beckon.

She said during the rainy season, communities, who are in most cases armed, clash at grazing as well as water points.

For Ekiru, who at some point was the chair of a community conservancy, her community is no longer at ease with her as she is hated and loved in equal measure for her work.

Kitonga said his goats and sheep had violently been taken and as such bitterness was palpable.

He said that he has already used over Sh 60,000 trying to find his livestock, even after engaging the government official.

After all else failed, Kitonga’s friend linked him up with NRT’s peace caravan, which secured his livestock after identifying where they had been hidden.

Kitonga said the end to cattle rustling is not in sight, as many children do not go to school.

“The way they think needs to be changed. If there is no change of mindset, cattle rustling might not end soon,” he said.

Samburu peace initiative chairman Francis Lekurtut said it is not the whole community that steals but individuals.

“We talked with the person who had stolen Kitonga’s livestock until they agreed to release them,” he said.

Lekurtut said violent means were used previously, leading to deaths and the maiming of many.

He said seven cows that had been stolen have since been returned to Laikipia.

The chairman vehemently defended his Samburu community over holding illegal firearms, saying they use them to defend themselves after being marginalised year in year out by consecutive governments.

“Elders should advise their children to use their weapons well while protecting their property,” he said, urging the government not to disarm them.

The government estimates that there are more than 600,000 illicit arms in Kenya.

According to an Annual State of the National Security Report to Parliament last year, the country’s security apparatus admitted in the report to the National Assembly that they have failed to successfully disarm the pastoralist communities of the small arms, light weapons and ammunition.

Lekurtut said marginalisation as well as conflict over resources compels them to acquire weapons, a claim the report echoes.

The arms are particularly among the pastoralist communities in North Rift, North Eastern and Upper Eastern.

Leparua sublocation assistant chief Kithonga Salamet said theirs is just to witness livestock that had been stolen returned to the rightful owner.

“We are trying the alternative dispute resolution to address this problem. We engage them and they update us on what is happening,” he said.

The chief says that what comes out of discussions is normally recorded as points of reference.

“I’m taking part for the first time. We are yet to see the outcome,” he says.

The statistics from NRT shows that there were 116 stock theft cases reported to the operations room last year.

The stock theft recovery (follow -ups) made by the NRT scouts was 95.

Some 302 cows were recovered and 268 camels the same year. Another 851 goats were also recovered.