A History of Currency in East Africa from 1895 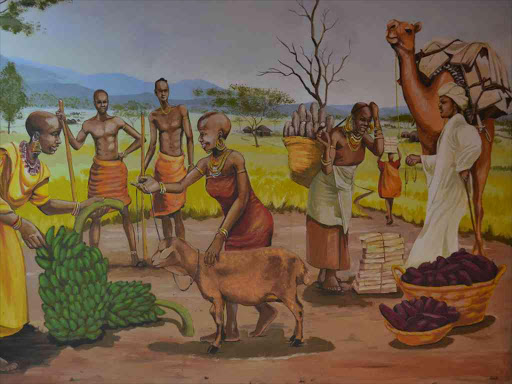 From salt bars to bank notes, the system of trade in East Africa has come a long way over the course of 100 years. The numismatics exhibition taking place at the Nairobi National Museum traces the evolution of currency and exchange in East Africa, from pre-colonial through to modern times, as part of the 50 years’ celebration of the Central Bank of Kenya.

Long before East Africans came into contact with outside traders, traditional African communities were exchanging goods and wares through barter trade, a system dating back to prehistoric times. At market days, which were a customary part of cultural life, some of the most valuable items of exchange were livestock, ironware, salt, weapons, beads, cowrie shells as well as were foodstuffs.

Arab traders travelling through East Africa’s interior in search of ivory, slaves and other goods, were the first to introduce money as an alternative to the cumbersome salt bars normally used as payment.

The currency introduced by the Arabs was an assortment of foreign coins which reflected the multi-national nature of the Indian Ocean sea trade. There were Indian rupees and annas, pice bronze coins, British florins, and silver Maria Theresa thalers that originated from Austria.

When the 1885 Berlin Conference carved up Africa among the European powers, Uganda and Kenya were allocated to Britain. The Imperial British East Africa Company (IBEAC) that administered East Africa before it became a formal protectorate issued the Mombasa Coins between 1888-1890. These were minted in India and were in a mixture of rupees, annas and pice.

In 1896 the British began building the Kenya to Uganda railway using labourers from British India who were paid in rupees. This further spreading the use of cash in East Africa and the rupee acquired different local names such as zirupia or chirupa in Luhya, rupia in Luo, iropiyani in Maasai, rubia in Kikuyu and ropyen or robia in Kalenjin.

The coins often had a hole in the centre so that they could be strung together for ease of carrying in the days before wallets and purses. Today these vintage goings are now collectors’ items.

With the growth of inland trade, agriculture and colonial settlement, banks began setting up shop in East Africa giving people a safe place to keep their money. The National Bank of India was the first to open with offices in Zanzibar, Mombasa and Nairobi in 1892, 1896 and 1904 respectively.

In 1919, the colonial administration combined the Uganda and Mombasa currency boards to form the East African Currency Board (EACB). It was mandated to manage the currencies in the two protectorates and in Tanganyika, formerly a German territory that came under British administration in 1920 after World War I. The first coins introduced by the EACB were silver florins in 1920, although the India Rupee remained in use for a while longer.

When silver became too expensive during the World War I, florin coins were phased out and substituted with florin notes. Then in 1921, the florin was replaced by the East African shillings and cents, with the one shilling and 50 cent coins having a silver content of just 25%.

Zanzibar changed from rupees to the shillings in 1936 after being incorporated into the EACB. That same year, 5 cents and 10 cent coins were made for the newly crowned King Edward VIII. But he abdicated the throne after just 326 days and was succeeded by his brother who became King George VI.

Shilling bank notes came into circulation in 1943 because World War II had yet again driven up the cost of silver. The EACB introduced notes of 5, 10, 20, 100, 1000 and 10,000 shillings. They were imprinted with the equivalent value in Sterling pounds and had numeric values in Arabic and English. After the second world war, one shilling and 50 cent coins were made from cupro-nickel and contained no silver.

When Britain took control of Italian East Africa (Ethiopia, Eritrea and Somaliland) in 1941, they introduced the East African shilling there to replace the Lira. Then in 1947, India obtained independence and after this, all new East African currency omitted the phrase REX ET IND:IMP, which meant ‘king and emperor of India’.

Princess Elizabeth was on a tour of East Africa in February 1952, when her father King George VI passed away. Once more, new notes and coins were minted portraying the face of the new queen. In 1958, a second series of Elizabeth II banknotes were designed but without the pound conversion imprinted on them.

Another banknote redesign happened when the EACB operations were relocated from London to East Africa in 1960, and the number of signatories rose from four to seven to include those of local settlers.

After attainment of Kenya’s independence, new currencies were issued in 1964 which did not have the head of state on them. These were the 5 cent and 10 cents ‘Uhuru’ coins which had no writing on them.

The new banknotes were in denominations of 5, 10, 20 and 100 shillings, and, for the first time, had Swahili inscription on them. This set of notes were known as the ‘Lake’ series because their design included the image of a dhow on Lake Victoria which straddles Kenya, Uganda and Tanzania.

This was the last set of currency issued by the East African Currency Board before it was dissolved and replaced by the central banks of the three countries. In 1966 the Central Bank of Kenya introduced its first set of shillings bearing the portrait of Kenya’s first president, Jomo Kenyatta. But since the promulgation of the new Constitution in 2010, portraits cannot be depicted on Kenyan currency.