The Janssen jab is a one-shot dose.

• The launch of the exercise comes five days since the country received a donation of 1, 058,400 Johnson & Johnson’s Janssen (J&J/Janssen) vaccine from the government of the US.

• The consignment was delivered on Saturday through COVAX in coordination with the African Union. 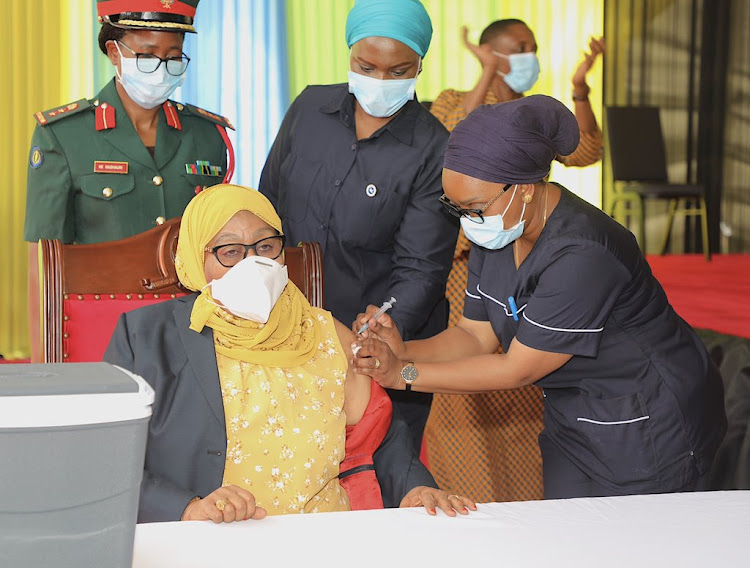 Tanzanian President Samia Suluhu has received a Covid-19 jab on Wednesday at State House where she launched a vaccination exercise.

The president said her move to receive the jab publicly is meant to instill confidence in citizens that it is safe.

The launch of the exercise comes five days since the country received a donation of 1, 058,400 Johnson & Johnson’s Janssen (J&J/Janssen) vaccine from the government of the US.

The consignment was delivered on Saturday through COVAX in coordination with the African Union.

The donation is part of the US pledge to provide at least 25 million of 80 million doses globally to Africa.

In her speech before receiving the vaccine, the president reminded Tanzanians that the Janssen jab is a one-shot dose.

She said that the government has put in place measures to ensure that the Tanzanians who are willing to be vaccinated get the jab.

The president has also called upon all the politicians, artists, and other stakeholders to take part in reducing the effects of the disease by taking the vaccine.

Suluhu has also asked the Ministry of Health and artists to reach out to some of the citizens who are rejecting the vaccines in the name of religion.

“Vaccination is all about faith. And for those of us who have misleading faith about the vaccine, I am asking the Ministry of Health, our artists, and the media to tell them the benefit of the vaccine,” Suluhu said.

The president has also urged Tanzanians to continue observing the guidelines that have been set to curb the spread of the virus.

For those who are still doubting the presence of the deadly virus, the president directed them to ask some of the families which have been affected by the disease in one way or the other.

“Go to Arush, Kagera, and Dar es Salaam and see for yourself the families that have been affected by this virus. They have a lot to tell you, and if they had an opportunity to be here today to be vaccinated in order to avoid the negative impact that they have faced.”

“If this pandemic has not hit you, you can say anything but the point it will affect you, you will know its effects."

Tanzania receives one million Janssen Covid vaccine from the US

Ministry said health workers and those aged 50 and above will be prioritised.
Coronavirus
2 months ago
by KEVIN CHERUIYOT Online Journalist
Africa
28 July 2021 - 13:01