AU, US in another attempt to broker Ethiopia dam dispute

Khartoum called for internationalision of the dispute to include the US, the EU, the UN and the AU after the parties failed to reach a three-way deal in Kinshasa

• President Joe Biden's special envoy to the Horn of Africa Jeffrey Feltman also met with parties in the GERD row. 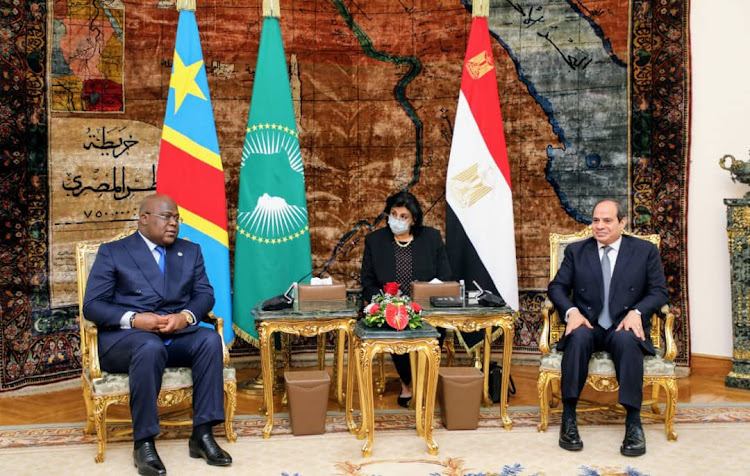 The African Union and the US this week continued their shuttle diplomacy to broker a deal over the controversial Grand Ethiopian Renaissance Dam.

DR Congo President, and African Union chairman, Félix Tshisekedi this week embarked on a diplomatic tour of the Horn of Africa, where he met the leaders of Sudan, Egypt and Ethiopia.

President Joe Biden's special envoy to the Horn of Africa Jeffrey Feltman also met with parties in the GERD row.

While Ethiopia says the dam project is key to its economic development and power generation, Egypt fears it will reduce its supplies of the Nile water, while Sudan is concerned about its safety and water flows through its dams and water stations.

On Saturday, President Tshisekedi paid a working visit to Sudan where he met with his counterpart, Abdel Fattah al Burhan, President of the Transition Council.

The DRC presidency said Tshisekedi, in his capacity as the AU chairman, and his Sudanese counterpart addressed several continental issues, including the Ethiopian Renaissance Dam.

"Talks mainly focused on differences between upstream and downstream countries over the renaissance dam," the agency said.

Ethiopia is pushing to fill the dam for the second year in a row against the wishes of Egypt and Sudan.

From Khartoum, the Congolese leader headed to Cairo, where he met with his Egyptian counterpart, Abdel Fattah al Sisi and discussed GERD.

“[As the] facilitator in the negotiations around the Renaissance Dam, the Head of State, is in Khartoum, [and] expressed his desire to see this case lead to a full and final settlement opening a new page of cooperation between Egypt, Sudan and Ethiopia,” DR Congo’s presidency said on Sunday.

In Ethiopia, the AU chair was on Monday received by Minister of Water, Irrigation and Energy Seleshi Bekele and Foreign Affairs state minister Birtukan Ayano at Bole International Airport.

"In view of the successes which sanctioned the working sessions in Khartoum and Cairo, and the tripartite meeting in Kinshasa, it is appropriate to hope for a favourable outcome to a concerted solution taking into account the interests of each of the three states concerned," DR Congo said.

PM Abiy reiterated that Ethiopia continues to be committed to "African solutions to African problems" and to an AU-led process under the facilitation of Tshisekedi.

"He also emphasised Ethiopia’s firm position that GERD can be an icon of cooperation and mutual development among the downstream countries, with a commitment of no harm to both. Ethiopia affirms its desire for an agreement that works for all parties in accordance with the Declaration of Principles," the Office of the Prime Minister said on Tuesday.

Feltman, on the other hand, expressed the US's commitment to supporting efforts to bring amicable solutions to the parties involved in the GERD negotiations.

He also met with AU Commission chairperson Moussa Faki and held "fruitful discussions on matters of mutual interest related to his mission".

According to the US State Department, Feltman has been tasked to lead a sustained diplomatic effort to address the interlinked political, security, and humanitarian crises in the Horn of Africa.

The US diplomat also met Egypt Foreign minister Sameh Shoukry and his Irrigation counterpart Mohamed Abdel Aty on May 5 as well as the top leadership in Sudan on May 9.

Khartoum called for the internationalisation of the dispute to include the US, the EU, the UN and the AU after the parties failed to reach a three-way deal in Kinshasa in April this year.

Why Egypt called on America to mediate Gerd dam standoff

Ethiopia does not need permission to fill dam — envoy

Trump said last week that Egypt might "blow up" the Ethiopian-built dam.
News
9 months ago
by ELIUD KIBII Subeditor and writer
Africa
16 May 2021 - 18:35