President Ruto built them a class; they used water to reduce teenage pregnancies

• Occasionally, the stomach upsets would be due to pregnancies, but mostly, it was due to diarrhoeal diseases due to a lack of clean water for the girls.

• This borehole was serving more than 800 students and the community in Karon village surrounding the school. 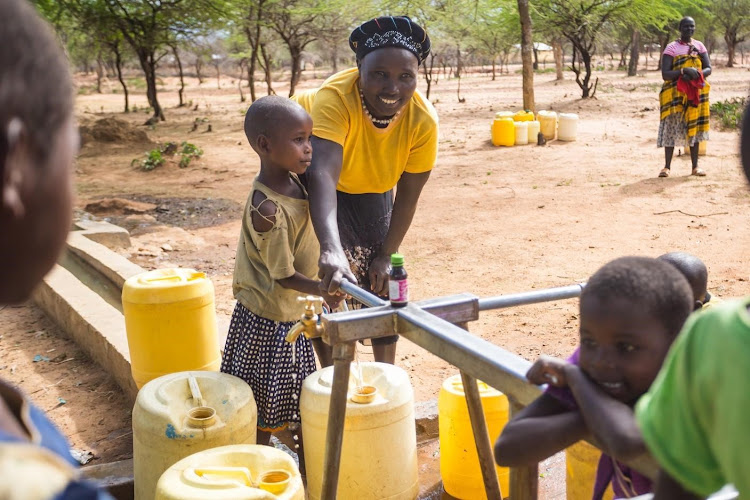 Paulina fetching water at one of the water collection points (tap stand) at Karon village in Kacheliba in West Pokot County in April 2021.
Image: LAMECK ODODO

During his campaigns in West Pokot, President William Ruto passed by St Bakhita Secondary in Kacheliba in North Pokot.  Then only five years old, the school had few classes for its 362 students. The president donated money— an amount the school administration did not disclose— to construct more classes, a lab and a dormitory in 2018.

When the space problem was eliminated, the principal, Grace Akure, still made numerous trips to the hospital to sort out another problem: every day, she would escort at least 25 of her students to the hospital for diarrhoeal diseases and injuries. Occasionally, the stomach upsets would be due to pregnancies, but mostly, it was due to diarrhoeal diseases due to a lack of clean water for the girls. The school, which has a secondary and primary section, only had one manually operated borehole in the school compound. This borehole was serving more than 800 students and the community in Karon village surrounding the school.

This sharing was where the trouble for the girl and their teachers emanated. The borehole would break down, forcing the girls to fetch water in a nearby river outside the school compound as they waited for the repair of the borehole. Open and used by communities and animals, the water from the river was not safe for consumption, mainly due to the low latrine coverage in the county.

According to West Pokot County's health department, 45 per cent of people in West Pokot defecate openly. The number could be higher in more economically challenged parts of the county, such as North Pokot, where the school is located. The human waste often ends up in rivers such as Karon, which the community turned to when the borehole failed.

"There were very many cases of typhoid," Mrs Akure said.

The students also took more than two hours to fetch the water, making several trips to the river.

"The girls, the cooks and even teachers would sometimes help fetch water, and this would take as many as two hours, eating into the time they should study," the school principal said.

On these trips, some students never returned to school with their classmates. In addition, a few of the cases of the disappearance resulted in pregnancies months later. 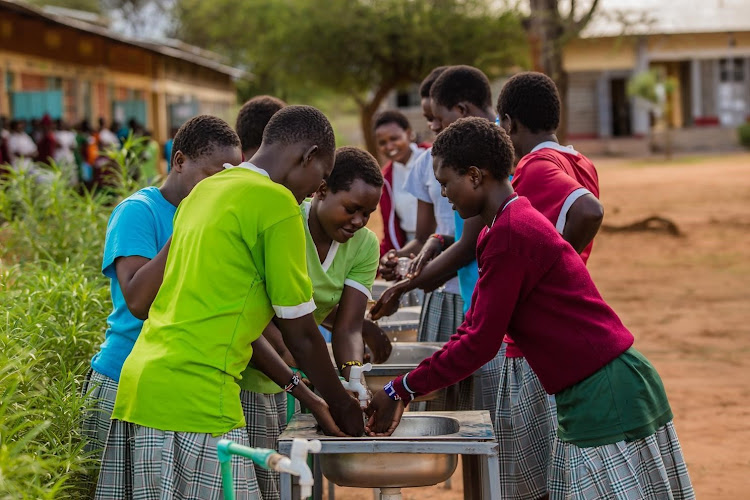 Students at St Bakhita Girls in Kacheliba in West Pokot County wash their hands from the handwashing stations, which get water from the upgraded solar-powered water system.
Image: LAMECK ODODO

It was not just time for the school but money as well. The technicians who could fix the borehole came from Kapenguria, the county's central business district and headquarters, about four hours' drive away. As the school waited for the technicians, the principal would fetch water from the neighbouring Kacheliba Girls Secondary on motorbikes. But unfortunately, this alternative drained the school's finances.

Mrs Akure said: "The riders would charge Sh50 for one 20-litre can, and you can imagine how much money you would spend in a day for enough water for a school of more than 300 for cooking, drinking and bathing."

"Even with the borehole working, the water was not enough, which affected the students' observance of hygiene," the principal added.

Even with a functioning borehole, the school was not free of trouble. The students would fight with the community at the water point. In addition, with the ease of access to the school compound, the students complained of losing their property.

Often the lack of clean water in societies is viewed from a public health lens, and rightfully so. According to UNICEF, 9.9 million people in Kenya "drink directly from contaminated surface water sources." Consuming dirty water exposes them to deadly germs that cause waterborne diseases such as Typhoid and Cholera. However, little attention is given to poverty when communities lack clean water. Paulina Chemandan, a small-scale businesswoman in Karon village, said that all of her time went into fetching water for her family in the river when the boreholes broke. 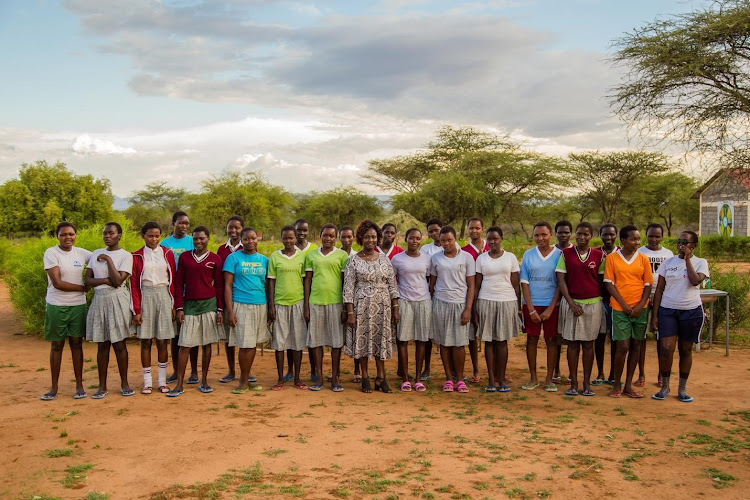 Grace Akure, the principal of St Bakhita Secondary School in Kacheliba in West Pokot County, with the students standing behind the drinking and handwashing points in April 2021.
Image: LAMECK ODODO

"Apart from the diseases, the journey was often long and making it left me no time to do any other thing," Paulina said.

The mother of three said that fetching the water from the shared borehole was not easy either: pumping the water required so much energy and left her with chest pains.

Therefore, water is linked to the communities' health and dignity. A humanitarian working in the county against malnutrition upgraded the boreholes and fitted a solar-powered water system to serve the community and the school. The 10,000-litre storage tank provides water for the dormitories, the kitchen, and the school compound's drinking points. In addition, the girls can spend their time studying.

"There is a great improvement in their hygiene practices since we got the water," the principal said.

The school no longer spends money fetching water from the neighbouring water collection points. For women like Paulina, the clean water from the borehole is more time with her family and her business and lesser anxiety over diarrhoeal diseases.

In this form of ownership, the community held a meeting with the school where the two parties agreed that the community would only fetch the water between 10 am and noon to avoid misuse. Daniel also congregates in the community whenever the water system needs repairs, such as broken pipes.

This story is part of the “Focus on the North” project produced in collaboration with Defrontera Media Group in the Star’s solutions journalism initiative.