Ruto is honest, Mt Kenya is happy with him - Gachagua

The DP reiterated that he would continue to engage with all leaders in the region.

•The DP described Ruto, as an honest leader who keeps his word citing the many key appointments of Mt Kenya leaders in his government.

•He singled out appointments to the Cabinet and Principal Secretaries, saying more senior appointments were on the way. 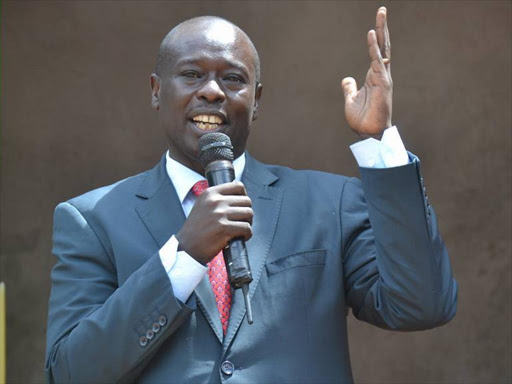 Deputy President Rigathi Gachagua during a past event.
Image: File

Deputy President Rigathi Gachagua has rallied the Mount Kenya region to maintain the unity of purpose and support President William Ruto and his government's development agenda.

Gachagua said the region is "extremely" happy with President Ruto for fully involving the region and its leadership in his government.

The DP described Ruto, as an honest leader who keeps his word citing the many key appointments of Mt Kenya leaders in his government.

He singled out appointments to the Cabinet and Principal Secretaries, saying more senior appointments were on the way.

The DP reiterated that he would continue to engage with all leaders in the region irrespective of their political persuasions to rally them behind President Ruto and the Kenya Kwanza administration.

Gachagua spoke at Murang'a Technical Training Institute in the Maragua constituency, where he commissioned the institution.

He also presided over the Maragua Education Endowment Fund at Thaara Primary School.

r Gachagua said Mt Kenya region has wholly benefited from the government's socio-economic development programs besides various posts, the latest being the appointment of Principal Secretaries.

"The region will continue benefiting from Dr Ruto's government. In the forthcoming appointments for ambassadors, you will still benefit. Ruto is a truthful and honest person, and we will consolidate our support for him. Our colleagues in the opposition are welcome to Kenya Kwanza Alliance because they were coerced and intimidated to join Azimio," Gachagua, said.

He stated that with the leaders being united in the government, they will be able to pursue and push for more development projects and improve the residents' economic status and livelihoods.

He spoke in Murang'a county on Friday after commissioning the Sh261 million Murang'a Technical Training Institute.

The DP also asked owners of small-scale enterprises to take advantage of the recently launched Hustler Fund to improve their businesses.

Emphasizing that the aim of the Fund is, among others, to create employment, Mr Gachagua called on the youth to borrow capital from the Fund and start businesses.

At the same time, the DP told off a section of opposition leaders who are inciting the youth to default repayment of the loans advanced by the Fund.

He termed the incitements as retrogressive politics as he advised the youth to be mindful of the progress of the country and to avoid being drawn into divisive politics.

"The Fund is meant to assist and uplift the public. Those getting the loans should repay," he stated.

The host of leaders who accompanied the DP pledged unwavering support for President Ruto and Gachagua, who they said was the regional kingpin.

They lauded his efforts to unite the leaders in the region

Post a comment
WATCH: The latest videos from the Star
by THE STAR REPORTER
News
02 December 2022 - 19:23
Read The E-Paper