Keep off politics or get dismissed, Kindiki tells grassroots officials 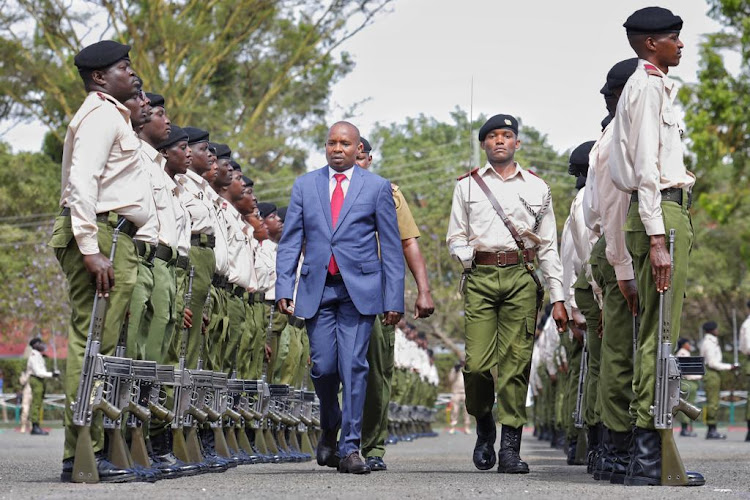 The government has directed officers serving under the national government administration to keep off politics or risk the sack.

Interior Cabinet Secretary Prof Kithure Kindiki said no political assignments will be given to any of its grassroots officials including chiefs, and county and regional commissioners.

Instead, the officers will be expected to focus on oversight of government policies and programmes in their jurisdiction in strict compliance with the prescribed scheme of service.

“We will not expect NGAOs to participate in extraneous activities including politics. The government's policy is to create professional NGAO organs to serve the country impartially, equally, and in accordance with the law,” he said.

Speaking at Embakasi Administration Police Training College during the pass-out parade for 448 assistant county commissioners who underwent paramilitary training, the CS warned administrators against engaging in politics or discrimination in public service.

“Your work is to stick to the delivery of services and to make sure that you don't veer off from your mandate. Our work is to provide services to the people irrespective of their ethnicity, political affiliation, religion, or any other connection,” he said on Friday.

Kindiki said by February next year, every ACCs will be provided with a vehicle to assist in mobility and to ensure they have the means to coordinate security and supervise government programs.

“We want to retain about 200 cars and acquire an equal number in the shortest time possible. We want to ensure that within the next three months, every assistant county commissioner will be provided with transport so that they can be able to deliver services to the people of Kenya.”

So far, 1,397 ACCs have already completed the mandatory training designed to hone their leadership skills.

Kindiki urged the officers to prioritise grassroots coordination and partnerships with other state agencies.

Currently, NGAOs is facilitating the administration of national examinations to pupils in Grade 6 under the CBC programme, learners in Std 8 and Form 4 candidates under the 8-4-4 system.

“This national exercise is continuing and I want to ask security agencies to be vigilant and cooperate with the Ministry of Education to ensure that we deliver successful examinations,” he said.

The ceremony was attended by Inspector General Japheth Koome, his deputy Noor Gabow, and members of the Parliamentary Committee on Security and National Administration Francis Sigei, Dido Rasso, and Peter Kaluma among other senior government officials.