He hinted at demonstrations to protest the removal of the commissioners 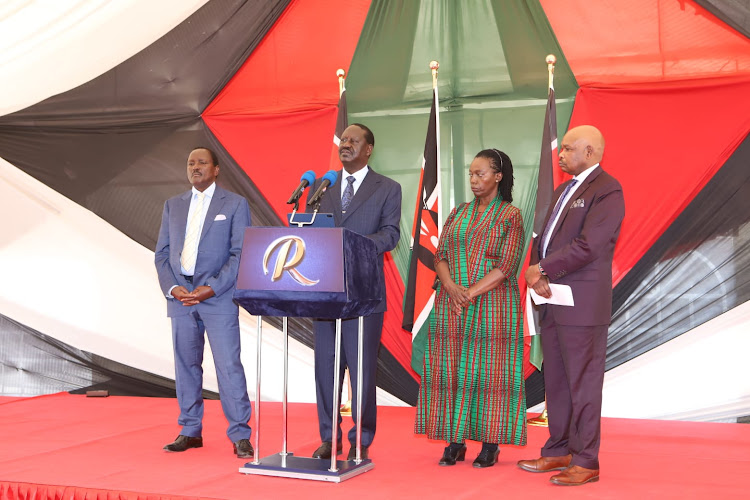 Wiper leader Kalonzo Musyoka has said the move to remove the four IEBC commissioners is politically motivated and instigated.

"The persecution of the four commissioners is very sad. People are following a script," he said.

Kalonzo asked the Justice and legal affairs committee to remain independent and stand out as a different House committee.

Addressing the press on Thursday, the Wiper leader hinted at demonstrations to protest the removal of the commissioners.

"Kenyans would have wanted a peaceful Christmas. Why are they taking us to the streets," Kalonzo said.

Narc Kenya leader Martha Karua also accused the Kenya Kwanza administration of witch-hunt in the removal of the commissioners.

"If we drop our vigilance, we will be in for a rude shock. We may have a ruthless dictator the region has never seen," she said.

Karua accused Ruto of acting outside the law by not putting in place a panel for the selection of IEBC chair, as Wafula Chebukati's term comes to an end.

"He is instead directing his energies to amend the law to put in place a commission that suits him. The three top officials whose term is ending should be on leave," she said.

Azimio spokesman Makau Mutua said the opposition will not allow the removal of the four commissioners.

"We will ask our supporters in the near future to stand with us to stop this," he said.

Mutua further said JLAC lacks jurisdiction to investigate the conduct of the four.

He said the committee cannot interrogate the four basing the arguments on an affidavit sworn by Chebukati.

"The chairman has a script and wants to conclude the process quickly. It is a slaughterhouse being prepared for the four commissioners," Mutua said.

The committee is chaired by Tharaka MP Gitonga Murugara.
News
2 days ago

He said the constitutional threshold for removal is so high.
News
2 days ago

It won't end well for you, Raila warns Ruto

The ODM leader says Kenya is standing on precipice
News
2 days ago
Post a comment
WATCH: The latest videos from the Star
by ALLAN KISIA Political Writer
News
24 November 2022 - 15:25
Read The E-Paper