Kenya to benefit from Sh314bn to end polio

• The country last reported actual cases of wild polio in 2013 when an outbreak in Somalia led to importation of 14 cases to Kenya.

•CEO of Bill & Melinda Gates Foundation, said, "Question is not if it’s possible to eradicate polio — it’s whether we summon will, resources." 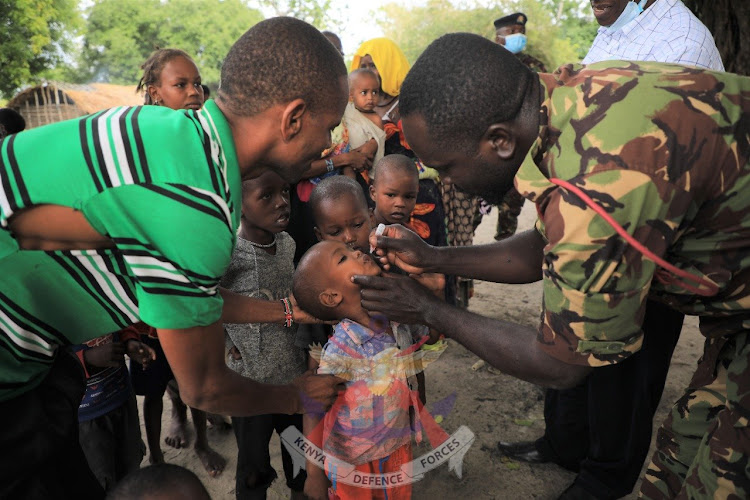 Kenya will benefit from a new round of funding for polio vaccinations.

The pledges were made at the ongoing World Health Summit in Berlin, attended by Kenya’s Ministry of Health officials, among many others.

Kenya's allocation has not yet been specified.

However, the country last reported actual cases of wild polio in 2013 when an outbreak in Somalia led to importation of 14 cases to Kenya.

The World Health Organization said the new funding will help vaccinate 370 million children globally every year over the next five years and continue disease surveillance across 50 countries, including Kenya.

“The new detections of polio this year in previously polio-free countries are a stark reminder that if we do not deliver our goal of ending polio everywhere, it may resurge globally,”  WHO director general Dr Tedros Adhanom Ghebreyesus said.

Wild poliovirus is endemic in just two countries – Pakistan and Afghanistan. However, after just six cases were recorded in 2021, 29 cases have been recorded so far this year, including a small number in Malawi, linked to a strain originating in Pakistan.

Additionally, outbreaks of the vaccine derived poliovirus —variants of virus that can emerge iwhere not enough people have been immunised — continue to spread across parts of Africa, Asia and Europe.

New outbreaks have been detected in the United States, Israel and the United Kingdom in recent months.

Mark Suzman, CEO of Bill & Melinda Gates Foundation, one of the donors, said,  “The question is not whether it’s possible to eradicate polio — it’s whether we can summon the will and the resources to finish the job."

The foundation pledged US$S 1.2 billion, the largest giving by any non-profit.

The pledging moment in Berlin marked the first major opportunity to pledge support toward the US$4.8 billion needed to fully implement the GPEI 2022-2026 Strategy.

The strategy aims to achieve and sustain a polio-free world by cutting outbreak response times, increasing vaccine demand and increasing access in inaccessible areas, among other ways.

"Children deserve to live in a polio-free world, but as we have seen this year with painful clarity, until we reach every community and vaccinate every child, the threat of polio will persist," Unicef executive director Catherine Russell said.

"Unicef is grateful for the generosity of our donors and the pledges made today, which will help us finish the job of eradicating polio.  When we invest in immunisation and health systems, we are investing in a safer, healthier future for everyone, everywhere.”

In addition to the funding for GPEI, more than 3,000 influential scientists, physicians, and public health experts from around the world released an endorsement of the 2022-2026 Strategy.

They called on donors to stay committed to eradication and ensure GPEI is fully funded.

The group points to new tactics , like the continued roll-out of the novel oral polio vaccine type 2 (nOPV2), making them confident of GPEI’s ability to end polio.

Five hundred million doses of nOPV2 have already been administered across 23 countries, and field data continue to show its promise as a tool to more sustainably stop outbreaks of type 2 cVDPV.

Has your baby been screened and received these vaccines?

12 months since Kenya reported a case of vaccine-derived polio.
News
4 months ago

There is no cure, but vaccination brought the world close to ending the wild form of the disease.
News
8 months ago

The nOPV2 is considered the best weapon against vaccine-derived poliovirus
News
1 year ago
Post a comment
WATCH: The latest videos from the Star
by JOHN MUCHANGI Science Editor
News
21 October 2022 - 05:00
Read The E-Paper