97 per cent of Kenyans with locally advanced cancers and other illness go to India for cancer treatment.

•Kenya signed a Memorandum of Understanding (MOU) between Apollo Hospitals Enterprise of India and Kenya’s Balmer Healthcare in August 2022. 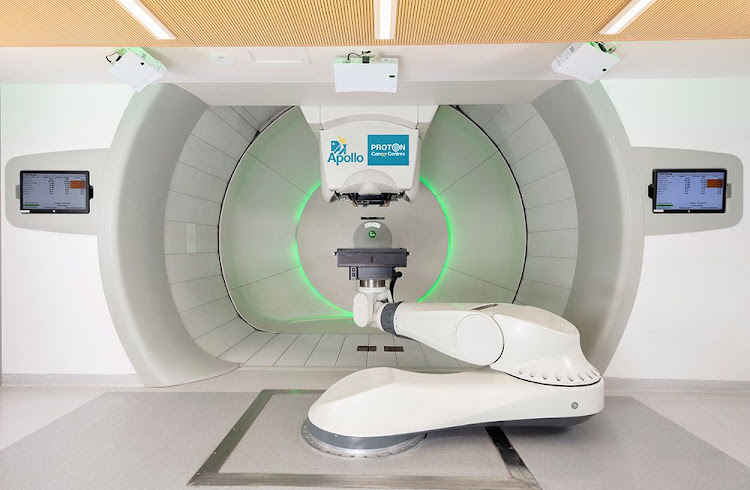 Proton therapy machine at a hospital in India.
Image: proton.apollohospitals

Kenyans can now access the latest technology in the treatment of cancer at the newly established Apollo Proton Cancer centre.

The centre is the first and only Proton centre in South Asia, the Middle East and Africa.

Apollo Hospitals which has more than 70 hospitals across India is the number one destination for Kenyan patients seeking treatment in India.

The facility has proton therapy centres in South Asia, the Middle East, and now in Africa.

According to the 2015-2020 Ministry of Health report on medical tourism, 97 per cent of Kenyans with locally advanced cancers go to India for cancer treatment.

Many prefer India because it offers some of the best medical treatment in the world and treatment is affordable and of high quality.

In August 2022, the Kenyan government stepped up its response to cancer treatment by signing a Memorandum of Understanding (MOU) between Apollo Hospitals Enterprise and Kenya’s Balmer Healthcare.

According to the Acting Indian High Commissioner to Kenya Rohit Vadhwana, the MOU will give access to Kenyans better and more advanced technology treatment, improved medical investigations, diagnosis, and treatment of diseases that were once considered not treatable.

According to Globocan 2020, an online database providing global cancer statistics, Kenya has approximately 42,000 new cancer cases and 27,000 deaths every year.

The number of prevalent cases over 5 years stands at about 82,000.

Why Proton therapy treatment for cancer?

According to Dr Srinivas Chilukuri, Senior Consultant, Radiation Oncology at the Apollo Proton Cancer Center, patients undergoing proton therapy have significantly less discomfort during and after treatment and are less likely to require hospital admission, tube feeding, or treatment interruptions.

Chilukuri says, unlike traditional treatment, protons deliver their energy but do not damage healthy tissues compared to other types of cancer treatment making it a game changer.

“Unlike traditional radiation therapy which uses x-rays,  this new cancer treatment uses a beam of protons that is very targeted, precise, and painless. It destroys the DNA of cancer cells, killing them and preventing them from multiplying,” Chilukuri says.

According to Chilukuri, the therapy has significant promise for treating tumours in very young children and may reduce radiation exposure to healthy tissue.

Chilukuri says the treatment is less toxic, reducing the probability and/or severity of short and long-term side effects on surrounding healthy tissues and organs while ensuring patients have better outcomes.

“It is favourable in treating recurrent tumours, even in patients who have already received radiation,” he said.

Chilukuri said Proton therapy in select patients may improve survival since it reduces the immediate and long-term side effects of treatment.

This leads to not just improvement in survival but also survivorship.

“Survivorship can be described as the ability of a patient to survive without losing the quality of life. It has been proven to be successful in curing or controlling many cancers when used appropriately.”

The advanced pencil beam technology steers protons to the cancer, with virtually no exit dose, allowing tissues and vital organs to be spared.

Proton therapy, also called proton beam therapy, is a type of radiation therapy that uses protons rather than x-rays to treat cancer.

Instead of using x-rays like regular radiation treatment, it uses protons to send beams of high energy that can target tumours more precisely than X-ray radiation.

“I had 25 sessions of the proton beam therapy and it was very quick, painless, and I had very few symptoms. The technology is unbelievable! It was so quick, each session is about one minute and 20 seconds after which they moved me to a robotic arm on the bed and then targeted the tumour from a different angle. I’m just very thankful,” he said.

The cost of cancer therapy varies with the type of cancer. For patients on chemotherapy alone, it could cost them an average of Sh138,207 while for those treated with surgery, it costs an average of Sh128,207 and for those on radiotherapy, they will part with Sh119,036.

However, there was no difference in how long the patients lived.

Traditional radiation delivers x-rays, or beams of photons, to the tumor and beyond it. This can damage nearby healthy tissues and can cause significant side effects.

By contrast, proton therapy delivers a beam of proton particles that stops at the tumor, so it is less likely to damage nearby healthy tissues.

Some experts believe that proton therapy is safer than traditional radiation, but there is limited research comparing the two treatments.

Are you experiencing excessive farting? Here is why

The average person farts between 10 and 20 times per day.
Health
1 month ago

Food cravings? No your body may just be dehydrated

Thirst is often confused with hunger or food cravings.
Sasa
1 month ago
Post a comment
WATCH: The latest videos from the Star
by MARGARET WANJIRU Health & Lifestyle Journalist
News
12 October 2022 - 15:45
Read The E-Paper