Mutura locked out of Nairobi speaker race, battle narrows down to two

24 people had collected forms to contest for the seat.

• As announced by the County Assembly Clerk Edward Gichana on Wednesday, only Kennedy Ng’ondi and Hassan Robow fully met the requirements as per the gazette notice.

• Arthur Ndung’u and Samuel Masaki did not also submit their certificates of good conduct instead, they attached receipts for the payments

Waithaka MCA-elect Anthony Kiragu said Kenya Kwanza MCAs will block the swearing-in process on Thursday after Benson Mutura was locked out of the Nairobi speaker race. 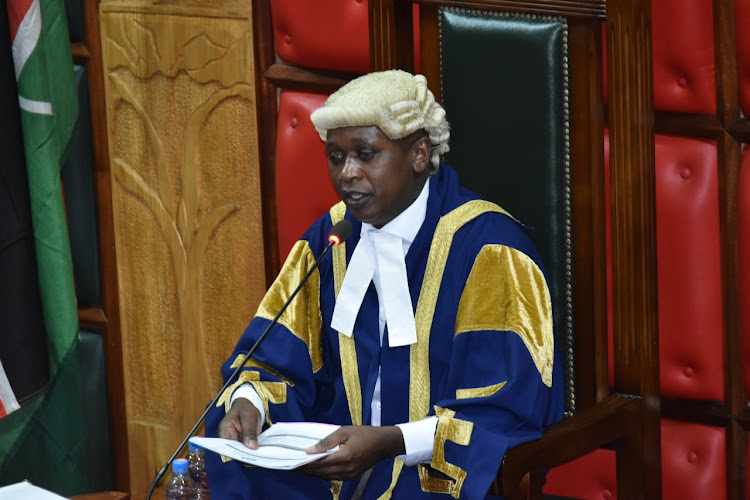 Speaker of the County Assembly of Nairobi Benson Mutura presiding over plenary session on October 26, 2021 at the chambers
Image: FILE

Only two candidates are in the race for the Nairobi speaker’s seat.

24 people had collected forms to contest for the seat with only nine returning them for consideration.

Elections for the seat will be held Thursday.

As announced by the County Assembly Clerk Edward Gichana on Wednesday, only Kennedy Ng’ondi and Hassan Robow fully met the requirements as per the gazette notice.

Surprisingly, Nairobi County Assembly Speaker Benson Mutura has been kicked out of the race for failing to submit a certificate of good conduct.

According to the clerk, the Assembly’s technical committee, Mutura and seven others did not meet the set requirements.

Others who were locked out include Brian Mutie, Ahmed Subanea, Arthur Ndung’u, Samuel Mokua, Ooko Okello and Charles Kio.

"The application forms for Hon Benson Kang'ara Mutura were not accompanied by current certificate of good conduct but a payment receipt of the certificate was attached. He did not submit a tax compliance certificate from Kenya Revenue Authority (KRA)," the letter by Gichana reads.

Gichana also said the technical committee would not allow anyone else to modify their applications because of time constraints.

"In light of observation by the committee and in order to conduct further due diligence on the eligibility of the candidates, I wrote to the Independent Electoral and Boundaries Commission, Kenya Revenue Authority (KRA) and the Directorate of Criminal Investigation seeking the clearance status of all persons who returned their nomination papers. Unfortunately, the instructions did not respond to my inquiries within the set timelines," added Gichana.

As a result, a section of Kenya Kwanza affiliated MCAs protested Mutura’s removal from the race accusing the clerk of breaking the law.

Led by Waithaka MCA-elect Anthony Kiragu, the legislators have vowed to block the swearing-in ceremony if their preferred candidates are not allowed to contest

"We want to promise that there will be no swearing-in ceremony and any other activity if this illegality is allowed to go on,” Kiragu said.

He claimed that the technical committee had their “favourable” candidate arguing that the process of shortlisting lacked transparency.

According to Clerk Gichana, Brian Mutie’s application was not accompanied by the nomination papers.

Ahmed Dubon submitted an application form but failed to submit a certificate of good conduct and requisite to MCAs supporting his candidature.

Arthur Ndung’u and Samuel Masaki did not also submit their certificates of good conduct instead, they attached receipts for the payments

Ooko Okello failed to submit a certificate of good conduct while Kio did not attach his curriculum vitae.

Azimio la Umoja One Coalition candidate, Ng’ondi will now face off with Robow for the seat.

Ng’ondi was previously MCA for Kware ward and also served as the county Deputy Speaker during the late Alex Magelo’s tenure from 2013- 2017.

Robow, with a UDA ticket, recently vied for the Kamukunji Parliamentary seat but lost to Jubilee’s Yussuf Hassan.

He served as a city councillor in Eastleigh North between 2007 and 2013.

Robow went to Mandera, where he won the ward representative race on the URP ticket and served as the county assembly’s majority leader between 2013 and 2017.

By law, the election of the speaker is supposed to take place immediately after the MCAs are sworn in.

The standing orders also state that there would only be two items in the order paper on the first sitting — the election of the speaker and swearing-in of members.

Besides being the spokesperson of the assembly, the speaker ensures the dignity of the assembly is upheld and disciplines MCAs for misconduct, among others.

Says they are rooting for former senator Mithika Linturi to be appointed to the Cabinet.
Counties
2 months ago

The former speaker said he has been close friends with Uhuru for 25 years
News
2 months ago
Post a comment
WATCH: The latest videos from the Star
by MAUREEN KINYANJUI News Reporter
News
28 September 2022 - 18:14
Read The E-Paper