The two Iranians were arrested in 2012, when they travelled to Kenya as tourists.

• They were sentenced to 15 years for being in possession of explosives. The sentence was to end on May 6, 2023, officials said.

• Their lawyer Ahmednasir Abdullahi did not respond to our calls on the same. He had fought for their release throughout. 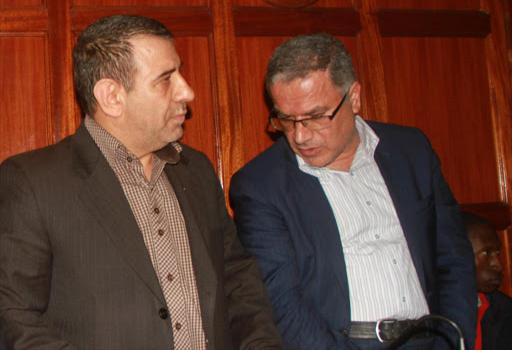 Terror suspects Moses Keya Mmboga, abdolhosain Gholi safaee, Sayed Nasrollan Ebrahimi at a Milimani law court where they were arraigned in court with Terror related charges. The three who were arrested while taking video clips of the Israel Embassy in Nairobi where detained until 6th of december when their Bail application will be heard. Photo/Monicah Mwangi

Mystery surrounds the release of two high-profile Iranians who had been jailed for 15 years over claims of terrorism.

Ahmed Aboulfathi Mohamad and Sayed Mansour Mousavi left the country on September 9, 2022, under cloud of confusion prompted by the transition in government.

They were sentenced to 15 years for being in possession of explosives. The sentence was to end on May 6, 2023, officials said.

Commissioner General of prisons Brig (Rtd) John Warioba confirmed the two were released and repatriated to their country.

He said through his spokesman George Dianga that the two had petitioned their sentence through the Power of Mercy Advisory Committee which allowed the early release procedurally.

“They were legally discharged and handed over to other agencies that ensured they were repatriated to their country as ordered by the court,” he said.

He said the two were supposed to be freed next year in May after their sentences were reduced from life to 15 years.

However, the sentence was later reduced in an internal calculation that is applied to prisoners.

“The sentence was reduced after they petitioned the committee, and it was later divided to three which was reduced to five. It was in order as far as we are concerned.”

He denied there were elements of graft in the release.

“Not true. They were legally released.”

Other government officials said the release of the two was abrupt and fear there might be retaliation from the affected parties.

“We were all surprised. We fear they may hit back out of anger of their jailing,” said a senior government official.

For the convicts, it was a joy for them to be released and sent back to their country safely.

Their lawyer Ahmednasir Abdullahi did not respond to our calls on the same. He had fought for their release throughout.

Sources aware of the developments said the two were removed from Kamiti Maximum Prisons on September 9 on the pretext they were to attend a court session and did not return there as anticipated.

Two officers from the Kamiti prisons are said to have escorted them from the facility and to Iran.

Even though other officers said the two colleagues are out of the country for a workshop, others said they went to Iran for the mission.

It is claimed the two left the country to Iran directly aboard a special jet. It is not clear who was behind the move.

Mohamed and Mousavi were arrested in June 2012 and charged with possessing 15 kilograms (33 pounds) of the powerful explosive RDX.

They were initially sentenced to life imprisonment but in 2016, a judge reduced the life sentences given to the two Iranians convicted of planning bomb attacks to 15 years.

Government officials said when the two were arrested in Mombasa they may have had links to the Quds Force, the elite extra-territorial special forces arm of Iran’s Revolutionary Guards.

The two Iranians were arrested in 2012 when they travelled to Kenya as tourists.

The drama surrounding their arrest and conviction sparked a diplomatic brawl between Kenya and Iran.

Iran recalled its ambassador to Kenya because of a court decision upholding sentences for two Iranians in jail, then foreign ministry spokesman Bahram Qassemi said.

Iran also lodged a formal complaint with the Kenyan ambassador in Tehran because of the Kenyan court's decision in the case.

Further, Iran’s ambassador to Kenya was put under criminal investigation over a plot to free the two terror suspects from police custody.

Then ambassador Hadi Farajvand was suspected of looking for high-level contacts in government to help him release the Iranian nationals.

They were in 2017 released after three judges appealed that sentence, but the appeal was challenged in the Supreme Court.

Authorities decided to hold the suspect until a final verdict. Police believe it’s the long-winded process in the Kenyan courts that led the Iranian diplomat to seek other ways to ensure the two citizens' release.

Police arrested one Wesley Kiptanui Kipkemoi and Shemgrant Agyei, for allegedly defrauding the ambassador of an unknown amount of money by claiming to be Interior Ministry officials who could help him.

The ambassador was seen on CCTV walking into a travel agency to book tickets for the detainees after striking the deal with the fraudsters. He then cancelled them when he realised the plan.

Iran's Quds are accused of supporting terrorist organisations and of seeking to destabilise countries in the wider region.

Most recently, the US and GCC members have imposed sanctions on senior members for trying to undermine the western-backed Afghan government.

The court said the two be repatriated back to Iran on completion of the sentence.

The court said it is the two Iranians who led the police to where the explosives had been planted and that it was only, they who could have planted the same.

Evidence on record showed that they visited the spot at Mombasa golf course thrice, the last time being a day before they were arrested.

They want to be allowed to access medical services at Aga Khan University Hospital.
News
2 years ago

DPP accused an Iranian diplomat of planning an escape plan for the suspects.
News
3 years ago
Post a comment
WATCH: The latest videos from the Star
by CYRUS OMBATI Chief Crime Reporter
News
22 September 2022 - 19:52
Read The E-Paper