A women alliance wants the effects of Covid-19 on women and child health addressed.

• During their breakfast to be held alongside UNGA on September 22, the alliance seeks to highlight the need for urgent, targeted investment in programmes and policies.

• This is to tackle the devastating social and economic impact of these crises on the health and well-being of vulnerable women, children and adolescents. 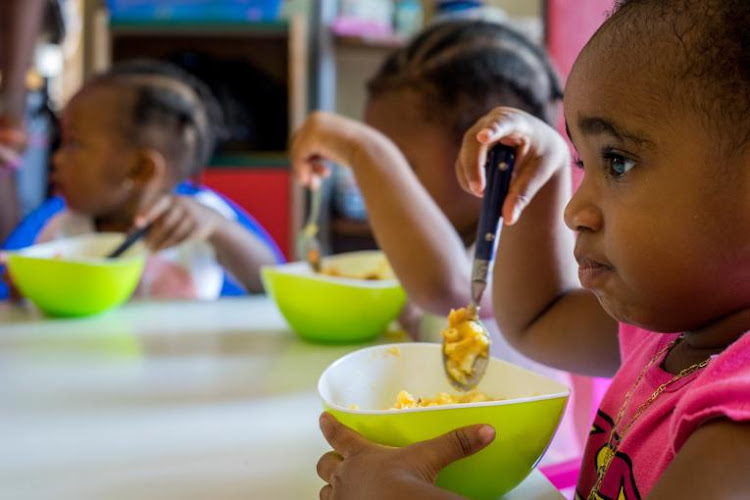 PROPER NUTRITION: Children eat their lunchtime meal at a centre in a file photo.
Image: UNICEF

Leaders attending the 77th United Nations General Assembly in New York have been asked to prioritise the improvement of vital health services for women, children and adolescents.

The Partnership for Maternal, Newborn & Child Health (PMNCH) has told leaders to focus on the devastating social and economic impact that Covid-19, conflict and climate change has had on the health and well-being of vulnerable women, children and adolescents.

PMNCH said Covid-19 has led to a hike in food prices and overall, increased the cost-of living in many countries.

"It is essential for citizens to be heard at the highest levels of government and leadership. Leaders need to understand what people want, and to play their part as champions in creating robust and responsive health systems and communities,” PMNCH Board Chair Helen Clark said.

She said PMNCH intends to highlight the need for urgent, targeted investment in programmes and policies to address the above issues during their breakfast meeting to be held on the sidelines of the UNGA on September 22.

During the meeting, delegates will explore key issues affecting women, children and adolescents.

“It is clearer now than ever that collaboration is key to improving accountability,” Clark said.

Every Woman Every Child Latin America and Caribbean (EWEC-LAC), a partner member of the PMNCH, is expected to share findings from its new report dubbed "No Time to Lose: Health Challenges for Adolescents in Latin America and the Caribbean".

The report identifies adolescents as a population in transition and in need of timely support before adulthood.

It cites pregnancy, sexual health, substance use and school completion as the challenges that often determine the future of those at this stage of life.

It's however notable to mention that concerted global efforts over the past two decades have led to improved lives for millions of women, children and adolescents.

However, data from the World Health Organization (WHO) and UNICEF shows that in 2021 alone, 25 million children did not receive basic vaccines.

The report further indicates that in 2022, some 274 million people will bee in need humanitarian aid and protection, a significant increase from 235 million people a year ago.

The EWEC-LAC report finds that although LAC countries have made great strides in recent decades to improve health systems, inequalities still exist.

It says despite the introduction of more progressive sexual and reproductive health and rights policies and gains in service delivery, 24 million women in LAC have an unmet need for modern contraception.

The report says the adolescent birth rate is the second highest in the world, after sub-Saharan Africa.

"Children and teens across our region are at risk of becoming the generation that missed out on the health, education and economic opportunities that they needed to reach their fullest potential,” Carissa Etienne, Director of the Pan American Health Organisation said.

Delegates at the PMNCH Accountability Breakfast on 22 September will call on governments to take immediate action.

"I am calling for more accountability and more proof that women, children and adolescents are the priority of governments and organisations," former President of Estonia, Kersti Kaljulaid, said.