UDA won the chairperson and whip positions of the council 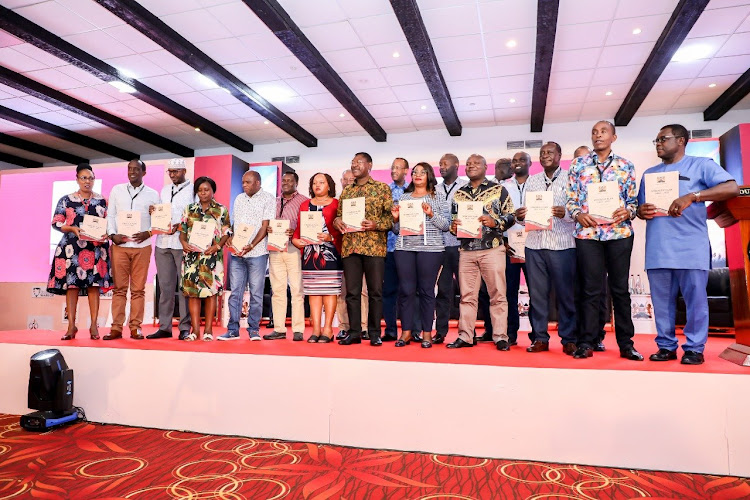 The Kenya Kwanza Alliance outmaneuvered the Azimio la Umoja Coalition to control the leadership of the Council of Governors.

The COG is a non-partisan organisation established under Section 19 of the Inter-Governmental Relations Act 2012, comprising of the 47 governors.

Kenya Kwanza won two out of the three coveted positions at the COG; the chairperson, vice-chair and whip.

Kajiado Governor Joseph Ole Lenku who had been fronted by the ODM leadership to vie for the chairperson position under Azimio, lost to Waiguru.

However, the ODM party won the vice-chair seat through Wajir Governor Ahmed Abdullahi.

President William Ruto and Azimio leader Raila Odinga were fighting to control the leadership of the Council of Governors.

According to the COG Secretariat, the 47 governors unanimously settled on the new leadership through a consensus.

"I want to confirm the process of electing the national leadership of the Council of Governors was smooth. All governors agreed, through a consensus, on the new leadership," COG chief executive officer Mary Mwiti said.

The three new leaders were unveiled on Saturday afternoon in an event graced by National Assembly Speaker Moses Wetang'ula, who was representing President William Ruto.

Waiguru who becomes the first woman to be elected chairperson of the Council of Governors takes over from former Embu Governor Martin Wambora.

In her acceptance speech, Waiguru said she is ready to serve as COG chair for the next year.

“I’m humbled to be entrusted with the role at this critical time when we usher in the third generation of county governments. The responsibility bestowed upon me is huge, but I’m equal to the task,” Waiguru said.

She is now the chairperson of the 26 new governors, 11 governors serving their second term in office and eight pioneer governors who were re-elected after staying in the cold for five years.

Abdullahi said the tradition of picking leaders based on consensus is commendable.

“Sometimes it is tough consensus, but we want to keep it that way. The Council of Governors in a bipartisan forum that works for the interest of all counties,” he said.

The governor said as the new leadership they will do everything possible to remain to the ideals of the Council of Governors and enhance devolution.

Out of the 18 CoG committees, the Kenya Kwanza brigade took home 10 chairperson positions while Azimio Coalition party took seven seats. One seat was taken by an independent governor.

Kiambu’s Kimani Wamatangi (UDA) will be in charge of Roads, Transport and Energy committee while Embu Governor Cecily Mbarire (UDA) has been tasked to chair the Resource Mobilisation committee.

Elgeyo Marakwet Governor Wesley Rotich (UDA) will be in charge of ICT and Narok’s Patrick Ole Ntutu (UDA) will chair the Tourism and Wildlife committee.

On the Azimio side, Kakamega Governor Fernandes Barasa (ODM) will chair the Finance committee while Kisumu’s Anyang Nyong’o (ODM) will be in charge of Lands.

Tana River’s Dhadho Godana (ODM) will be in charge of Security and Foreign Affairs committee.

Sakaja will be the chair of the Human Resource, Labor and Social welfare committee.
News
2 months ago

He said major area of dissatisfaction in the counties is the delay in transferring all the devolved functions.
News
2 months ago

She will be deputised by Wajir Governor Ahmed Abdullahi.
News
2 months ago
Post a comment
WATCH: The latest videos from the Star
by CHARLES MGHENYI Chief Correspondent, Coast Region
News
18 September 2022 - 23:00
Read The E-Paper