He said he wishes him the very best as he takes over the country's leadership.

• Uhuru took the opportunity to remind Ruto that he will be a leader to all Kenyans; those who voted for him and those who did not, alike.

• He further wished Ruto success, adding that his success extended to that of all Kenyans. 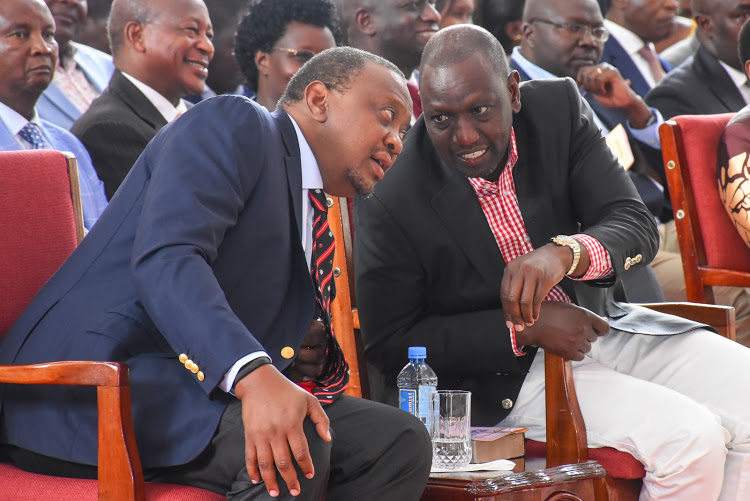 President Uhuru Kenyatta and President-elect William Ruto at a past function.
Image: PSCU

Uhuru extended the congratulatory message to his successor during his farewell speech at State House, Nairobi.

"My entire family and I join all Kenyans in wishing the very best to our next President Dr William Samoei Ruto and extend to him our warmest congratulations in receiving the mandate of Kenyans to lead us as our fifth President," he said.

Uhuru took the opportunity to remind Ruto that he will be a leader to all Kenyans irrespective of whether they voted for him or not.

He further wished Ruto success adding that his success will be shared by all Kenyans.

"In the prophetic words of our National Anthem, we are summoned to purposefully dwell in unity, peace and liberty, working hard and together so that plenty may be found within our borders," Uhuru said.

Ruto will be sworn-in as the fifth President of the Republic of Kenya on Tuesday at the Moi International Sports Center, Kasarani.

All presidents from the East African Community are expected to attend the swearing-in ceremony at the 60,000-seat stadium.

Ruto: Unfortunately, Uhuru has refused to congratulate me

"Maybe he's a bit disillusioned or maybe he's unhappy that I defeated his candidate."
News
4 months ago

Ruto visits Uhuru at State House ahead of Tuesday's inauguration

It was the first time the leaders were meeting in months.
News
4 months ago
Post a comment
WATCH: The latest videos from the Star
by SHARON MWENDE
News
12 September 2022 - 18:24
Read The E-Paper