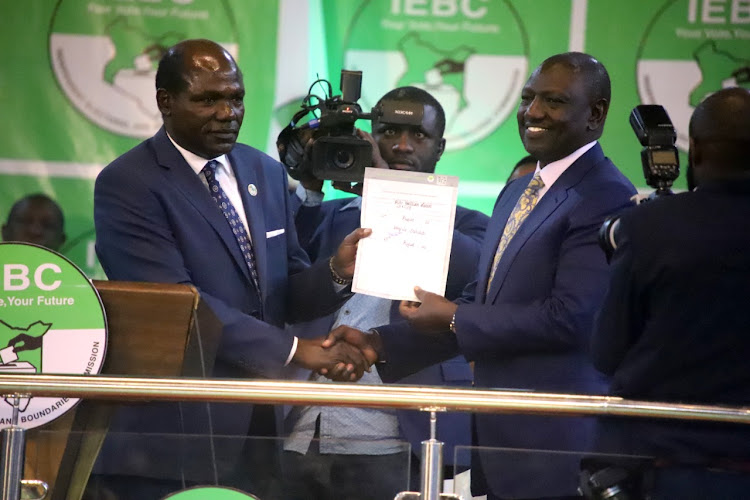 President-elect William Ruto has pledged to build a united country once he takes over the mantle of leadership.

Speaking shortly after being declared the winner at the Bomas of Kenya, Ruto said the differences that have occurred during the campaign period is now a water under the bridge.

He assured Kenyans that he will bring on board all Kenyans regardless of who they voted for in the August 9, polls.

Ruto said there is a need to forget the past and walk into the future with hope to make lives of Kenyans better.

Ruto, the self-styled "Hustler in Chief," broke what has been called the "curse" of the deputy presidency — no deputy president in Kenya has ever succeeded his president. He was the United Democratic Alliance's candidate and heads the Kenya Kwanza alliance.

The Independent Electoral and Boundaries Commission announced the 55-year-old Kenya Kwanza leader. He needed 50 per cent plus one of the countrywide tally plus one, and 25 per cent of the votes in at least 24 counties.

Ruto garnered 7,176,141 votes representing 50.49 percent of the final vote, while Raila received 6,942,930 votes this 48.85 percent, as announced by IEBC chairman Wafula Chebukati at the Bomas of Kenya national tallying centre.

He defeated 77-year-old Raila Odinga, once a fiery and  iconic opposition leader who has lost, counting this election, five times.

The Deputy President managed to get a majority votes from the critical, vote-rich Mt Kenya region, leading in most counties.

"Chebukati is our hero. Soft spoken but firm," Ruto said.
News
3 months ago
Post a comment
WATCH: The latest videos from the Star
by THE STAR REPORTER
News
15 August 2022 - 18:45
Read The E-Paper