Uhuru goes bare-knuckle on Ruto, calls him master of lies

"Imagine a whole leader stands up and lies to Kenyans in broad daylight."

•Ruto said the transfer of port operations took place after the March 9, 2018 Handshake between Uhuru and Raila.

•“Imagine a whole leader stands up and says look at this people they have taken railways to Naivasha… they have done this to the port and by that time people are cheering him on,” he said. 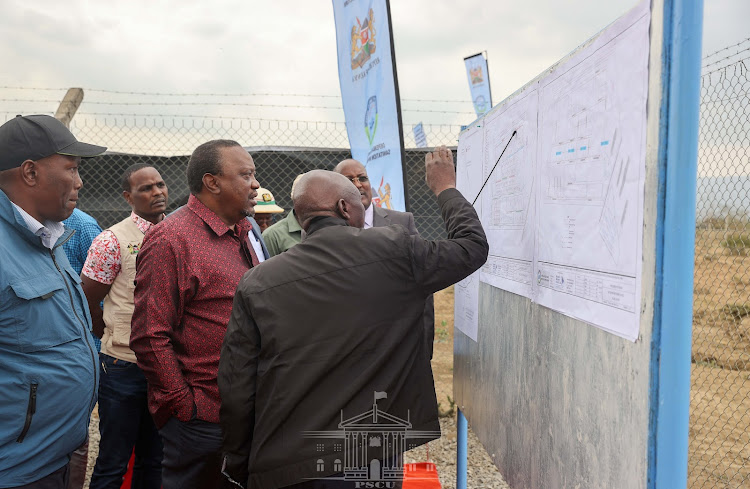 President Uhuru Kenyatta has hit out at DP William Ruto over remarks about Mombasa port and the railway line to Naivasha.

Ruto has for the umpteenth time blamed Uhuru and ODM leader Raila Odinga for the transfer of port services from Mombasa to Nairobi and Naivasha.

Ruto said the transfer of port operations took place after the March 9, 2018 Handshake between Uhuru and Raila.

But speaking in Naivasha on Tuesday, Uhuru said Ruto should stop lying to Kenyans in broad daylight.

“Imagine a whole leader stands up and says look at these people they have taken railways to Naivasha… they have done this to the port and at that time people are cheering him on,” he said.

Uhuru said they chose Naivasha because of the geothermal energy that grants Kenya cheap power &and its strategic location.

“Do you think I can carry the lake and bring it to Naivasha? Or there is anyone who has the means to bring it. Here apart from God?”

Speaking during the commissioning of the SGR-MGR Rail link at Mai Mahiu, Uhuru said he brought the railway to allow those who would not do business to have ease of transactions.

Last month, Ruto warned all the illegal beneficiaries of port business, saying he will revoke their licences if elected president.

Both Ruto and Raila have pledged to revert port operations as the region is said to have lost more than 7,000 direct jobs due to the 2018 directive by the national government that all transit cargo should be cleared in Nairobi or Naivasha.

During his tour to Mombasa on May 14, Raila pledged to return port services within 100 days.

However, Ruto lashed out at Raila, saying he has been the main advisor to the President for the past four years, but failed miserably.

“The ‘handshake’ government is responsible for the transfer of port operations from Mombasa to Nairobi. The same people who were behind it are now going around the country blaming it on me," Ruto said.

DP Ruto said the Standard Gauge Railway project was hijacked by a few selfish individuals, who wanted to benefit at the expense of innocent Kenyans.

Uhuru will get Sh34 million one off payment and Sh1.2 million monthly pension
News
4 months ago