The coalition noted that having the candidates on the same platform would be a bad idea.

•Prof Mutua said, instead Raila Odinga and his running mate Martha Karua plan to hold a televised town hall to explain to Kenyans the Azimio agenda.

•The coalition noted that having the candidates- DP William Ruto and Raila- on the same platform this year would be a bad idea. 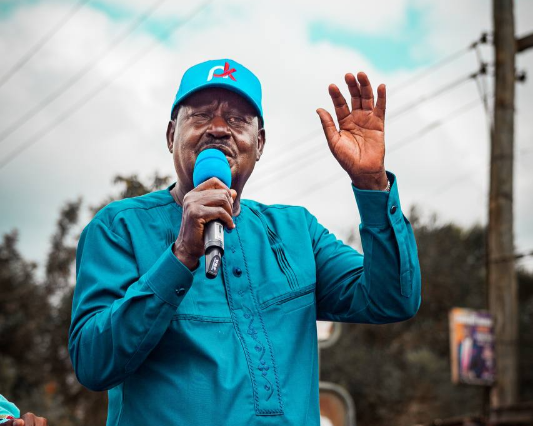 Azimio presidential candidate Raila Odinga has hinted that he might not attend the presidential debate scheduled for Tuesday.

In a statement by his spokesman Makau Mutua, the coalition noted that having the candidates- DP William Ruto and Raila- on the same platform this year would be a bad idea.

“That is why we do not intend to share a national podium with a person who lacks decency. As is well known, our opponent traversed the country hurling epithets at us and other key national leaders, including vile, sexists attack.”

Prof Mutua said, instead Raila Odinga and his running mate Martha Karua plan to hold a televised town hall to explain to Kenyans the Azimio agenda.

"We plan to take part in a televised town hall at Jericho Social Hall in Nairobi's Eastlands with ordinary Kenyans to offer our solutions to the challenges facing the country and common people," he said.

Raila's allies had on Friday issued conditions for his appearance at the planned presidential debate with UDA’s Ruto next week.

They said the former Prime Minister will only attend the debate if key issues including integrity will be discussed.

“There are some people who are saying that we do a debate between Baba and Ruto. Is that possible?” Azimio secretary general Junet Mohamed asked.

“Baba will only attend that debate, and that is my opinion if they will talk about three issues only,” he added.

Junet, a close ally of Raila, divulged that the ODM boss will only attend the event if he is assured they will talk about integrity, corruption and governance.

“If we are going to talk about meaningless things the way we saw with Rigathi Gachagua, me as the secretary general of Azimio, I will send Babu Owino to deal with William Ruto,” he said.

Junet spoke during Azimio campaigns in Western on Friday.

The Presidential debate will be held at the Catholic University for Eastern Africa (CUEA) from 5 pm to 10 pm.

Five renowned journalists have been selected to host the debate.

Babu Owino: I'm ready to debate Ruto only if he doesn't lie

Raila last month confirmed he will attend the debate.
News
4 months ago

Junet Mohamed: We might send Babu Owino to debate Ruto

The presidential debate is scheduled to take place on July, 26.
News
4 months ago

How to participate in upcoming Presidential Debate

The moderators will select the questions and shall not share the same with the candidates.
News
4 months ago