Kenya has increasingly deepened ties with China, whose companies have helped build major projects in the country through Public Private Partnerships.

• The executive director of the China-Africa Centre at Africa Policy Institute in Kenya Dennis Munene said the GDI will play a major role in helping Kenya achieve its Vision 2030.

• This, he said, is to avoid having overlapping projects or functionalities that may be duplicates thus rendering minimal value for money invested in some of the projects. 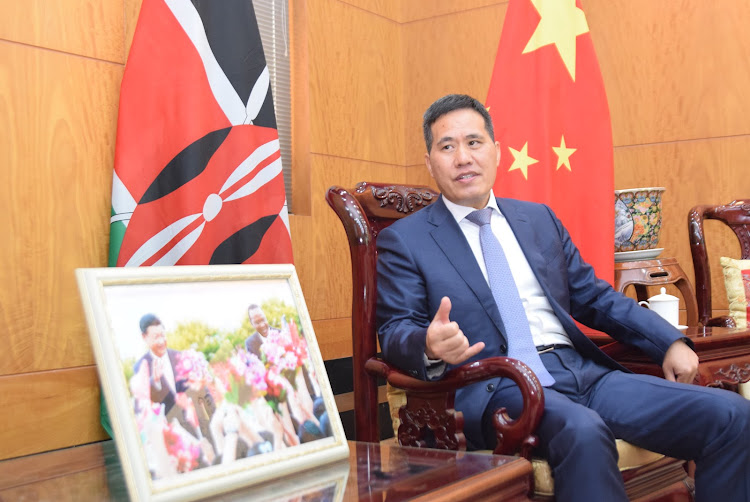 China Ambassador to Kenya Zhou Pingjian during an interview with the Star at the Chinese Embassy in Nairobi on February 25
Image: FILE

Kenya, like other African countries enjoying close relations with China, can benefit more and attain faster industrial growth and sustainable development if it takes advantage of the cooperation to develop rural areas.

According to Zhang Qian, an associate research fellow of the Institute of Sociology at the Chinese Academy of Social Sciences, the cooperation between China and most of the African countries has so far failed to stimulate rural development.

“Not enough research has been done for rural areas. Therefore, we don’t know how the challenges are or how to tackle them,” Qian said.

She spoke at the 11th meeting of the China-Africa Think Tanks Forum organised by the China Africa Institute at the Chinese Academy of History in Beijing, China.

The two-day forum, which ended on Friday brought together participants from more than 10 African countries and China, including two Kenyans, under the theme of “Promoting the spirit if China-Africa friendship and cooperation with joint action on the Global Development Initiative (GDI)”.

The GDI, launched in September 2021, is an initiative spearheaded by the Chinese government to raise awareness of the challenges threatening the delivery of the Sustainable Development Goals and to re-prioritise and renew global commitments to these goals.

Kenya has increasingly deepened ties with China, whose companies have helped build major projects in the country through Public Private Partnerships.

According to tradingeconomics.com, Kenya imported goods worth USD4.03 billion (about Sh510.3 billion) from China in 2021, with machinery, nuclear reactors and boilers taking the lions share (USD718.16 million, Sh85.23 billion) in 2021.

The latest mega project in Kenya built by a Chinese company is the Sh89 billion, 26.9km Nairobi Expressway, which was opened on May 14, and is aimed at decongesting Nairobi.

Apart from the projects, Kenya has also benefited from technological transfer.

For instance, before the construction of the Nairobi Expressway used a technology that was mostly theoretical in the country.

“We are using them as teaching laboratories. We are teaching them in universities but there is hardly any person in Kenya producing pre-stress concrete,” Maringa said in an interview with CGTN.

But the expressway, built by China Road and Bridges Corporation, and the Sh350 billion SGR project, also built by the same company, are projects in urban areas.

The rural areas in Kenya, where most road and rail networks are still underdeveloped, would do with an injection of more projects through the PPPs, where Chinese firms are more willing to partner with the government.

The Lamu port project, built by the China Communication Construction Company, is an example of how a project can open up a rural area.

Lamu county in the Coastal region of Kenya, can be considered a rural county because of underdevelopment.

President Uhuru Kenyatta in response to critics of the China-Kenya relationship in January used the Nairobi expressway and the Lamu port projects to show that the relationship is indeed beneficial to Kenya, contrary to critics.

The Lamu port necessitated the construction of more than 100km of roads that has opened up Lamu to investment and other business opportunities.

The Lamu port, which has operationaliSed three of its intended 24 berths, puts Kenya on the road to becoming the East and Central Africa’s major trade hub.

“Our partnership with China is one that is mutually beneficial, that is based on win-win. And we are very grateful to the Chinese government and to the Chinese people for the support that they continue to render not only to our country but also to the rest of Africa,” Uhuru said.

South-South Dialogues executive director Stephen Ndegwa, who attended the forum virtually, said it is up to African leaders and experts to reach out and get the best value for money from their cooperation with China.

He, however, said China and Chinese companies have to increase their funding for projects in Kenya and other African countries, especially in the rural areas.

The executive director of the China-Africa Centre at Africa Policy Institute in Kenya Dennis Munene said the GDI will play a major role in helping Kenya achieve its Vision 2030.

He said Kenya, like many other African countries, has embraced the GDI as a way of reducing poverty, increasing food security, and working towards achieving the African Union’s Agenda 2063.

He, however, said China must now focus more on helping Kenya and other African countries achieve peace and security, which is prerequisite for development.

“The road is still long and there is still a lot things to be done,” Munene added.

He also proposed the establishment of a working group and a steering committee to provide a monitoring framework for the assistance that China gives to Africa countries.

This, he said, is to avoid having overlapping projects or functionalities that may be duplicates thus rendering minimal value for money invested in some of the projects.