• The award also known as Honoris causa, was given to Pratt during the 51st university's graduation ceremony on Friday.

• The university awarded her the degree in recognition of her passion, commitment, and distinguished service to People Living with Disabilities (PWDs). 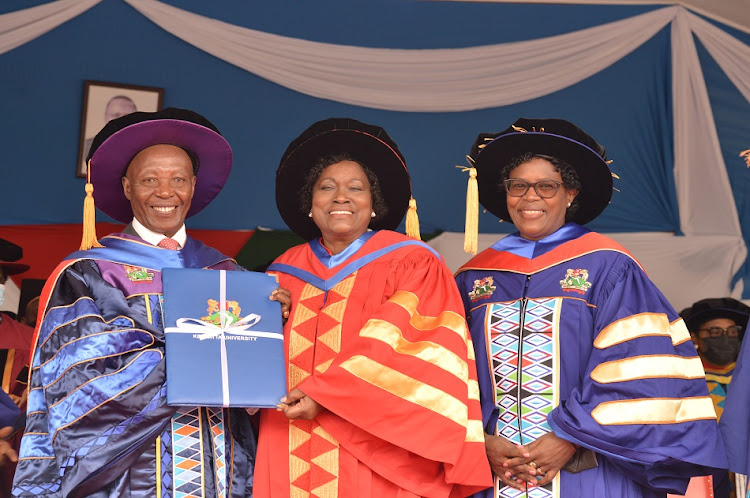 The award, also known as Honoris causa (especially of a degree awarded without examination), was given to Pratt at the 51st university's graduation ceremony held on Friday.

The university awarded her the degree in recognition of her passion, commitment, and distinguished service to People Living with Disabilities (PWDs).

The institution noted that Kristina has been involved in numerous special education associations and schools in so many years.

Kenyatta University noted that because of her commitment to the PWDs and her appointment as Ambassador of the Visually Impaired to Africa by UNESCO in 1977 she was to be given the award.

She was nominated to receive the award because of her contribution to serving the community and people with disabilities.

She is also the founder of facilities for the disabled and an ambassador for the visually impaired in Africa.

"In 1978, I set up the Kenya Institute of Special Education (KISE) in the Kasarani district, where teachers for the blind, hearing impaired and mentally disabled are trained," she wrote.

Says he hopes his efforts will motivate young KDF leaders towards knowledge seeking.
News
6 months ago

It is not about rewarding WHO but ensuring basic Kenyan laws are respected.
Opinion
6 months ago

Was KU VC John Wainaina right in disobeying executive order?
Poll of the day
6 months ago
Post a comment
WATCH: The latest videos from the Star
by BERTHA OCHOMO
News
22 July 2022 - 12:56
Read The E-Paper