The Sh 89 billion expressway beat the Ngong - Suswa Road, the four bypasses, SGR, Kenol - Marua Road and the Nairobi Commuter Rail to get the award.

•The expressway seeks to decongest Mombasa Road, Uhuru Highway and Waiyaki Way but has experienced traffic since it was opened for the public . 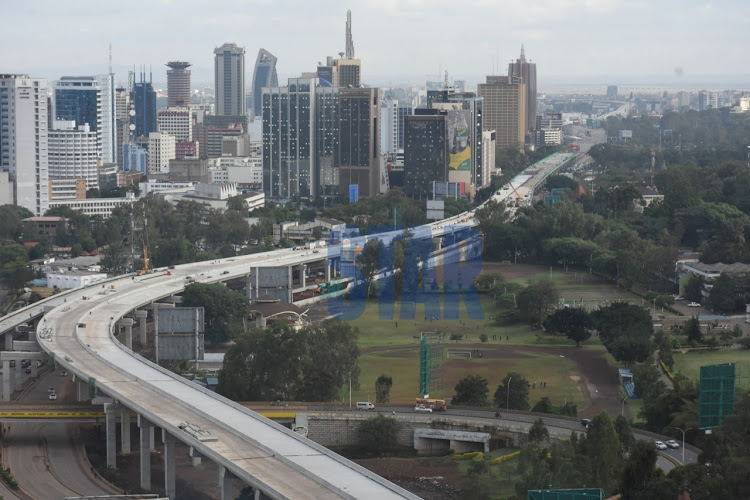 The ongoing construction of the Nairobi Expressway on December 3, 2021. It is 75% complete. Image: MERCY MUMO

The newly commissioned Nairobi Expressway has been named the best Road Transport Infrastructure of the year during the Afrika Mashariki Transport Awards.

This is despite several accidents happening on the 27-kilometre Nairobi Expressway in the past one month.

Moja Expressway Company, the firm charged with managing the roadway, celebrated the victory and thanked Kenyans for their support in the event which took place on Friday.

"We won the Transport and Infrastructure Award at the Africa Mashariki Transport Awards yesterday (July 15). Thank you so much for voting for us," they stated.

The government has added more expressway registration points in strategic city locations to lure motorists to use the road .

This is despite traffic snarl ups being witnessed at key entry and exit points of the road, which was opened to the public for test run on May 14.

To start using the expressway, motorists were required to visit the main Service Centre at Nairobi Expressway Plaza along Mombasa Road and fill in the Service Subscriber Registration Form.

However, since last month , Moja Expressway company has announced various points in Nairobi where interested motorists can register and seek information on the expressway.

Moja Expressway, a subsidiary of China Road and Bridge Corporation and the firm managing the road, has been scanning cars at the entry points and charging toll fees at the vehicle exit points.

The MTC operates like a credit card, and will be periodically topped up through electronic payments. It will cost you Sh1,300, including Sh300 service charge.

The Sh1,000 is loaded on to the card. The MTC users get a pass voucher at the entry point, which will be submitted at the toll station before exiting.

With the pass voucher, the toll station will calculate the amount to be deducted depending on the entry point and the distance covered.

Motorists opting to use the ETC service, which offers fast and easy transit, are not subjected to many hitches. They have the On-Board Unit device, a communication device mounted on vehicles.

One will be required to produce the national ID and the logbook of the vehicle being registered at a cost of Sh3,000, comprising Sh1,000  service charge and Sh2,000 to be loaded onto the card.

Once they get to the entry point, the device is detected by the screens and automatically granted access to the expressway in about two minutes.

The expressway seeks to decongest Mombasa Road, Uhuru Highway and Waiyaki Way but has experienced traffic since it was opened for the public.

Transport Cabinet Secretary James Macharia had announced that over 31,000 vehicles have used the Nairobi Expressway every day since it was opened on a trial basis.

The trial run, President Uhuru Kenyatta said in May, would enable his administration identify sections of the road that needed to be polished up before it's official launch.

With payment using M-pesa being prohibited, motorists are forced to queue as they pay cash. This leads to traffic build up.

Once the road is officially opened, only motorists with the On-Board Unit for Electronic Toll Collection Service or the Manual Toll Collection will be allowed to access.

The road has 11 tolling stations, 54 toll plazas, 54 cameras along the  27km expressway, with 126 cameras inside the toll plazas.

The road is monitored with recordings being done at 30 minutes intervals.