Ruto has no respect for women, says Raila over attack on CS Wamalwa

Raila faulted Ruto for referring to CS Wamalwa as a ‘woman.’ 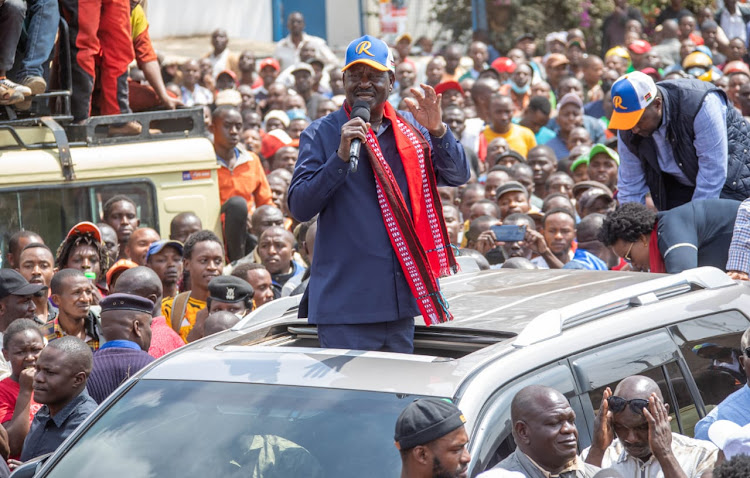 The Azimio la Umoja One Kenya Alliance brigade led by Raila Odinga has said Deputy President William Ruto has no respect for women.

However, on Tuesday while responding to Wamalwa the DP said, “In our community, we do not slap women, we respect them.”

Ruto spoke in Trans Nzoia during his campaign tour.

On Wednesday, during a tour in Kwale County, the Azimio team accused Ruto of a lack of respect for women in the country.

They said that the DP should be ashamed of equating Wamalwa to a woman, which can also be said to be undermining the female gender.

Speaking at Samburu in Kwale County Raila said Ruto has disappointed the fellow men of this country “for calling another man a woman.”

"What kind of man are you, calling CS Wamalwa a woman?" posed Raila.

The ODM leader said Ruto has sensed defeat and should therefore step aside instead of expressing his anger by disrespecting other leaders and ordinary citizens.

He strongly condemned Ruto and termed his “utterances as useless and baseless.”

Raila said the Azimio government has respect for all citizens, irrespective of gender, religion and tribe.

"If he can insult a CS, what about local citizens?" she posed.

Karua said Ruto has a history of disrespecting his workmates and boss, saying that he has disrespected President Uhuru Kenyatta many times.

She cautioned residents against falling for the Wheelbarrow's agendas, adding that Ruto will make them suffer.

"If you know someone's behaviour, kindly keep off because if you give them the power they will hurt you," she said.

Karua said Ruto is not fit to be president because he simply wants to benefit himself.

Junet said Ruto has abused the whole of Bungoma people and Kenyans.

He said angry leaders like Ruto should not be allowed to lead the country.

“Ruto should be ashamed of himself. He should respect women,” said Junet.

The MP said Ruto is faulting the opinion polls showing that Raila is ahead of him because he knows he has already lost.

He said there is no way Ruto will defeat Raila.

"This time around Raila will win by 70 percent and Ruto should accept defeat. He should not cause chaos," he said.

Kenneth said Ruto should come out openly and apologize to the public.

He said the DP should explain his words to citizens and what he met when he called Wamalwa woman.

Joho said Ruto's true nature has been showcased by his actions of disrespect.

During the Kwale tour, Raila said he has solutions to the challenges facing coastal residents.

"We have the answers to your problems. What remains is leadership," he said.

He said if elected he will implement the promises within the first 100 days in power.

Karua said Raila qualifies to succeed Uhuru because he cares about the well-being of Kenyans.

Karua said the ODM leader fought for devolution which is now benefiting citizens.

She said Kenya has seen massive development because Raila has been there helping the government implement crucial projects.

Karua said the Azimio government will respect and accommodate all.

"Let me tell our opponents when Raila becomes president they will be served fairly and protected because they are Kenyans," she said.

She said Raila is a good man and doesn't hold grudges.

Ruto under fire over remarks against CS Wamalwa