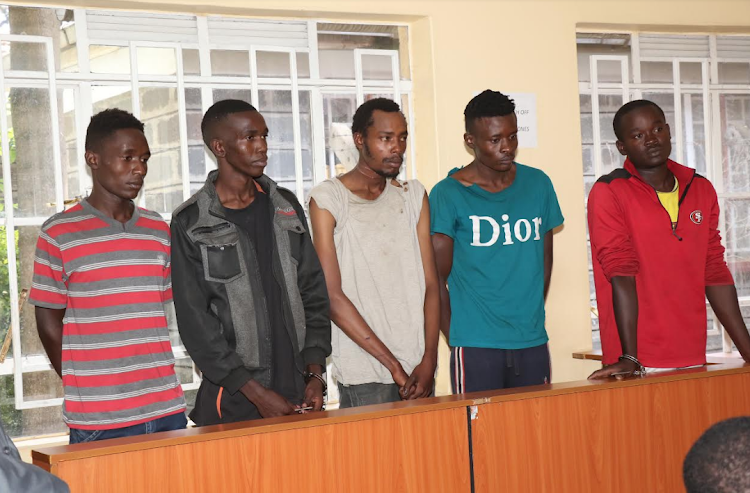 Detectives have been allowed to detain for 14 days six suspects who were last week arrested for multiple killings of women in Nakuru county.

Principal magistrate Charles Ndegwa sitting at the Nakuru law courts allowed an application by police corporal Kennedy Mwachi to have the suspects held for two more weeks to allow police to complete their investigations.

Evans Michori Kebwaro, the key suspect in the murders, was the first to be arraigned before Dennis Alusiola, Dicky Wanjala, Julius Omondi, Isaac Kinyanjui and Josphat Simiyu were paraded before the magistrate.

Corporal Mwachi, who is attached to the Directorate of Criminal Investigations in Nakuru North subcounty, told the court detectives wanted to conduct DNA and mental assessment on all the suspects.

Ndegwa directed that the suspects be held at the Kiuguini police station in Bahati constituency.

Michori, who is the key suspect in the murders, was the first to be arrested after detectives smoked him from a hideout in Keroka, Kisii county, on Thursday. The arrest followed a manhunt launched by police after he went into hiding.

Detectives nailed him after tracking a mobile phone that was stolen from one of the murdered victims. The phone was found with him.

The search team involved officers from Crime Research and Intelligence Bureau who were augmented by their Special Services Unit counterparts.

Authorities said Michori is a jailbird with a criminal history. He is suspected to have masterminded the killings.

At least three women were mysteriously murdered in a span of two weeks in Mawanga area of Bahati constituency in bizarre killings that left residents shocked. Some fled the area.

They said the thugs attacked in broad daylight and stole valuables.

Among those killed was Diana Opicho, 25. She was the daughter of Bishop Jotham Opicho of the All Nations Church. Diana was found murdered in her house.

Family member Justus Juma told reporters the suspects entered the homestead at about 2pm after posing as electrical technicians.

"There was no sign of forced entry. She must have let them in willingly before they killed her," Juma told the Nation.

Susan Wambui, 36, was murdered a week earlier in front of her three-year-old son before the attackers set her house on fire. The baby was rescued. Autopsy showed she had been strangled.

On June 14, in Kiamaina, Grace Wanjiku, 20, was found burnt beyond recognition under a heap of bedding in a house that had been razed by a huge fire. Attempts by first responders to extinguish the fire proved futile, until fire engines from the Nakuru county arrived.

A high-powered government delegation led by Interior Cabinet Secretary Fred Matiang'i toured the area and ordered a manhunt for the criminals.

Nakuru county criminal investigations officer Anthony Sunguti said Michori was arrested in Kisii and immediately ferried to Nakuru where he gave leads on his accomplices.

Sunguti said the suspect identified five of his gang members and led to their arrest at a rented house in Kivumbini estate. 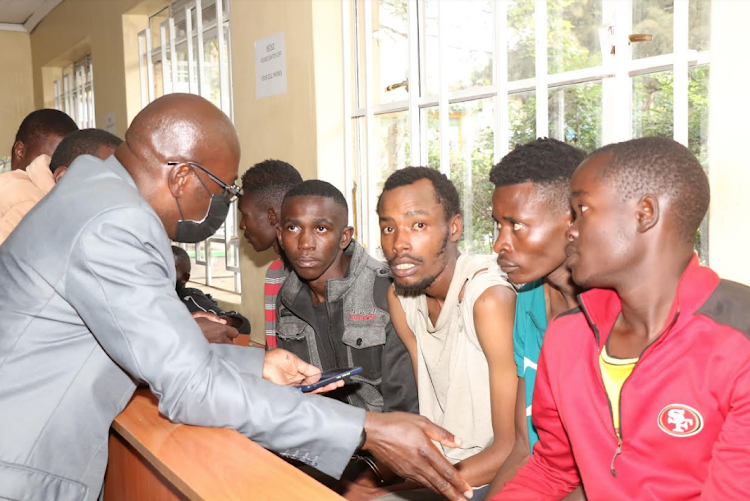 The suspects when they were arraigned before a magistrate's court in Nakuru on Tuesday July 5, 2022.
Image: BEN NDONGA

The five suspects were arrested after the main suspect revealed his accomplices.
InPictures
6 months ago

Sunguti said the suspect identified five of his gang member.
News
6 months ago