A study found that PWDs have a hard time especially when accessing public transport.

• A baseline survey by Flone Initiative conducted in Nairobi, Kiambu and Machakos counties found that PWDs have a hard time especially when accessing public transport.

• PSVs lack enough leg-room for people with physical disabilities, those with wheelchairs are asked to pay double the fare so they can be carried by matatus or Boda Bodas 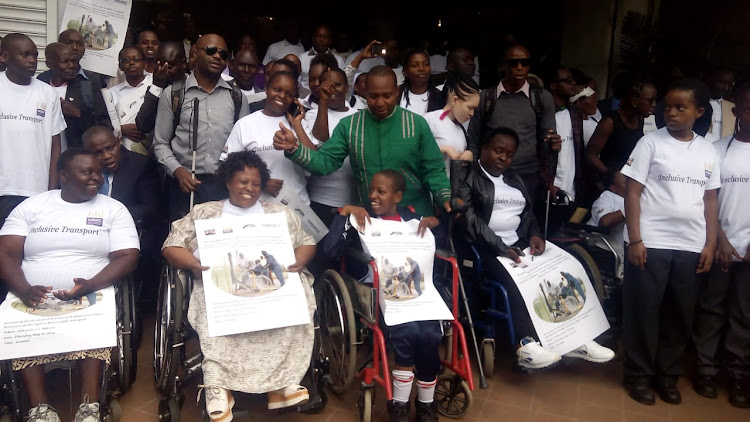 Persons with disability procession during the unveiling of a disability friendly public service vehicle.
Image: FILE

Persons living with disabilities endure numerous challenges when accessing public places in Nairobi and they want that changed.

A baseline survey by Flone Initiative conducted in Nairobi, Kiambu and Machakos counties found that PWDs have a hard time especially when accessing public transport.

“Most Public service vehicles (PSVs) lack enough leg-room for people with physical disabilities to their legs, while some who use wheelchairs are asked to pay double the fare so they can be carried by matatus or Boda Bodas,”Flone’s Executive Director Naomi Mwaura said.

A working group sector committee meeting comprising Flone Initiative, representatives of PWDs in Nairobi, the Nairobi Metropolitan Services as well as officials from the County government of Nairobi discussed the challenges.

Mwaura said that they found that the transport sector was lacking in the inclusion of PWDs.

He added that PWDs are also harassed as touts push and shove them aside when competing for passengers.

“Sometimes this leads to their mobility aids and luggage getting lost or damaged because they are handled poorly,” she said.

This was after matatu operators and commuters cried foul of confusion, traffic snarl-ups, and long queues that marred the test run which began in the morning hours.

Collins Ombajo from the Action Network for the Disabled (ANDY) said the bus park isn't user-friendly to people living with disabilities.

He said that the distance from the Greenpark to the Nairobi Central Business District (CBD) is a huge and matatus and Boda Bodas are not allowed into certain parts of the city center.

Ivan Omondi, a visually impaired person, said that even if a PSV helps a PWD access the city center, they would still be arrested by County Officers as it once happened to him.

Elizabeth Njoki, a matatu conductor, asked the county government to be lenient to motivate matatu crew in aiding PWDs access the CBD.

“Most PSVs are willing to drop off PWDs wherever they wish to alight but because we know the county officials will arrest and fine us, we choose not to. It is not that we do not want to carry them,” she said.

The working group sector committee is set to meet again in a month to discuss how to make it possible for PWDs to more easily access the city centre.

Matatu Owners Association criticized the test run stating that the terminal itself was already a failure.
News
1 week ago

Matatu Owners Association chairman says it was placed on the wrong side which will result in more congestion
News
1 week ago
WATCH: The latest videos from the Star
by SELINA TEYIE
News
23 June 2022 - 18:22