The County government has dispatched counselling psychologists to attend to victims.

• Deputy Governor Francis Maliti said the administration has set up registration desks at the scene of incident to register the victims and counsel them.

• Over 500 traders were affected by the inferno that broke out at around 1.00pm on Monday. 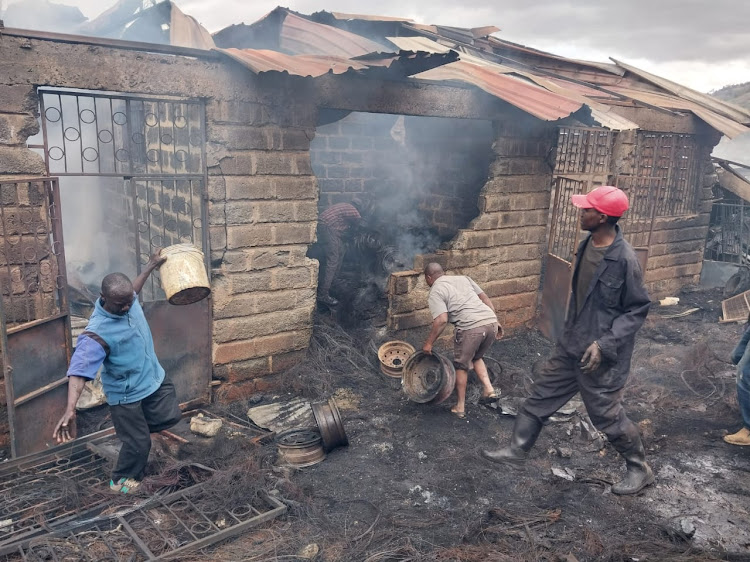 Traders at Grogon market in Machakos County on Tuesday try to salvage what was left of their property after fire gutted their business premises on Monday, June 6, 2022.
Image: GEORGE OWITI

Deputy Governor Francis Maliti said registration desks have been set up at the scene of incident to register the victims and counsel them.

He said teams of counselling psychologists have been dispatched to attend to the victims.

Over 500 traders were affected by the inferno that broke out at around 1.00pm on Monday.

Most of the traders lost property and other valuables including documents, money and structures.

Maliti said poor access led to the loss since fire engines could not get to the scene on time.

The fire gutted structures for more than eight hours before it was contained by fire engines from the Mavoko subcounty.

Maliti sent a message of comfort to the victims saying the county government will reach out to various agencies including Kenya Red Cross for intervention.

He said the county government will look for ways to support the v ictims.

Some of the victims said they lost property worth over Sh3 million in the tragedy.

One victim said she woke up a millionaire but went to bed a pauper.

UDA national chairman Johnson Muthama said they will support the victims through a special fund.

He donated Sh20,000 towards the account's opening and condemned politicians who were using the tragedy to play politics.

Musyoka said she has been doing business in the market since 2003.
Counties
8 months ago

Fire breaks out at a Machakos town market