Less than 100 mountain bongos are left in the wild.

• The animals are shy and skittish. They are found in thick forests. 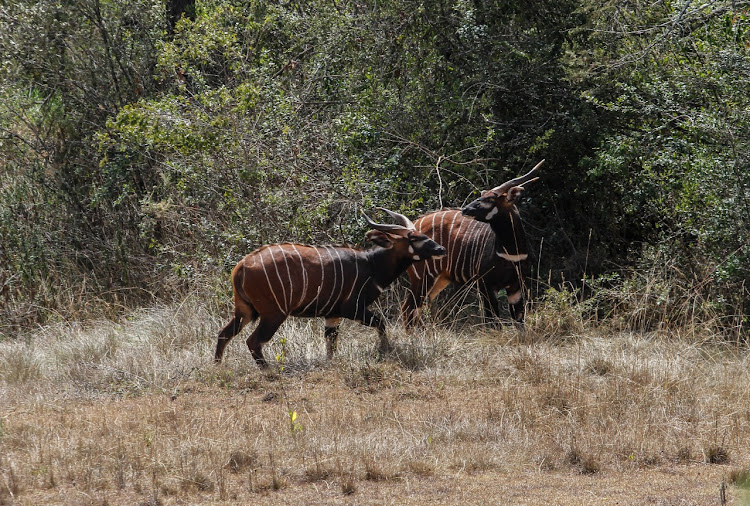 Two mountain bongos after they were released into the Mawingu Mountain Bongo Sanctuary Image: ENOS TECHE

At least 1,000 indigenous trees have been planted at Mount Kenya Wildlife Conservancy as part of efforts to preserve the world’s first Mountain Bongo sanctuary.

Less than 100 mountain bongos are left in the wild.

Dalbit Petroleum Ltd planted the trees on Friday as it marked its 20th anniversary.

The tree planting drive is being done in partnership with local communities.

The conservancy targets to plant 5,000 indigenous tree species this year.

Dalbit CEO Timothy Skudi said, “We are delighted to mark 20 years of fuelling regional growth across East, Central and Southern Africa. We have been instrumental in providing total energy solutions that have supported African businesses to drive economic growth and higher living standards."

Skudi said that while fuelling growth, they have also sought to create a lasting impact for the communities they serve.

He said they have helped address some of the greatest social challenges facing the region, including energy access, health, the environment and biodiversity.

"This tree planting is part of this impact, and we are thankful to the local community and stakeholders who have come to contribute to this sustainable action for our country.”

In Kenya, Dalbit has played a leading role in supporting the government’s efforts to combat climate change through forest and landscape restoration.

The government is seeking to increase the country’s tree cover from the current 7.2 per cent to at least 10 per cent by the end of this year.

On March 9, five mountain bongos were released into the wild.

The bongos were moved from their breeding place to their new home-the Mawingu Mountain Bongo Sanctuary.

The programme is aimed at improving the population of endangered species in Kenya.

"The bongos that were moved into the sanctuary have acclimatised well to the area. They are able to find water and browse normally. We have caught them on trailing cameras drinking water in late evenings and at dusk, which is their natural rhythm in the wild," he said.

The mountain bongo is one of the largest forest antelopes.

The animals are shy and skittish. They are found in thick forests, thus making it difficult to be easily sighted and counted.

Most of the sightings are opportunistic and use indirect methods, such as dung.

For the captive population in Mount Kenya Wildlife Conservancy, physical sightings and individual ID is used.

In Kenya, bongos are accorded full protection under the Wildlife Conservation and Management Act, 2013.

The subspecies once roamed in large numbers but has suffered unprecedented population decline since the 1950s due to poaching, live trade, predation and disease.

However, it has not yet received the same level of international attention as the 'Big 5'.

Mountain Bongo is shy and skittish; It is found in thick forests thus difficult to be sighted and counted.
News
2 months ago
“WATCH: The latest videos from the Star”
by GILBERT KOECH News Reporter
News
22 May 2022 - 23:00