Dons oppose proposal to give Magoha power over varsity councils 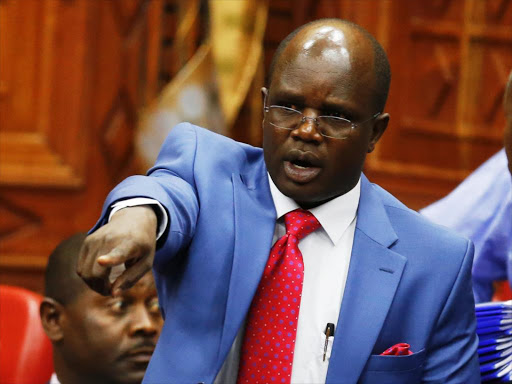 NO WAY: UASU secretary general Constantine Wasonga during a meeting with the Parliamentary Education Committee on April 12, 2018
Image: JACK OWUOR

Several education stakeholders have opposed a proposal that sought to give Education Cabinet Secretary George Magoha mandate to revoke decisions made by varsity councils.

According to a report submitted to the National Assembly, lecturers and one member of a university council opposed the plan.

The new provision in the Bill seeks to allow the CS to revoke appointment and also transfer council members.

“Deploy members of councils, review or vacate council decisions and give approval to a council seeking to meet more than a four times a year,” the report reads.

For instance, when the University of Nairobi appointed the current VC Stephen Kiama, Magoha rejected.

Magoha had revoked the appointment of Kiama and dissolved the university council citing ongoing ‘further consultations.'

The submission signed by UASU secretary general Constantine Wasonga revealed that if approved, this amendment would give the CS too much power.

Wasonga added that the CS should not have the power to transfer members of the university council.

“The membership of the university council and vice chancellor should be carefully balanced to keep off communities from holding the university administration against their political interests,” he said.

However, the union agreed that the ministry should have a say in some decisions made by universities.

“As the appointing authority the CS must have control over certain decisions that the council makes,” he said.

On appointment of council members, UASU requested for its representation during the selection.

“UASU should nominate a representative to the council, it’s a practice that was available in the statutes that were repealed,” he said.

Mumera said the proposal will reduce independence and sought that it should be scrapped.

“This provision compromises autonomy of councils under overarching CSs or other higher echelons of state,” he said.

The ministry in a report, defended the new proposal saying it allow for regulation of decisions by the government.

“The proposal allows the CS to take appropriate action as necessary and in the public interest to ensure proper governance,” the report reads.

Another proposal touching on the running of councils touched on the length of their terms.

In the new dispensation, the council members are meant to serve for three years so their time expires differently.

Currently, the members vacate office at different times, that is after three or four years.

“Staggered appointments will ensure continuity in the activities of the council,” the ministry said.

The University Act is the supreme authority guiding governance of the institutions.

The councils are the main decision-making organs in the universities

The councils have, however, faced serious fallouts with the university management in the recent past.

"The VC of a public university should serve a 3 year term renewable once upon satisfactory service,"Wasonga said.

Proposal to halt admission to private universities was first fronted in 2020.
News
11 months ago