The ODM leader spoke ahead of his rally at Mkomani in Mombasa.

•Raila said ODM is still intact in Mombasa and the larger Coast region.

•"We have just started. We are talking to our people," he said. 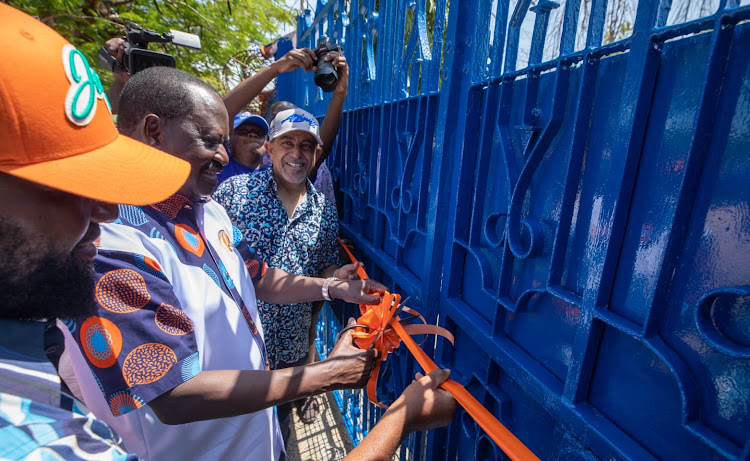 Azimio la Umoja Flag Bearer ⁦RailaOdinga during the opening of the Azimio Center Mombasa Branch on May 14, 2022.
Image: ODM

ODM leader Raila Odinga has dismissed claims his party is losing popularity at the Coast.

Speaking in Mombasa as he opened the Azimio Centre in Nyali, Raila said ODM is still intact in Mombasa and the larger Coast region.

"We have just started. We are talking to our people," he said.

The former Prime Minister said those spreading rumours that ODM is dwindling at the Coast are fear mongers who are themselves scared.

He said the party has only encountered small problems over the party nominations.

"But those wounds are slowly healing," Raila said.

He said his party has policies to revive the economy of the Coast.

The Azimio La Umoja One Kenya Alliance presidential flag bearer said his administration, should he clinch the presidency, will prioritise the operationalisation of Dongo Kundu Special Economic Zone so as to create jobs for Mombasa people.

He noted those who are spreading falsehoods about ODM are the same ones who are lying to Mombasa residents that they will return the port services to where they stole them from.

"They took away the ports services from Mombasa. Now that they want votes, they lie they will return them. Only Azimio can return the port services back to Mombasa," Raila said.

The ODM leader spoke ahead of his rally at Mkomani in Mombasa.

Sonko was forced to leave the event as police lobbed tear gas to disperse the crowd.
News
2 weeks ago
WATCH: The latest videos from the Star
by BRIAN OTIENO Correspondent, Coast Region
News
14 May 2022 - 17:55