The opposition chief was on a campaign trail in Kinango, Kwale county.

•The opposition chief was on a campaign trail in Kinango, Kwale county when he accused the ex-governor of running away from him even after he successfully introduced him into the rocky world of politics.

•He said Kwale Governor Salim Mvurya, who was first elected on an ODM ticket in 2013, has betrayed him by siding with Deputy President William Ruto. 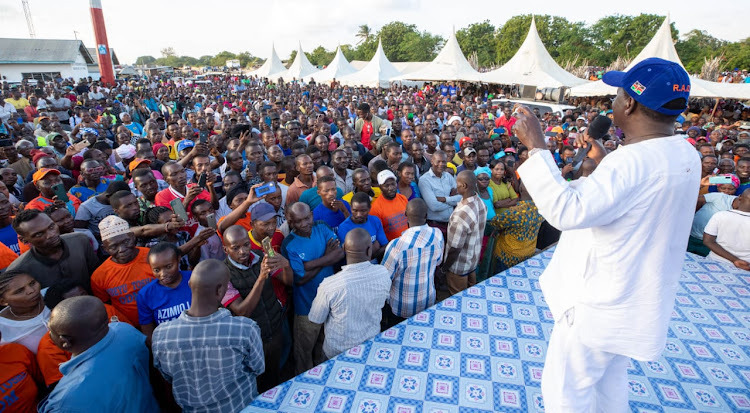 ODM leader Raila Odinga in a campaign trail in the Coastal region on May 11, 2022.
Image: RAILA ODINGA TWITTER

The opposition chief was on a campaign trail in Kinango, Kwale county when he accused the governor of running away from him even after he successfully introduced him into the rocky world of politics.

He said Mvurya, who was first elected on an ODM ticket in 2013, has betrayed him by siding with Deputy President William Ruto.

In 2013, Raila says the Kwale governor was a novice in politics and he helped him become the formidable politician he is today.

“He (Mvurya) was brought to my office in 2013. He could not even express himself in public, but I helped him become the first governor here. He has now decided to join the other side, we have no issue with that,” he said.

In the governor race, Mvurya is campaigning for his deputy Fatma Achani to take over from him. Achani is vying on a UDA party ticket.

Raila rallied the Kwale citizens to vote for Hamadi Boga, who until recently was serving as the Principal Secretary for Agriculture.

“Boga has proven beyond any doubt that he will bring change in Kwale,” said Raila.

He also used the opportunity to sell his manifesto to the residents saying he is best placed to solve the problems of the coastal people.

He divulged that a number of development projects being run in the Coastal region were conceived when he was serving as a minister in the late former President Mwai Kibaki's administration.

“I was personally involved in the drawing and designing of these road projects. Some have since taken off, but some are yet to start. When we take over in August, we shall embark on all the pending major road projects in this region,” he said.

“All these projects are my brainchild. I came to this place when you could not access it by road. We shall therefore ensure that they are achieved in our government,” Raila said.

The ODM boss said his government will also fast-track the construction of the multi-billion Mwache Dam project, which will help revive agriculture and supply enough water to the residents.

Mama Ida: Vote for Raila to spur his legacy

Raila is eyeing the presidency for the fifth time.
News
1 week ago

Prepare for a rude shock in Western - Mudavadi warns Raila

Mudavadi claimed Raila has been the greatest beneficiary of his hard work and sweat.
News
1 week ago
“WATCH: The latest videos from the Star”
by CHARLES MGHENYI Chief Correspondent, Coast Region
News
13 May 2022 - 16:48