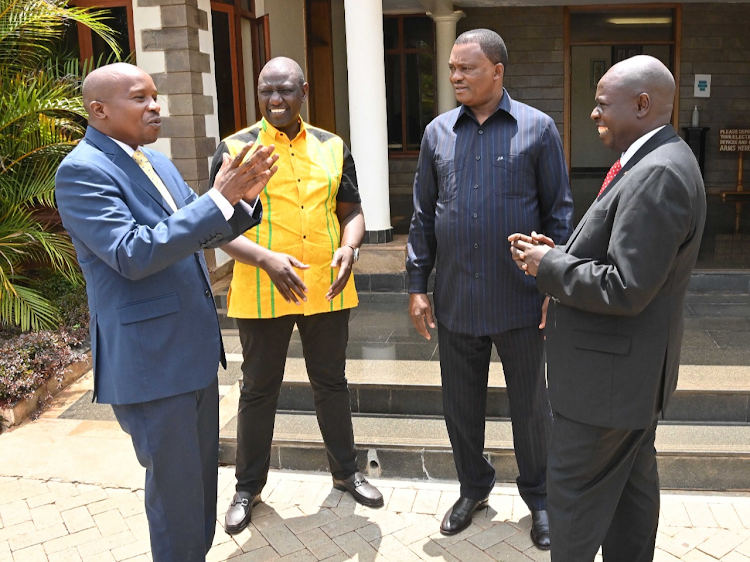 Land grabbing allegations levelled against Deputy President William Ruto will not be discussed in the National Assembly, Speaker Justin Muturi ruled on Tuesday.

The Speaker threw out the documents tabled by Wajir MP Fatuma Gedi on the land grabbing allegations saying they were inadmissible for want of procedures.

He said the lawmaker did not follow the laid down rules for submission of documents, further calling out the Woman Representative for attempting to discuss Ruto’s conduct through the backdoor.

The rules require a substantive motion be tabled in the House after a three-day notice, before the conduct of any leader whose impeachment rests with august House is discussed.

“It is clear that, the direction Hon Fatuma Gedi was taking this House would circumvent the procedure laid out in Standing Order 87 by discussing the conduct of such a person, without a substantive motion.”

Muturi directed Clerk of the National Assembly Michael Sialai to withdraw the documents and return the same to Gedi at the earliest time possible.

“In view of the foregoing, the matter is spent and there shall be no further substantiation or debate on it,” the Speaker ruled.

He said the sequence of events is that any member with such claims tables the documents and have Speaker confirm the admissibility.

Muturi argued the review was necessary “before any member proceeds to make further reference to the paper laid or to use them as evidence.”

“Indeed, this is also the same sequence in a judicial proceeding. However, the Hon member failed to comply with this requirement,” Muturi said.

He argued Gedi forfeited the opportunity to substantiate the claims against the DP as set by the Standing Orders.

“In view of the foregoing, the matter is spent in terms of Standing Order 91 and there shall be no further substantiation by the member or debate on it,” Muturi said.

Gedi presented to the House on April 14 newspapers printouts, photographs, court judgments and a written statement detailing her claims.

Muturi held that in his analysis of the documents, it emerged the court judgement was not certified and the documents tabled did not relate to the claims made by the lawmaker.

“I rule that the documents are inadmissible for failure to meet the threshold set by the rules of admissibility. Consequently, I direct that the documents tabled by the member be expunged from the records of this House forthwith,” he said.

Muturi cautioned members against making allegations they cannot substantiate, warning that such members risk being named as disorderly.

“It would be paramount for a member to be responsible for accuracy of any facts which a member alleges to be true.”

“Allow me to also caution members against making allegations which amount to discussing the conduct of a person whose removal from office requires a decision of this House without a substantive motion,” Muturi said.

In the same vein, the Speaker ordered Embakasi East MP Babu Owino out of Parliament precincts for the next five sitting days for disorderly conduct.

He directed Sergeants at Arms to bar the MP from accessing the chamber, committees, as well as any activities by Parliament.

Muturi said he spared the lawmaker the harsh verdict which his crime would have attracted —suspension for between 21 days to 90 days.

“It was clear that the member’s conduct was gross and unbecoming. I direct the MP to withdraw from the chamber and precincts for five days inclusive today pursuant to Standing Order 107,” Muturi said.

“If he is not in chamber today, he will not be allowed to access precincts, chamber, committee, or any House activities,” the Speaker added.

Owino was kicked out for refusing to heed orders to vacate the chamber on April 14 when Gedi sought to table documents on land grabbing allegations against Ruto.

“It has not escaped the attention of the members that he refused to leave. Due to the gross misconduct, I deferred the ruling to today.”

“For the committees, let it be noted that he will not attend as a member of the public. The proceedings of any committee that allows him to sit would be rendered a nullity,” Muturi said.

Nasa trio has been firing simultaneous salvos at DP Ruto.
News
1 year ago
“WATCH: The latest videos from the Star”
by MOSES ODHIAMBO Journalist and Political Writer
News
11 May 2022 - 05:00