Former city county boss is an independent candidate while Wanga is seeking seat on ODM ticket. Accusations are flying between ODM aspirants and their independent opponents as campaigns intensify in Homa Bay.

Kidero is an independent candidate while Wanga is seeking the seat on the ODM ticket.

The two want to succeed Governor Cyprian Awiti whose second and final term will end after the August 9 general election.

Kidero went independent after ODM handed the ticket to Wanga following a consensus meeting in Nairobi between the latter and other aspirants like Suba South MP John Mbadi and former Kasipul MP Oyugi Magwanga.

The meeting was attended by Awiti and ODM party leader Raila Odinga.

Kidero and businessman Louis Ogingo protested against Wanga getting the party ticket, saying they were not invited to the meeting.

The former Nairobi governor has since hit the ground running, asking residents to reject Wanga at the ballot on grounds that she was un-procedurally handed the ODM ticket. 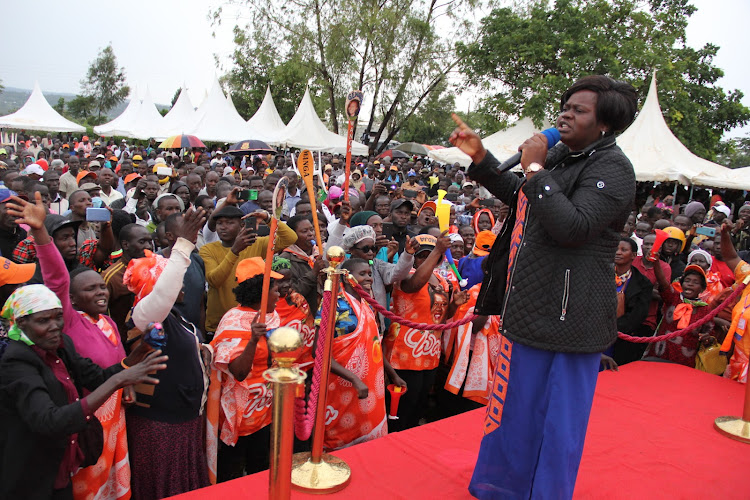 Several politicians have since joined Kidero in his campaigns, protesting that they were shortchanged in the ODM primaries.

They accuse Wanga of colluding with ODM National Elections Board officials to give their preferred aspirants the party tickets. The party conducted its primaries in Homa Bay on April 14.

“We must stop Wanga and her accomplices from ascending to any political leadership in Homa Bay because they messed up with ODM primaries. Let’s reject them and send them home,” Kidero said.

The majority of ODM MCA aspirants and those seeking parliamentary seats are facing rebellion from residents due to the manner in which they got the party tickets.

The party conducted primaries in 38 wards, Ndhiwa and Karachuonyo constituencies and for the woman representative post.

Kidero argued that Wanga and allies are now causing voter suppression by telling residents that they will be declared winners after elections.

“They have sensed defeat, that’s why they say they will be declared winners. Such intimidation and threats can create voter apathy, which is against a popular vote for Raila’s presidential quest,” Kidero said.

Independent candidates are running for all the eight MP seats and 40 wards.

Kambona wants residents to reject Kajwang on grounds that he failed in his oversight role.

“Homa Bay government has a lot of audit queries due to weak oversight role played by Kajwang,” he said.

On Friday, Wanga told Kidero to prepare for a resounding defeat on grounds that he is selling an unpopular political agenda in Homa Bay.

“Kidero must agree with the consensus outcome because he was the one who was pushing for it. He boycotted the consensus meeting without giving clear reasons,” Wanga said during the homecoming party of MP Were in Oyugis, Kasipul constituency.

Wanga played an audio clip where Kidero is heard purportedly asking the party to use consensus method to nominate the governor candidate.

“He was given a direct ticket in 2013 and 2017 to contest governorship in Nairobi. Kidero shouldn’t be criticizsing us because he has also been a beneficiary of a free ticket,” she said.

Kajwang asked residents to vote in only ODM candidates to make the party strong.

“We’re calling for six-piece voting because ODM is the house we have in Azimio-One Kenya coalition,” Kajwang said.

Kidero announced his intentions to run independently on Saturday.
News
1 month ago

No power-sharing agreement reached yet with running mate Oyugi Magwanga.
Siasa
1 month ago
by ROBERT OMOLLO
News
09 May 2022 - 07:57