My track record places me above Raila – Ruto

The DP challenged Raila to show Kenyans his development initiatives before seeking the presidency.

• The DP who was speaking at Busia stadium said his servant leadership characteristics cannot be matched with Raila's.

• He said Kenyans should thus shift their support to him as the country moves towards holding the August 9 General Election. 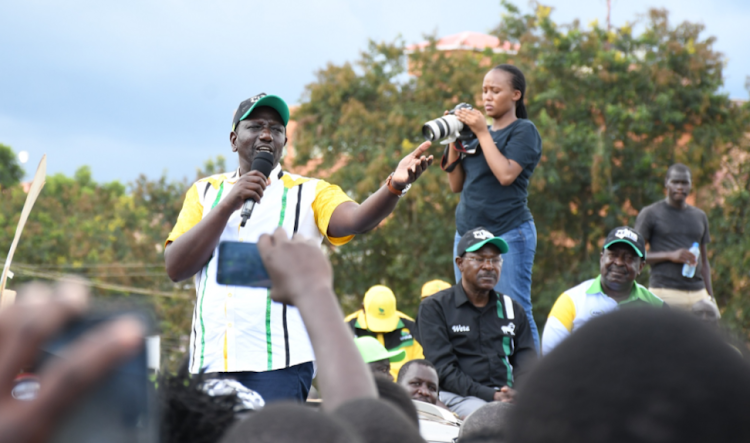 Deputy President William Ruto has said his presidential contest against ODM leader Raila Odinga is not as competitive as Kenyans may think.

The DP who was speaking at Busia stadium on Saturday said his servant leadership abilities cannot be compared to Raila's.

"The competition between me and Raila is not a beauty contest," Ruto said.

"As the Deputy President of Kenya, I helped build the road that connects Busia and Malaba. I also helped extend the same tarmac road to Angu'urai and to Moding and Malakisi.

What has that man who speaks in parables done for you the people of Busia?" Ruto posed.

The DP called on those backing the former Prime Minister's presidential bid to shift their support to him ahead of the August 9 General Election.

Raila, Ruto claimed, has little to show for the years he has been in leadership.

Ruto expressed confidence that the Azimio la Umoja presidential candidate and his allies do not have what it takes to scuttle his State House bid.

The DP said the bottom-up economic model championed by the Kenya Kwanza coalition will provide the best approach through which Kenyans from humble backgrounds can be uplifted economically.

A host of aspirants vying for various elective seats during the August polls in Busia county also attended the rally.

Mudavadi said recent statistics indicating that the Kenyan economy had grown by 7.5 per cent were unrealistic.

Majority of Kenyans, the former Sabatia MP said, do not feel the impact of the growth.

Wetangula said the Kenya Kwanza administration under Ruto will prioritize boosting cross border trade which he said supports thousands of livelihoods along the Kenya-Uganda border.

Bunyasi, Kuria and Jaguar said Ruto is a results-oriented leader who Kenyans should elect in August.

Ruto returns to Busia as Western vote hunting hots up

The DP returns to Busia a day after addressing an economic forum in Nambale.
News
1 month ago

The tour is part of his five-day campaign in Raila Odinga's Nyanza and Western turfs.
News
1 month ago

Raila has no capacity to fight corruption - Ruto

“Now, we know the true colours of Raila, especially in counties,” he claimed.
News
1 month ago
WATCH: The latest videos from the Star
by EMOJONG OSERE Correspondent, Busia
News
07 May 2022 - 22:29